Happy Memorial Day Holiday to those celebrating. Just a fast update on the efforts over this long weekend. 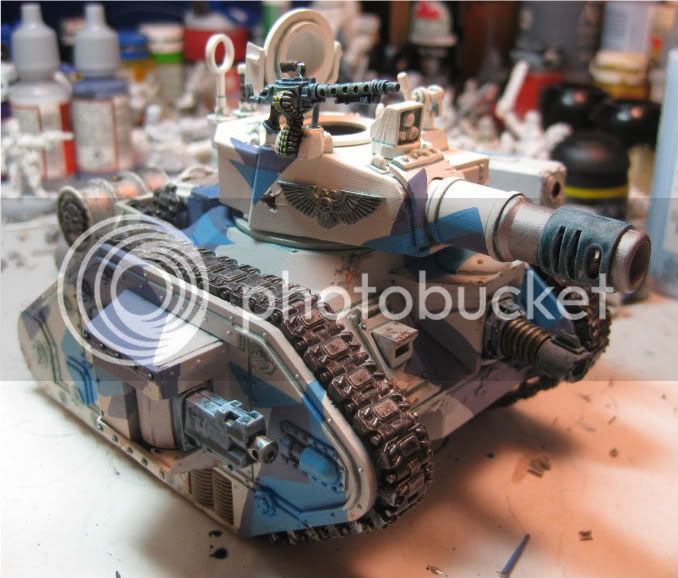 The 2nd Leman Russ is an update/partial repaint with a brand new battle cannon turret added on. I am working on a Pask model for the cupola too. Stowage and searchlight will be primed tomorrow for this tank. 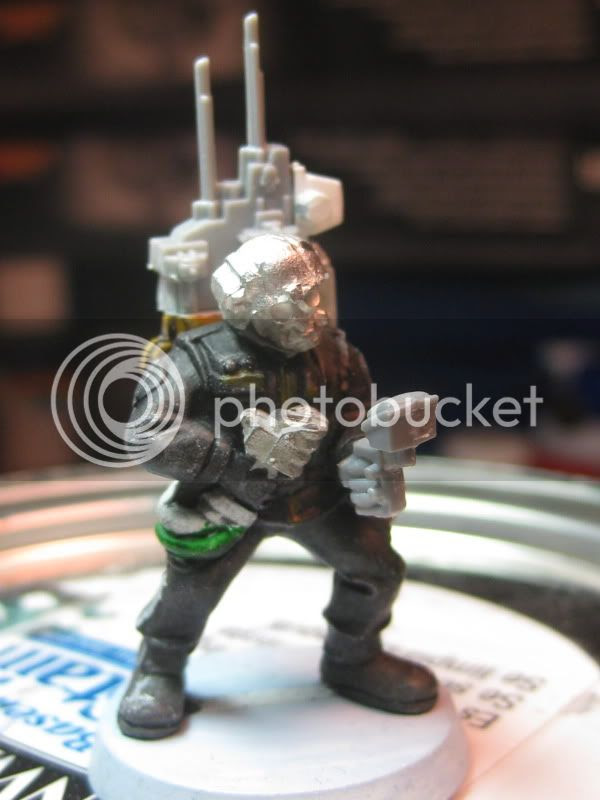 I built a Master of Ordnance out of an original plastic stormtrooper, Pig Iron gasmask/combat helmet head, conning tower from a BFG Chaos cruiser mated to a vox pack from the Cadian set, throttle control display hand from the sentinel pilot to act as a sort of auspex/ranging display and foregrip from metal autopistol as the top of his trigger device in his right hand. All-in-all a fast build and I think he conveys the look a preoccupied officer calling in a danger close fire mission would have. At very least, he was free to build if nothing else. 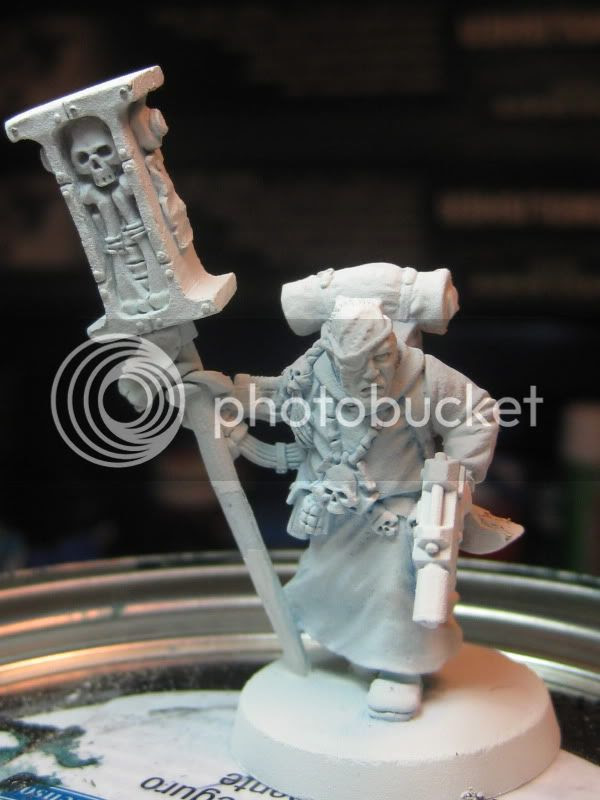 The Ministorum Priest is the original metal model with plasma rifle and arm cut off, filed and then a plastic tank commander arm glued on, with plastic pistol added. Catachan combat knife and canteen hide the chopped up waistline. I think I'm calling him Mad Eye Moody.
Posted by Yeti's Yell at 12:44 AM 4 comments: 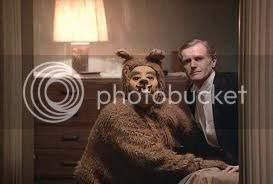 Not THAT kind of furry-scary. Actually, that's pretty accurate...
The PAGE group saw a furry, fun and rather scary Coreheim 3-way game Sunday night at the studio in downtown Philly, for what we hope is an ongoing trend in the club: steady forays into Mordheim.

Edit: See The Goblin perspective on Jason's Fine Blog SOuND OFF
Steven (Skaven) Jason (Goblins) and myself (Undead) knocked the dust off of our ancient Mordheim understandings and grafted on the fresh changes that Coreheim brings to the blasted lands of Mordheim in a gorgeous row that ambled about the board like a true monster. Rawr.
I brought my original Mordheim demo board that I built in... 2001? Stephen brought a great building ruin and I threw in my original cardstock Mordheim terrain. We elected for a king-of-the-hill scenario, winner controls the top floor of the center building. Crap! Zombies climb at Initiative 1! 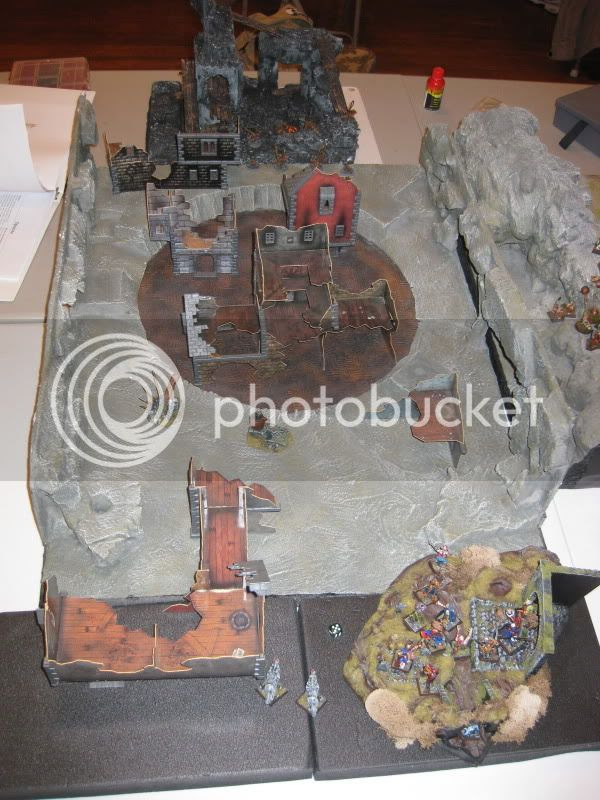 View from the Undead deployment area. The Skaven deployed opposite and the Goblins to the right.  The objective was to hold to third floor of the tallest ruin for 3 turns. 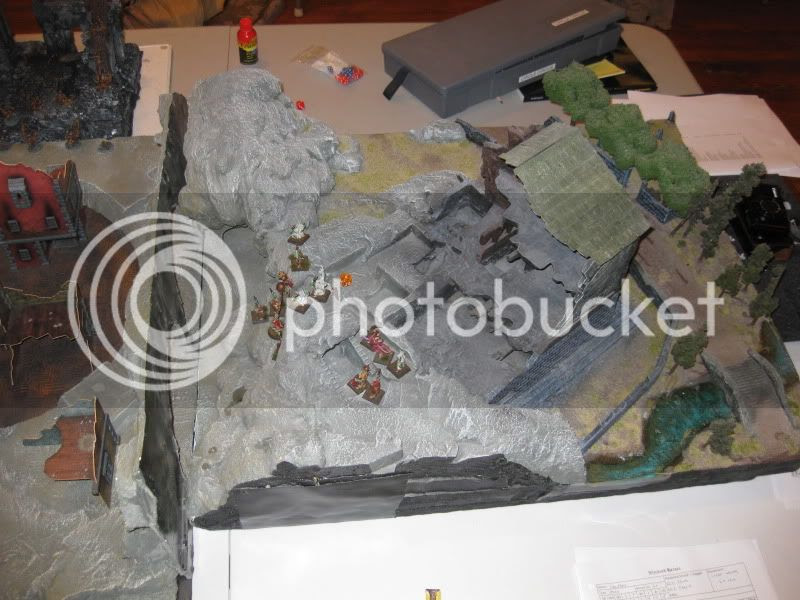 View of "the surface"
To get us up to speed, Ichabod and Ozzy, ghoulkin followers of the Vampire Lord, discuss their experiences following their Master into the crypts of Mordheim...

Ozzy: Uuuuugh, where am I? What happened?

Ichabod: You’ve been unconscious for hours. You’re bleeding from your eyes and ears and you are still a moron.

Ozzy: Is that good?

Ichabod: Sure, why not.

Ozzy: They took my shield. Then my net. Then my club. Then… my pants for some reason? But why?

Ichabod: Right. Just sit there and let me get through this. No, there. Sit! There! SIT!

Ozzy: Whose pants am I wearing now? Are these my pants?!?

Ichabod: Silence! Our lair was invaded. So when we got to the lower crypt, the Necromancer raised 7 zombies and sent them into the shadows of the ruins after the squeeks and snarls we heard in the dark, the Skaven interlopers. The zombies ignored the trauma to their putrid flesh as rocks rained down from the broken façade. Suddenly… 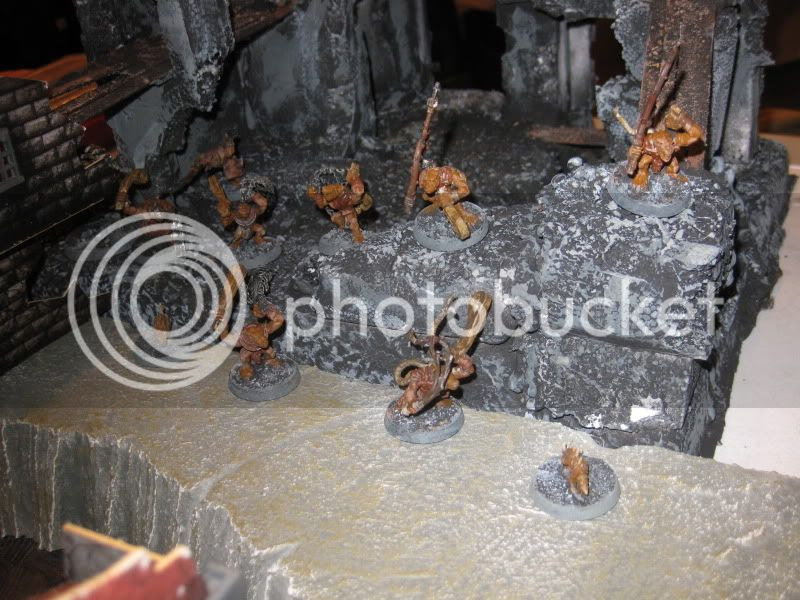 Ichabod: Shut up! Suddenly, we heard clamoring behind us as that wretched greenskin fungus known as goblin followed down the main stairs with spears, shield and all manner of savage intent. They must’ve followed us from the hinterlands! 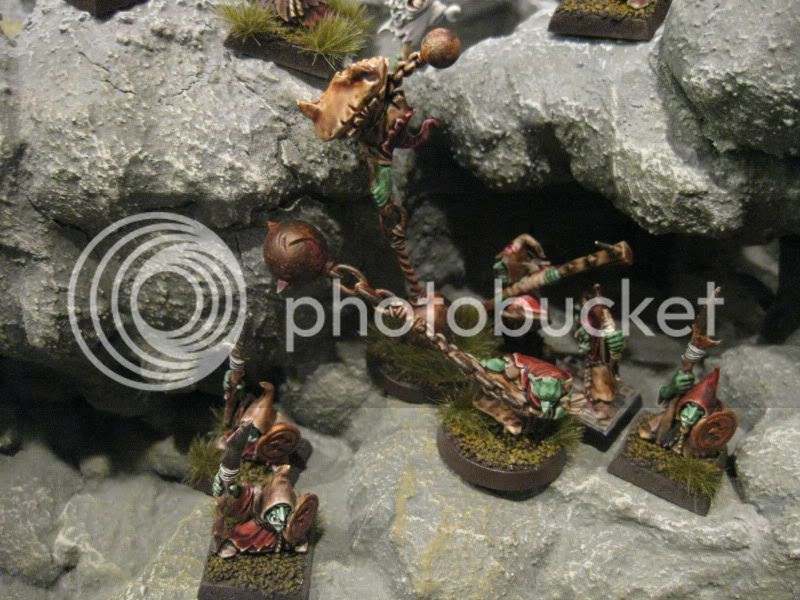 Ozzy: Why are my knickers filled with gravel?

Ichabod: That’s normal. So no sooner had the vermin lord skittered to the top of the ruins, exalting his claim on our territory, did our Master surge forward like a magnificent blur, incensed, his warspear wickering against the 3 vermin warriors that cowered at the base of the ruins. The dire wolves flanked around the left side of the ruins to trap the Skaven in the middle while the damned goblins hurled insults and arrows our way from the right. We couldn’t stop the Skaven as they crawled up through the ruins, they were too fast! 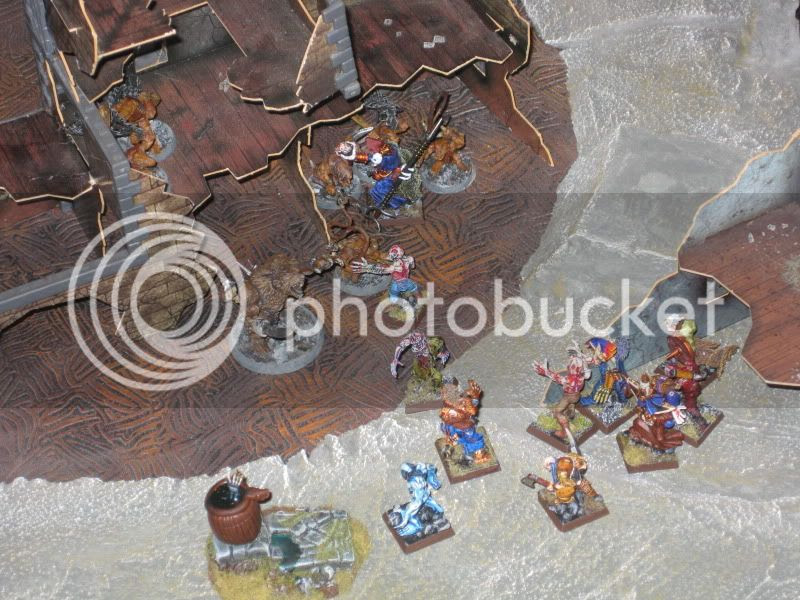 Ozzy: I named those mean doggys Rash Mouth and Drippy. I remember our Master was hit in the groin and belly and laid down on his back. A lot. And the Rat Ogre seemed nice... 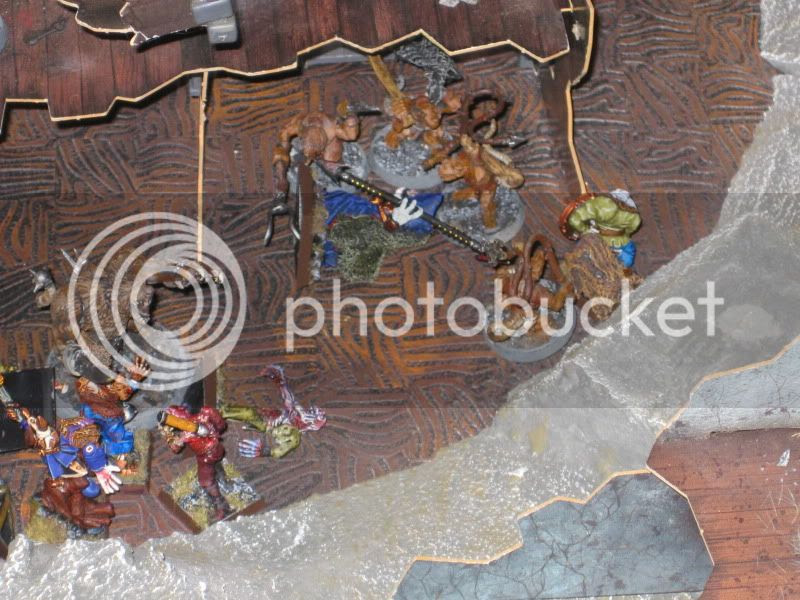 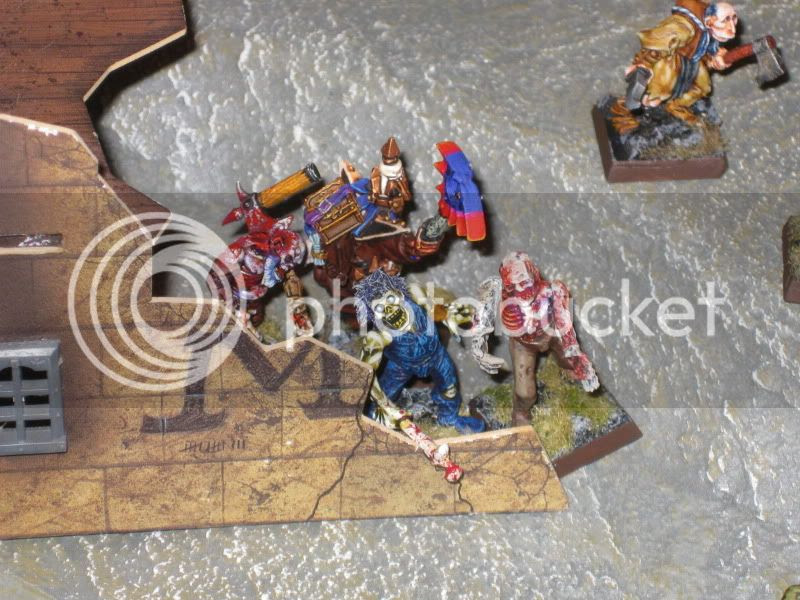 Ichabod: Our Master kept rising up over and over and over, to the horror of the ratmen until he ran one Skaven through! The ratmen despaired to see their warrior writhing in the agony of death! Our Master refused to slake his thirst on such dirty blood! The vicious Rat Ogre continued to fight in the zombie throng, hurling corpses to and fro.

Ichabod: I’m glad you’re bleeding again. The Necromancer pressed the zombies in with whispered words to protect our fallen Master. The goblins were so excited to fight that they literally cartwheeled down the slopes, crashing to the crypt floor, a clatter of weapons and curses!

Ichabod: Then the damned goblins got closer and a wild Skaven jumped three stories down onto a Dire wolves back, stabbing and biting it.

Ozzy: Whoa, that is amazing. You put different pants back on me?

Ichabod: That was about the time I fell down the slope trying to help The Master. Then a crazy-ass Skaven doffed you cold as you looked at shiny stuff on the ground.

Ichabod: No it isn’t. The Rat Ogre drove off the Necromancer and zombies. The dire wolves followed the Master as we slipped into the catacombs. The Ghoul chortled at the both of us and made off with your pants.

Ozzy: And the goblins? The ratmen?

Ichabod: They are still fighting. The Skaven lord still holds the ruins. The Master is not pleased. 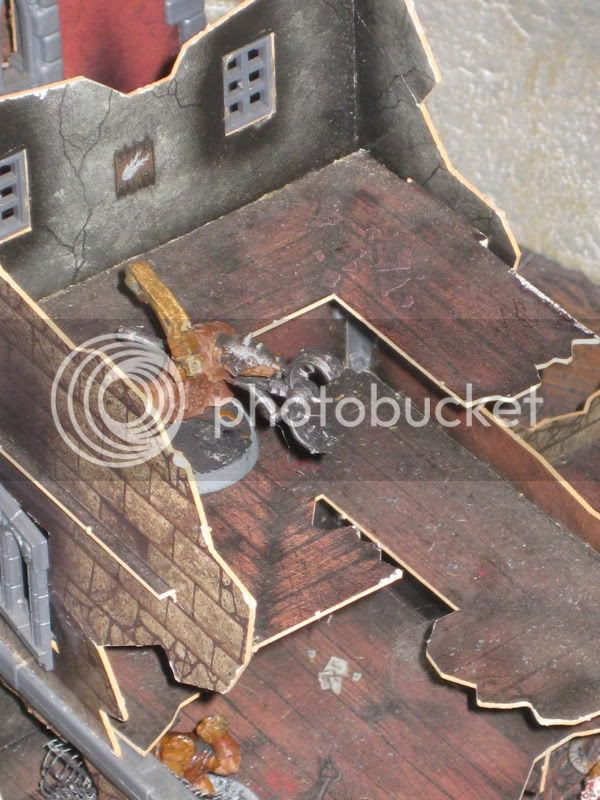 Ozzy: I’m itchy where a sexually active person is.

Ichabod: I hate you.
Undead Summary: 4 zombies destroyed, Ozzy KO'd and robbed of all equipment. The Vampire showed stupid toughness which was good. They found 2 shards of Wyrdstone, one cashed in for a Talisman for the Necromancer. 2 pieces of gold and 1 shard left in the coffin, er, coffer.

Goblin Summary: They fell down a slope, wounded the Rat Ogre and killed a large rat. +1 WS to spear henchmen, +1 BS to archer henchmen, talisman to shaman. Solid second place finish.
Skaven Summary: 1 warrior dead, one large rat lost, one wound on the Rat ogre and a crap ton of advances plus Wyrdstone. Steven elected not to cash in or explore. Overall, the big winner of the night, holding the objective and getting a ton of loot for little loss.
Posted by Yeti's Yell at 9:56 PM No comments: 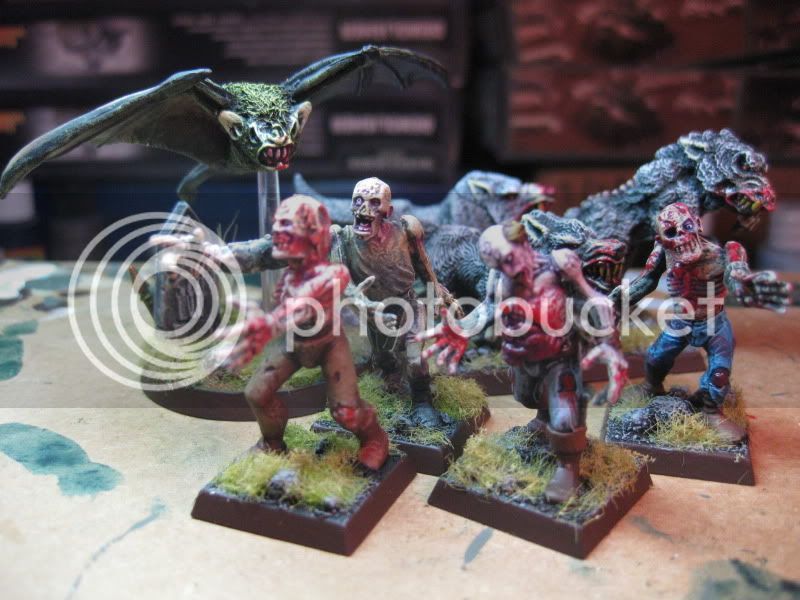 Not sure there are objective markers in the game, but whatever.
Posted by Yeti's Yell at 3:58 PM 3 comments:

Diagnosis: I have Turrets Syndrome 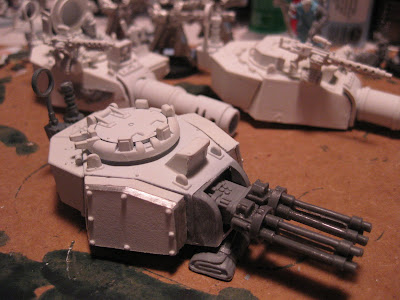 Custom Punisher Turret WIP
With First Platoon done, mega-travel on the wind (for work and personal reasons) and with most of my mixed batches of red paints dried out, I am loathe to do anything I threatened to do over the last few weeks, be that Warmachine painting or Valhallan vehicles.
I just returned from taking the family to Disney for 5 days. At night I had a heart-to-heart with my painted forces, codex and Excel formulas.
Out of that coming together I realized that 3 Leman Russ are good for pretty much what ails my possible Playing of Games™ with Heavy Support at all points levels but that is also a hole in my painted lists becuase I don't have all the turrets I want built or painted.
So, work and school being what they are I’m going to labor on three turrets the next week or so while I recharge my infantry painting battery for both 40k and Warmachine. I have one vanilla BC turret with stubber, and another with open hatch and pop-in Pask plus heavy stubber. For Demolishers I plan on two Forge World Demolisher turrets, the only ones I like.
By now you have noticed that the third turret is indeed a Punisher. Yea, I know. Get your derision out now and let it rain on me, I already put down a tarp. Done? Good. I don’t think the Punisher is a weapon for every game, or many games for that matter. What it is though is an awesome modeling opportunity and a chance to use some bits from my box (no idea where these came from) and maybe kill some Ork, Gaunts or traitor IG during a game at some point.
So yeah, turrets.
Posted by Yeti's Yell at 10:42 AM 1 comment:

Ok, the blog outage is over but updates are sorta wonky still. See last post below to be all caught up, as I fly with my family to Disney World. See ya'll in a few days.

Email ThisBlogThis!Share to TwitterShare to FacebookShare to Pinterest
Labels: The Web-nets ist Kaput

Alright, 1st Platoon is done plus a few extras you probably saw already. Here are the class photos. On to about 15 mortars and another squad... the start of 2nd Platoon. Yeah, yeah, yeah... I know. Get the Vendetta done too.
1st Platoon Pics 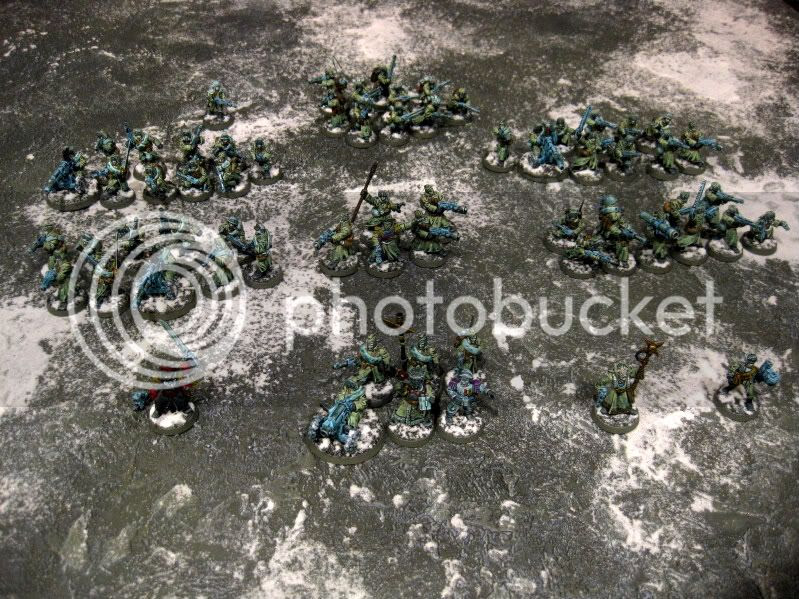 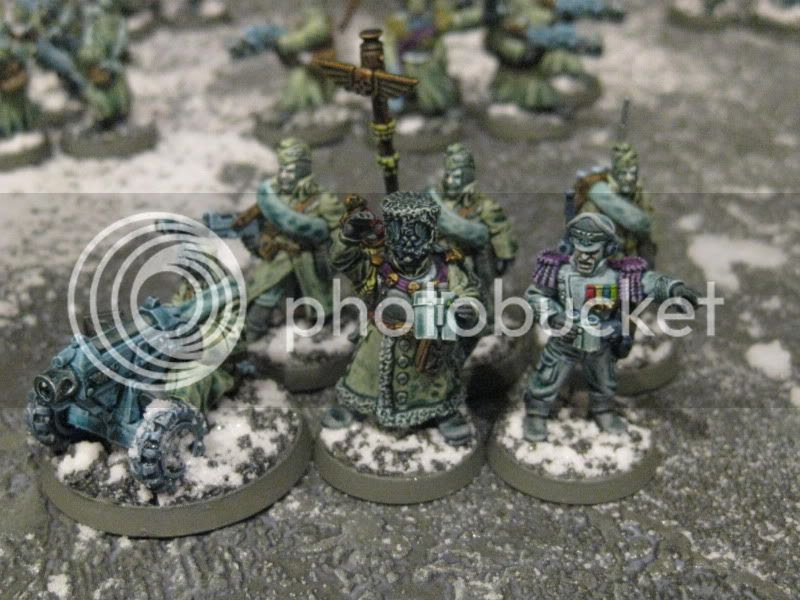 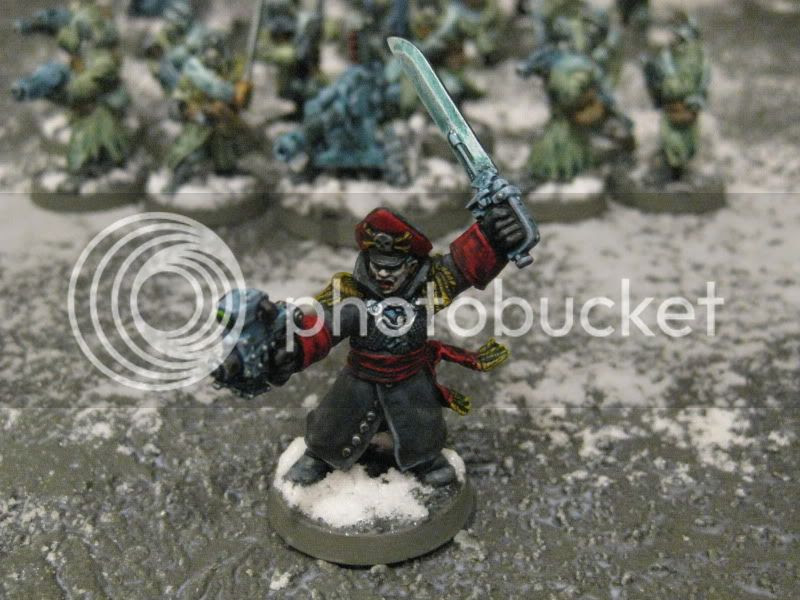 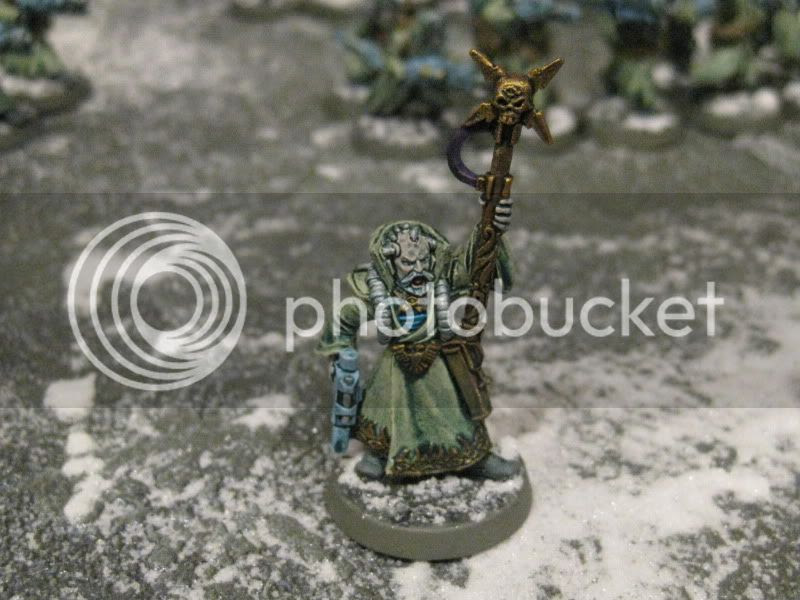 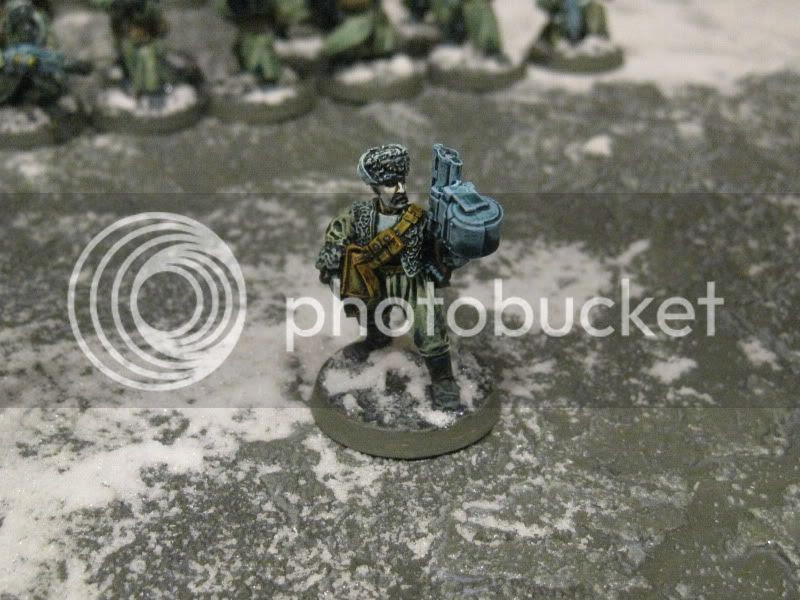 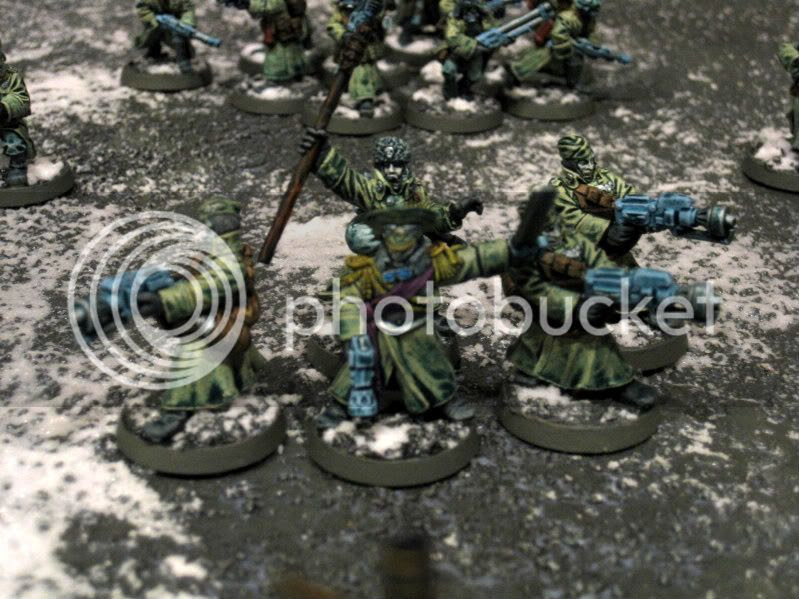 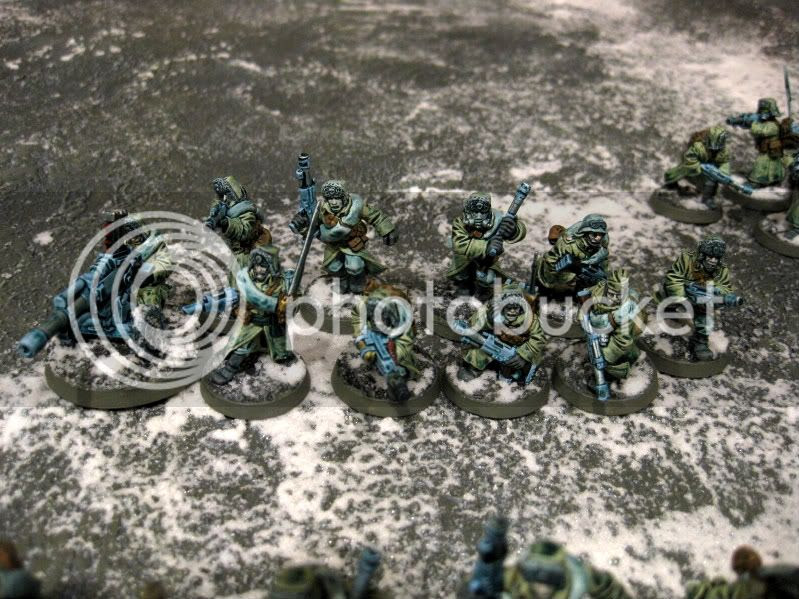 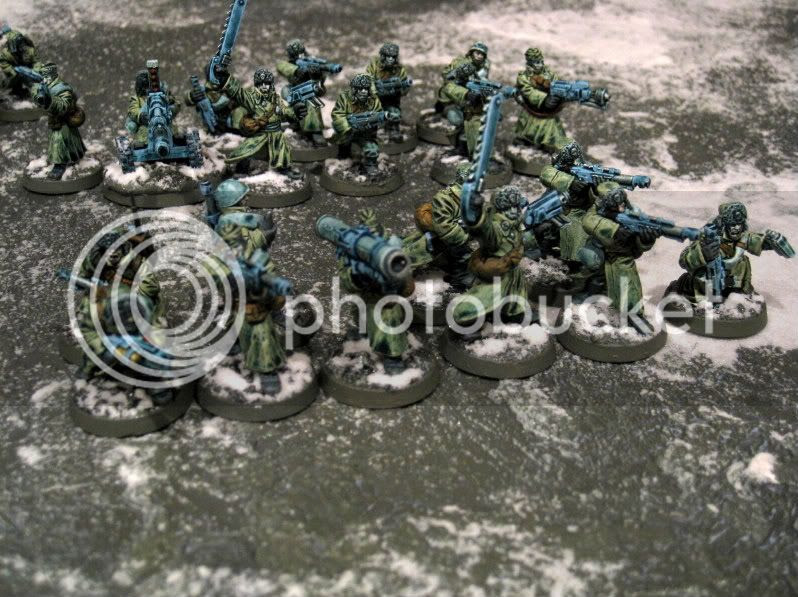 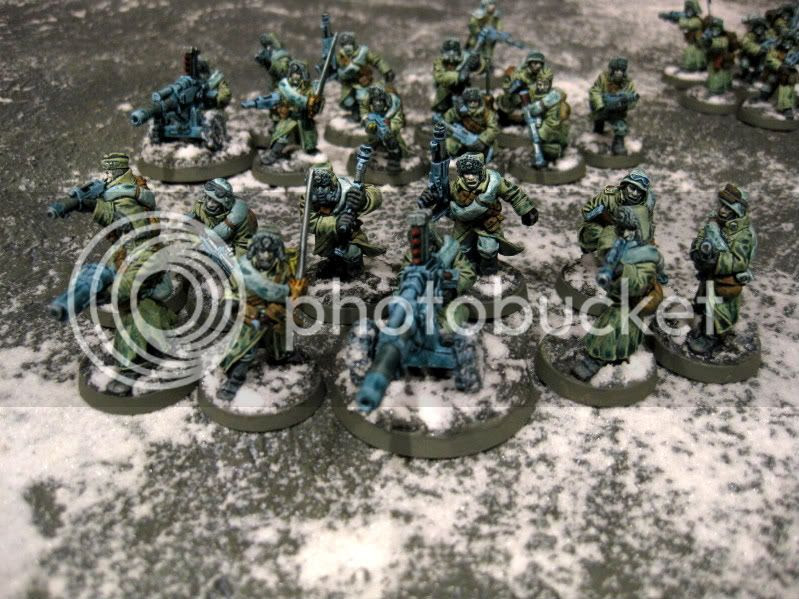 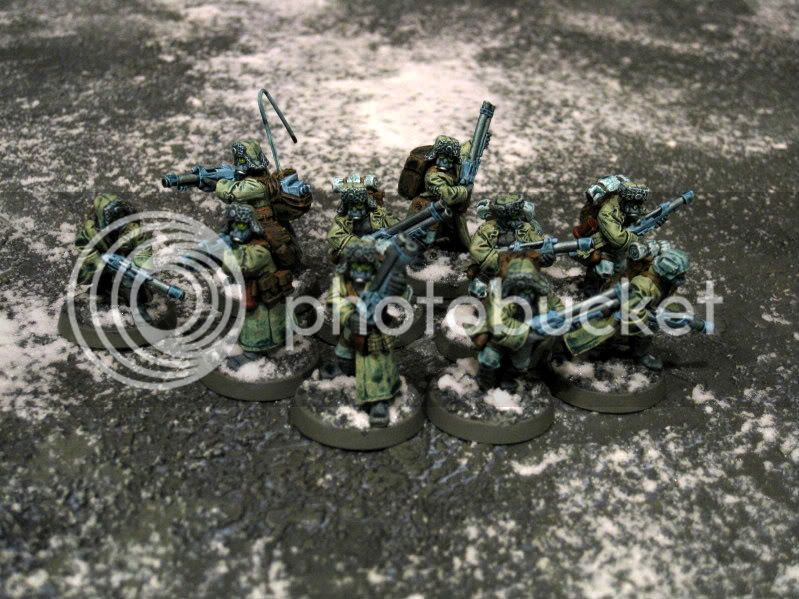