Bushido Best of the Web #2 and Other Game Updates

I got another Bushido Best of the Web for my recent Bushido board, checkout the link. You can see I did the usual elevated legs feature so there is room for cards, books, figs under the board and it generally makes it nicer to sit and look at, even with LOS checking. I had to spend a lot of time with the trim cut outs around the water features and I definitely learned a few ways to do this better next time, when it comes to trim and finishing.

I hang out on the Bushido the Game group on Facebook, if you are looking for an active, fun scene for all things Bushido. Join us! 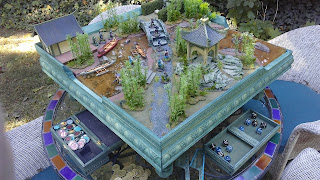 I talked with Odin at GCT about the board, which was really, really cool (thanks Odin!) and I used the voucher I got from him to order some 4Ground hovels for the board, which should be sweet and in shortly. I have been wanting to build a board with "teddy bear fur" for some time, so I can start by playing with the fur roofs 4Ground supplies, meant to look like hay or thatch.


Let's see, what else have I been up to? 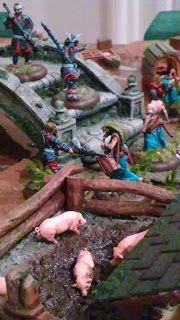 I made a pig sty for Bushido. Why? Why isn't everyone, really? It is a simple piece that adds difficult terrain, breaks LOS and adds theme. Don't know why but the second I got into Bushido I said I am building a sty. My buddy John said I need to make a drunk villager in there with the pigs. I think I will. 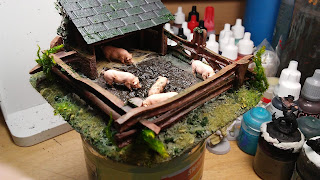 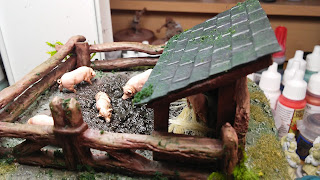 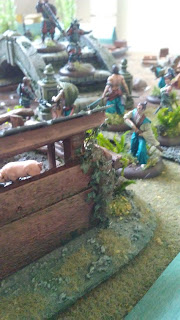 40K: Been played 8th and really loving it, but like a lot of things, not playing it enough. Trying to cast up some custom Chimera turrets and build out two non-heavy weapon squads for some lower point/high-agility objective takers. Oh! Both are armed with Plasma Rifles, having been sent to me as a gift by my buddy Major Downer over at the Imperial Guard Message Boards. If you play Guard in 40k, go check out that community. Thanks for the figs, Major!!! 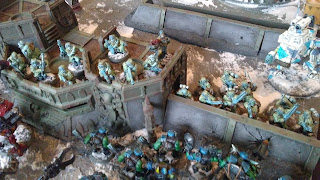 40K Defense Line: I bought the Imperial Redoubt to go with this old set of Forge World defense line I have had forever. Not really into finishing this all at once but I am chipping away at it. So much Nuln Oil... 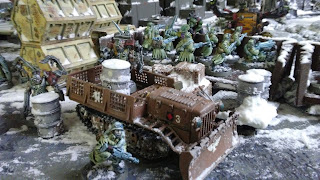 Valhallan artillery tractor: This is a Dust model lightly modded to be a light errand lorry. Again, this is a theme piece and looks good with the Valhallans, especially equipped with a handy snow plow for managing the airfields of Hammerfall V. 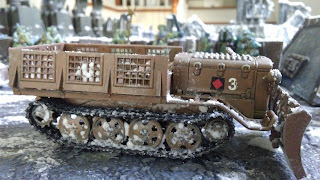 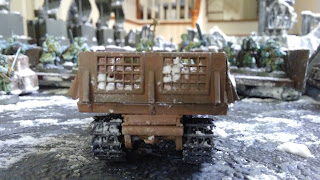 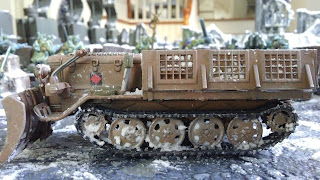 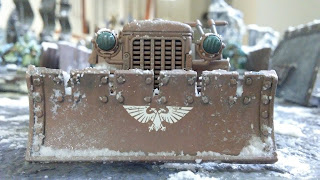 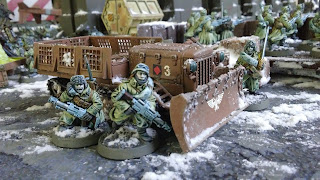 Scatter stowage/containers: My buddy Joe at Rocketship games offers 3D printed terrain and this set is particularly awesome for 40k, so I did up a set. Joe has a Kickstarter running called Kolony, you should check out. It features great printable terrain suitable for 40K and Infinity. I backed it, so should you! 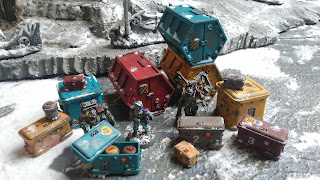 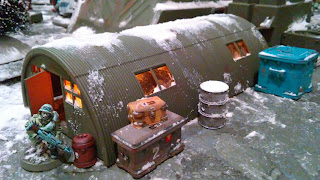 Valhallan Barracks: I added in some DUST quansets as barracks to boot, easy adds and really dress the board well. Note that I used super glue to add acetate windows, simply letting the fumes of the glue "frost" the windows. I love efficiency. You could also spray the acetate with Dullcote but this was faster and more fun just to see the random frost patterns set up.

I also snagged a Banebalde kit for US$75 which I should probably build soon. The club usually has an Apocalypse game in January. I guess I should order a second set of sponsons? Gotta get the new Codex to see what load outs there are. 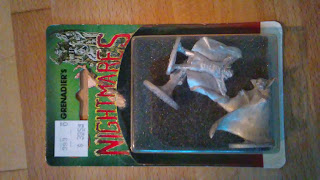 Strange Aeons: Picked up some classic Ral Partha Vampires! I remember lusting after these at the Willow Grove Mall in Pennsylvania in the 90's. glad I finally got my hands on them for Strange Aeons games, not that anybody has a Threshold team strong enough to cope with the Nightstalkers. 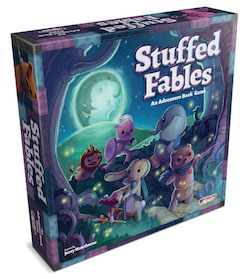 Stuffed Fables: I am dying to get this game and paint up that stuff. So, hopefully soon. PDF of rules are free online already! Check it out at Plaid Hat Studios

Imperial Assault: With Legion looming in the distance it is easy to forget I have a lot of IA to paint and play with. At a family function I got into a conversation about Legion killing IA; I don't think it is going to happen, if anything, Legion may drawn in players that don't end up caring much for the scope and hobby demands of Legion games and maybe they go IA, and enjoying that much more. We'll see. I will likely want to start the IA queue for this after I see Last Jedi (got my tix already!) 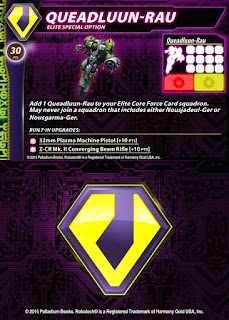 Robotech: I haven't done much here but pulled out the last of the Regults I need to do to get the base missions going. Looking forward to playing this and painting up some Zentradi female power armor too. I have had this game too damn long to not have played it. Sigh.

Hope ya'll are productive and having fun!