I filled up my modem with interweb fluids to the top and I am moving onto Instagram:

Find me there for WIP pics on stuff I have going on.


This past weekend I had probably a too-huge game of 8th edition 40k with my buddy Jason at Headwound minis. He brought his immaculately converted and painted Nurgle forces upon which I would cut my teeth (ew,) as they properly ransacked my Imperial air base in a bold dawn-to-dusk raid. 1500 points and several hours later I was feeling pretty damn satisfied that my Valhallans were properly bloodied and performed to themes very well. Better, I felt like I had the hang of a game new enough to me that I bother to say it with feeling.

I will post up a batrep shortly (still sorting out the Photobucket debacle) but wanted to share some thoughts on how this game went, given I have been staring at 40K in recent years through the store window, despite owning a bunch of stuff and having played it previously for a very long time. Others have done a way better job at pro/con'ing this edition, like my pal Joe, so I leave it to them for the long form. On the below, my view comes mostly as a Guard player wading into the new rules.

Story: The game was full of dramatic story-inducing moments that came from play outcomes. YES. I think that correlates to the Indexes and how they are all unique in appreciable ways and also, the simplified ruleset. Universal Special Rules of last edition are gone, and while I get that their algebra helped organize features and functions of units well across lots of different play, like competitive to casual, especially through a TO's eyes, it seemed dull and bookish to me. I play great games like Bushido, Imperial Assault, Strange Aeons, Robotech... these games have story in their play and feel unique as you navigate through your game and it helps if they not so cumbersome. I didn't feel that in previous 40k editions, it felt like an Advanced Philosophy class trip, lost and plodding through an endless swamp and debating the whole time about Jungian Star Wars themes. The current indexes and rules have what seem like a lot of fun options that breathe some anima into the people, place and things involved. Isn't that the point? Reading Dan Abnett to replay those conflicts?  Give me the damn story and you can keep your the tourney complexity. More on the Index in a sec.

Army Building: Still cumbersome compared to other games. Was sorta hoping GW gets stats and costs on one page. Still perplexed why there is Battle Forged play and other mode, it isn't like they give you distinct Campaign and Skirmish modes like FFG's Imperial Assault, but a sit-down over a cup of tea gets it done. Costs were reportedly up this edition but my old 1500 point force came in about the same. What I noticed most coming back to the game was the wargear options are all gone from the index, so while I couldn't spend a last few points on Carapace armor or Master Crafted weapons, I was inherently avoiding the pitfall of previous editions: wargear splurges. All that aside as a positive, it did force me to drop heavy weapon options in squads if I wanted to squeeze in another Sentinal or what have you. Tough choices as usual but easier to get to the table and the Index has enough ability that comes with the basic costs, including commonly used squad-level gear like vox, standards, med kits, etc. 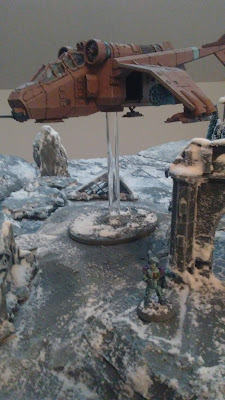 Index Staying Power: Remains to be seen but the counter-culture habits I live by are alive and singing Glee's cover of Born to Run when I consider that I could happily play out of the free ruleset along with Index Imperium 2 and Xenos Index 2, maybe forever. One of my best friends Pete at Not Snakes Gaming noted that 40k is no longer competitive and as I agree with that I also give thanks for it. I want games that feel right to characters and situation. As far as Astra Militarum, Chaos and Orks go, Indexes feel right to the character of the forces, situations and games I want. Codex releases may change things like complexity and dissonance with who you think your army is, but I am content playing these Indexes instead of a Codex, if I prefer one over the other in the end. Finally, a good value from GW with each book around US$25 and including what equals several codex to boot.

Terrain: Just weird, these terrain rules. The game now boils down to LOS and if you simply have it or not. Cover saves don't seem to be factoring unless you are talking Characters by themselves and I think that does speed up the game a bit. So terrain effects are dead? Yes! Wait, unless you use Fortification rules in Imperial Index 1, then it seems like a U turn in the face of easy. I love building terrain more than any other part of this hobby. I am a bit perturbed since I took pride in building terrain that reflects play. A few weeks ago Joe mentioned all of this terrain rule jazz to me and I joked it sounds like Privateer game's norm of flat mousepad terrain. Seeing GW releasing what equates to the same thing in their boxed forces makes sense now, given how terrain rules read. So be it. Building LOS blocking terrain can be fun too.

LOS: Sorta weird. Facing and fire arcs are gone (unless you are a Valkyrie pivoting to go Supersonic for some reason) and said Valkyrie was clipped by a Nurgle Vindicator who fired backwards at me without pivoting. Did not see that coming. Also, getting LOS on a pile of Plaguebearers by the Leman Russ tread  was weird as well. Just gotta get used to that.

Shooting Phase: Easier. Sorry, I guess seasoned players may balk and say what difference is there really but I will tell you it is way easier for me to learn and also to teach to my son, so that means something. Statlines are verbatim now, good when you have to keep your short term memory filled with other bits of episodic and particular rules, etc.

Melee Phase: Finally a melee phase where I feel like I have some game in the options, even if it means choosing the order my Valhallans are slaughtered, since after all, their job is to die to slow things down, not win hand-to-hand. Players alternate choosing which side of their side of melee fights is cool. Having a say means I have some initiative in how things die on both sides. I like that, especially as a guard player.

Morale Phase: Again, good. I was never a fan of all the modifiers some games pile on, especially over large forces and games. This seems fair and leaves me options to get more shooting in after falling back. Good.

Game Speed: Lots of debate on this point. I believe my experienced brethren when they say the 8th changes do not really speed things up but I do think the play is cleaner and not as prone to operational mistakes that can change the outcomes. THAT is something I like a lot and something I attribute with speed. A short game filled with re-sets and backtracking from complicated play feels slow to me.

So overall, not bad at all. I give it an A-/B+ for how the state of the game stands and what seems like GW listening to at least some of the customer base on what they want. Looking forward to getting some more GW to the paint bench and more 40k in the books (be that Index or Codex.)