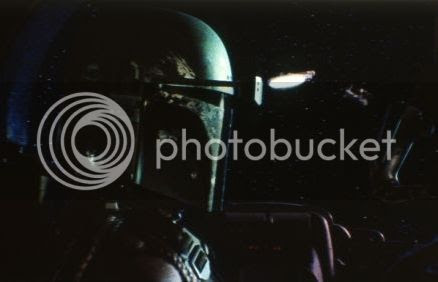 Ah, Spring Break. I played an awesome 100 point Empire vs Rebels game last night with Pete, who took the Millennium Falcon with Chewbacca plus concussion missiles, a bare Red Squadron Pilot and Rookie Pilot. I took Boba Fett (w/Swarm Tactics) in Slave 1 with Heavy Laser Cannon, Proximity Mine and 4 Acadamy Pilots in TIE fighters. The play space was around 4'X4'. This was my first game with "The Big Ships" of SWXW, so I had to be Fett.

I will describe the match from the Empire perspective mostly, because I was so busy wrangling all those TIE's around the board.

Turn 1-2: Boba Fett lined up with two TIES on both sides, ordering the starboard pair straight ahead to start describing one pincer line. The port TIES flew forward, one staying abreast of Slave 1 and another cutting into its wake, to rearguard. Chewie moved the Falcon forward, shields up, as the X Wings locked X Foils into attack positions. 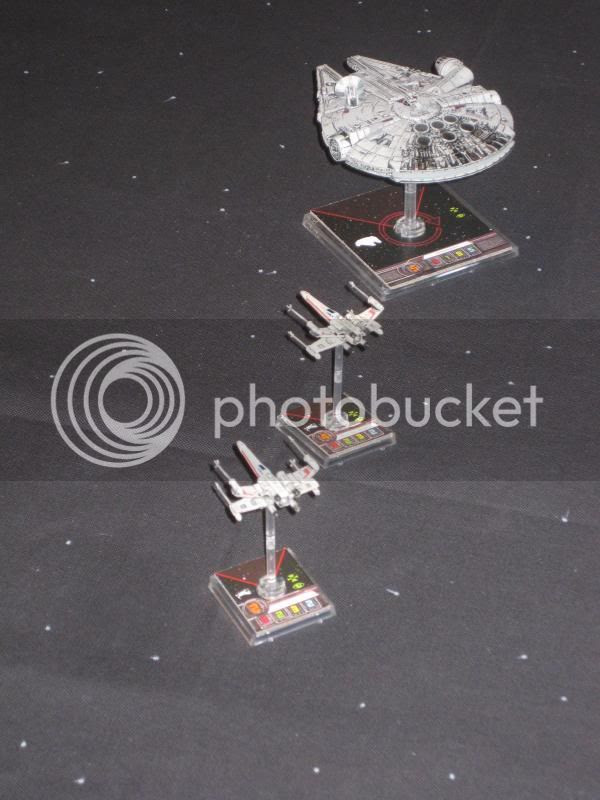 Turn 3-4: Both fighter groups tore into the middle of the board, engines blazing, on converging vectors. The Falcon cruised the left side of the board as her escorts engaged ahead, while Slave 1 went straight into the furball. 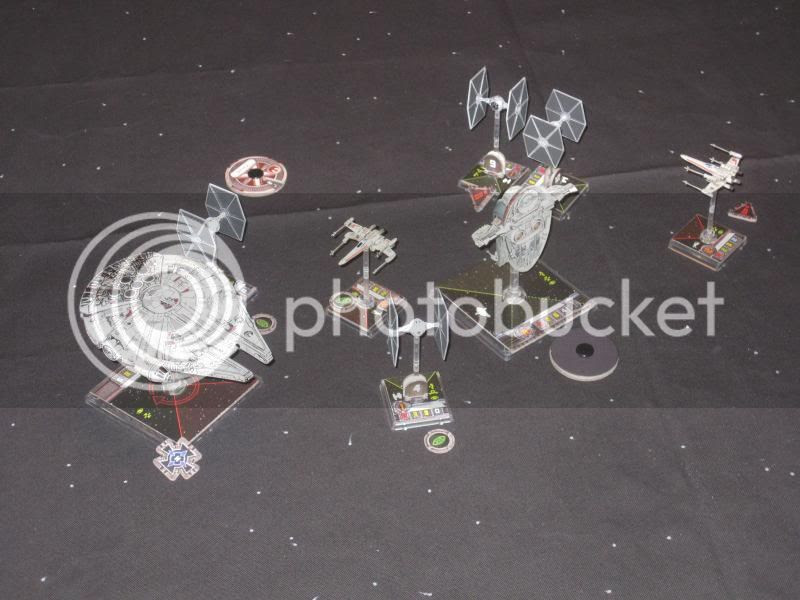 Ship-to-ship warfare was on in earnest with plenty of hits, crits and evades going around. 2 TIE's were damaged and one TIE pilot was Blinded. The X Wings lost some shields. Slave 1 passed the Falcon to port, then leaned into a tight turn to get behind her. The Falcon's Quad Guns blazed the whole time and tracked ships via Target Lock but Fett drew first blood as he caught a passing X Wing right in the astromech, for an incandescent kill.

Turn 5-6: Somehow, the Red Squadron pilot took a vector too steep from the turning dogfight and ended up probably double the distance from the fight than he intended, since the TIE's and Slave could cut hard. The Falcon was now alone.

The Falcon, now with 4 TIE's intercepting and knocking down her shields for hull damage, also had Slave 1 on her tail, blasting it with the Heavy Laser Cannon. At this point, I tried to keep the TIEs right on Chewie at all cost. At least one TIE rode out a stress token every turn until the end, dancing hard to keep shots on Falcon's armor plating. The Falcon's quads, with Target Lock humming a steady tone, defensively sprayed the TIE's with shots, for hull damage and then another kill.

Turn 7-8: Now Fett was being careful, the Wookie had escaped too many times before. Slave 1 stayed right behind the Falcon and noticed the crowded call-signs of the TIEs on the HUD... they were very close to the edge of the board so it would be sticky here with limited turning space and they could risk gliding off the board if they fly casual.

Suddenly, the Falcon pulls a Kiogran turn! Chewie powers up and over the TIE pack and is now coming nose-to-nose with Fett, the Falcon's chittering alarm complaining about laser impacts, collisions and a now-disconnected Hyperdrive. A hatch slams open on the Slave 1 and a Proximity mine tumbles out behind her, as the Heavy Laser Cannons open up once again.


Final Turn: The closing X Wing could only watch helplessly as the Falcon roared past the firing Slave 1. As they crossed and the Slave banked, her primary weapons swiveled from firing forward to backwards as Chewbacca passed, removing the final hull points with 2 hits. Critically wounded and powerless, the Falcon is crippled as Fett prepares to board. Chewbacca grabs his bowcaster and readies to defend his ship as the airlock blasts open...


Empire Wins! I don't think I've had that much fun with a miniature game in some time. We played late, so we had no blaring soundtracks and our yelps were hushed for those sleeping in the house but I swear I was 10 again, playing with Kenner figures at a sleepover.  Just awesome. Final tally: 2 TIEs vaporized, 1 X Wing destroyed. Falcon down (but NEVER out). Red Squadron pilot shields disabled (I think, not sure). Slave 1 100%. Just under 2 hours of play.


Bumping: Yeah, lots of TIE's lost their actions due to bumping other ships... coordinating the flight paths was a fun challenge and I got it more wrong than right... but that wasn't debilitating. They still got their shots and as importantly, threatened to get shots onto the limping Falcon. Losing actions did factor though, as not having an Evade or Focus on meant that the straight dice roll can kill you, which it did for one defending TIE. 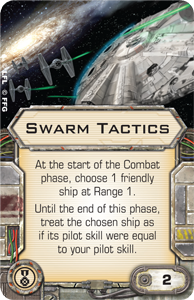 Swarm Tactics: Trying to keep a friendly TIE within Range 1 for Swarm Tactics proved to be really tricky.  Range 1 is really close space for a TIE, Slave 1 and any possible target to occupy at once... my guess is Swarm Tactics may work better for elite TIE pilots, who can better capitalize on the space the fighting affords (and small bases) or simply as opportunity arises, which wasn't much. It is good to watch out for but shouldn't dominate your tactics when you have a ship that really fills up Range 1 on its own. 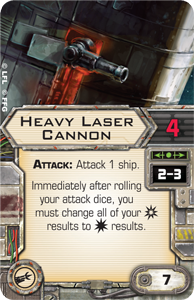 Heavy Laser Cannon: I debated on taking the heavy weapon, since it was 7 points. I didn't realize it at the time but it was going to be worth it. The Heavy Laser Cannon, which only shoots at Range 2-3, has you throwing 4 red dice, though all Crits turn to regular hits. Any targets at range 1 though, you still have your primary weapon, which at Range one, adds an extra red die on attacks (4 total) and you keep your Crits. You could also throw 3 dice at Range 2 with your primary and keep your Crits or 3 dice at Range 3 keeping Crits too (but the defender gets extra green die). So, the 7 points just makes sure you roll 4 red dice at all 3 Ranges with Crits as a variable. My point is, however you cut it, what you give up in Crits you probably make back in raw stripping power. 4 dice is really powerful, Crits or no, especially against high Shield/Hull counts like the Falcon and Y Wing. 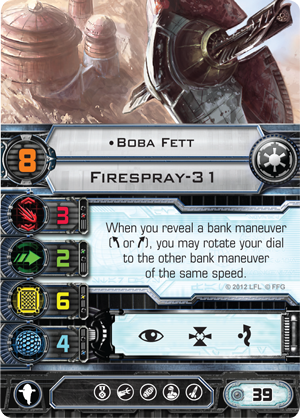 Fett's Ability in Slave 1: Fett can order banking turns to one direction and after revealing it on the dial, change it to the same banking turn in the opposite direction, if he wants. While it didn't come in handy every turn, it did allow him to squeeze through the dogfight and stay open for his Action at least once. If that works once a game you'll be grateful you have that.
Posted by Yeti's Yell at 5:15 PM 2 comments: 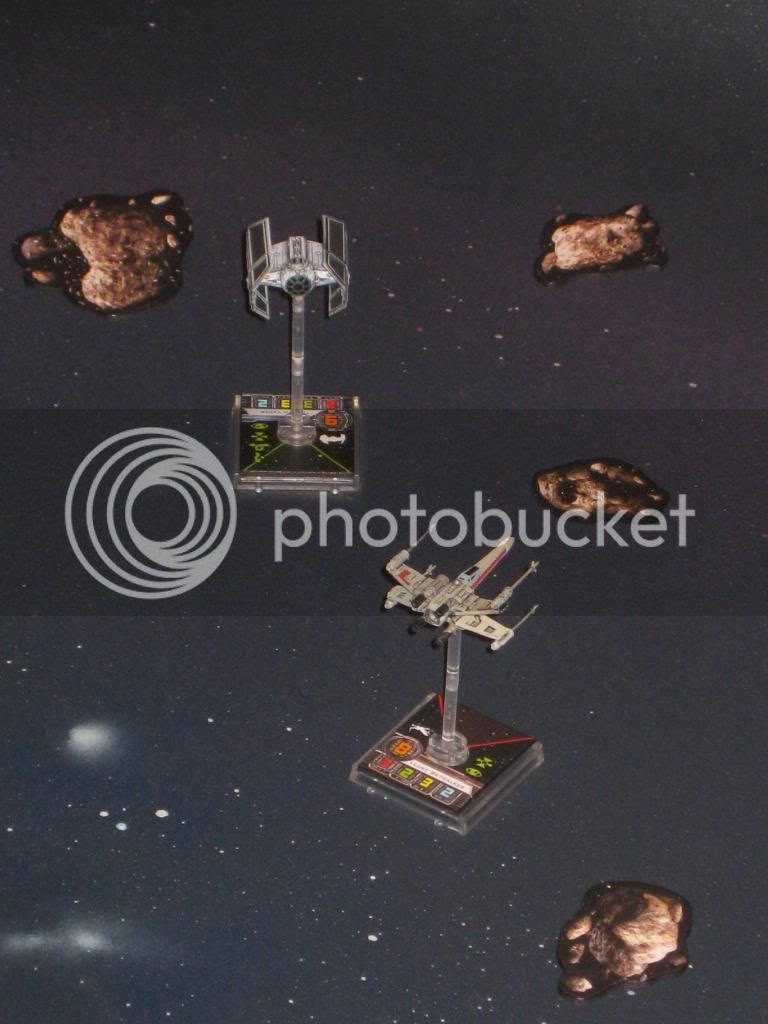 http://boardgamegeek.com/thread/938057/collection-of-user-created-material-for-x-wing-min
Posted by Yeti's Yell at 3:59 PM No comments: