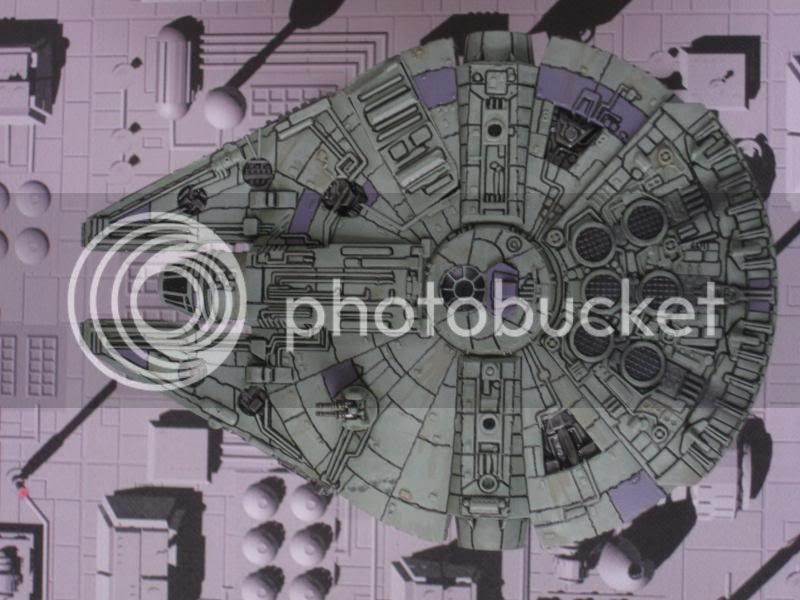 Merry Christmas and Happy New Year to you all! I hope everybody who celebrates has been having a great time with family and friends over the holiday season. And to those who don't celebrate, I wish the same for you regardless.

Just wanted to share a YT transport conversion I did for my buddy Pete. He wanted to run a double YT list for some time and the thought of identical Falcons on the board was too much to bear.

There are many conversions out there like this that precedes mine and mine isn't amazingly different from them though I did re-use the off-cuts (out of laziness) to seal up the hull after I took off the cabin and gantry. I didn't see anybody else do that yet so that may be a way it is different.

The surprise in this project came from the build, which was more challenging, where I expected it to be the painting, which was easily straightforward and fast. 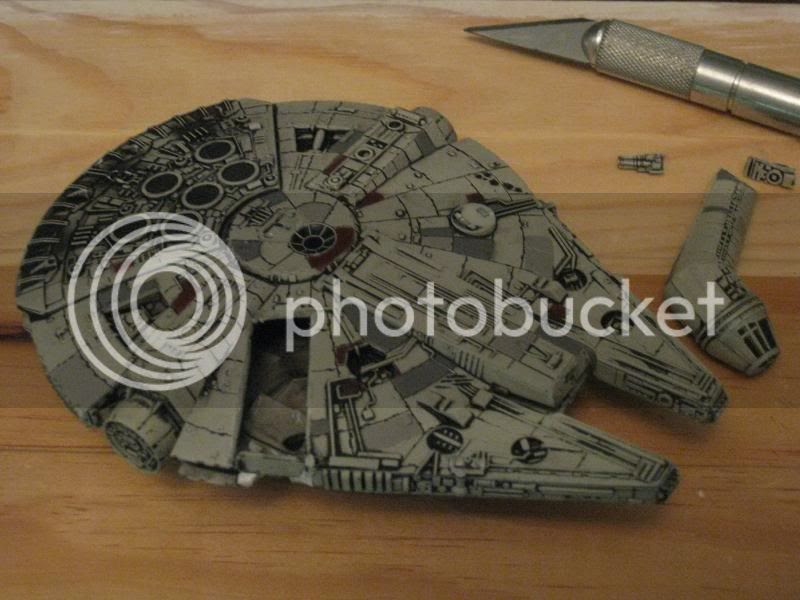 The assembly went down something like this: Remove the radar dish and top quad cannons, set them aside. Score the cabin section enough to push a blade in and carve it out with strong, straight cuts. I was going to try a Dremel cutting wheel but realized the plastic would just melt. Cut the cabin from the gantry. I was able to use a foam cutter for this step, just do it outside and upwind as you are burning plastic. 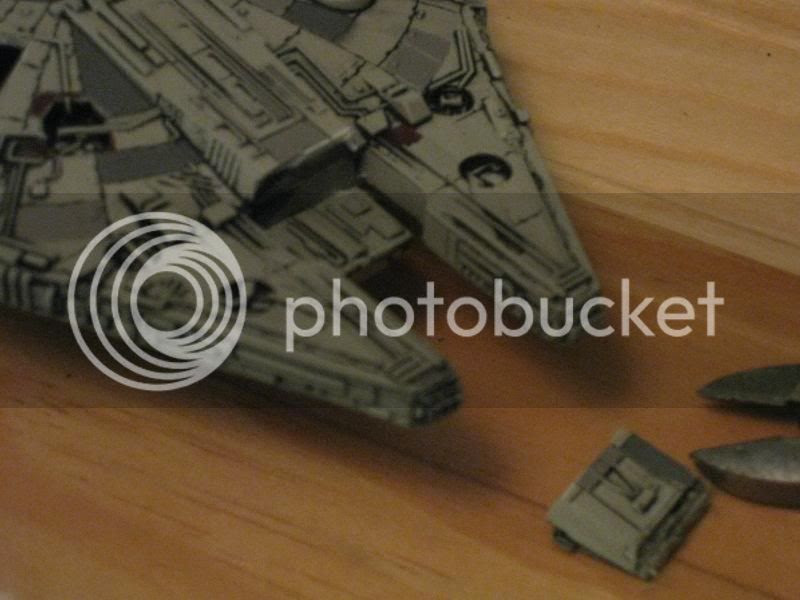 Remove the inner "mandibles" on the front of the YT. Save the bits, you'll use them to cover the hole in the hull. 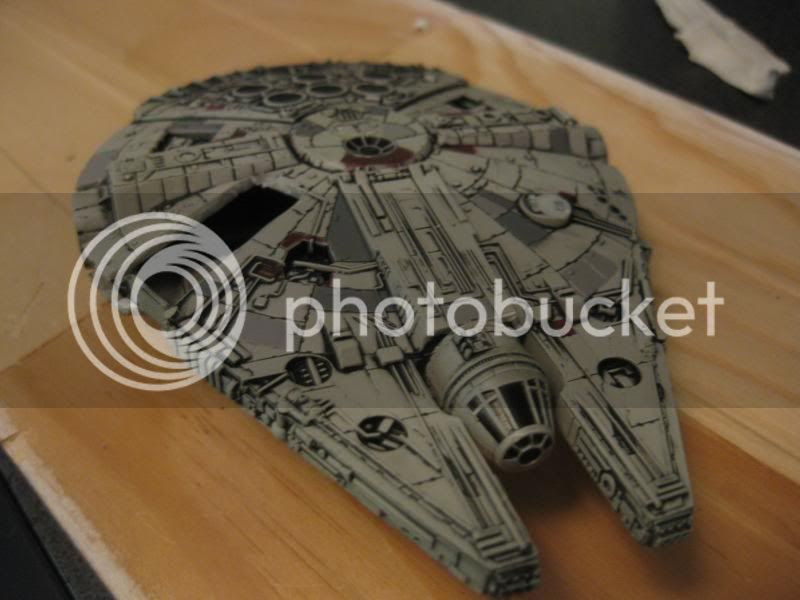 Attach the trimmed cabin between the main "mandibles" of the YT, as above. 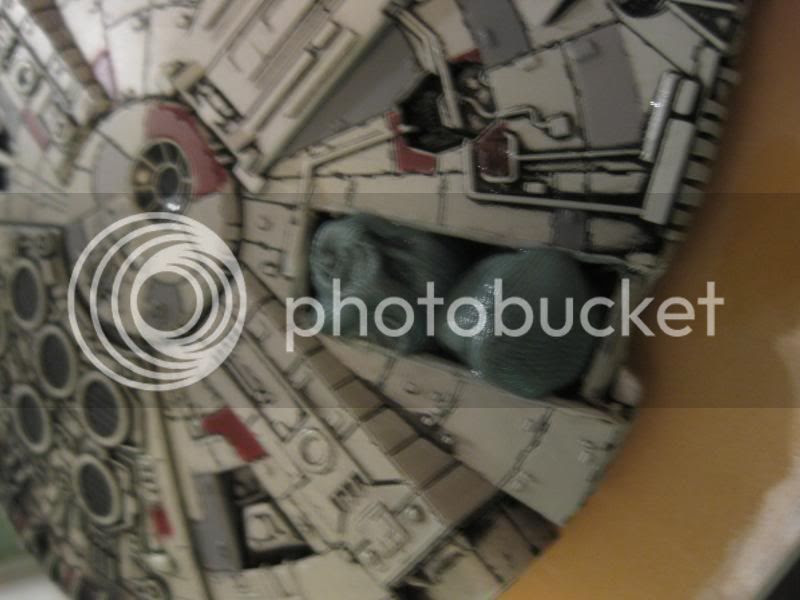 Trim up those off-cuts from the mandibles to fit the hole in the hull. Cross-score the undersides and press-fit them almost flush into the blobs of greenstuff you put in the hull. Let it set up for a few minutes until it firms more and then press flush. Make your adjustments as it cures. After curing, gap fill. I used latex caulk. 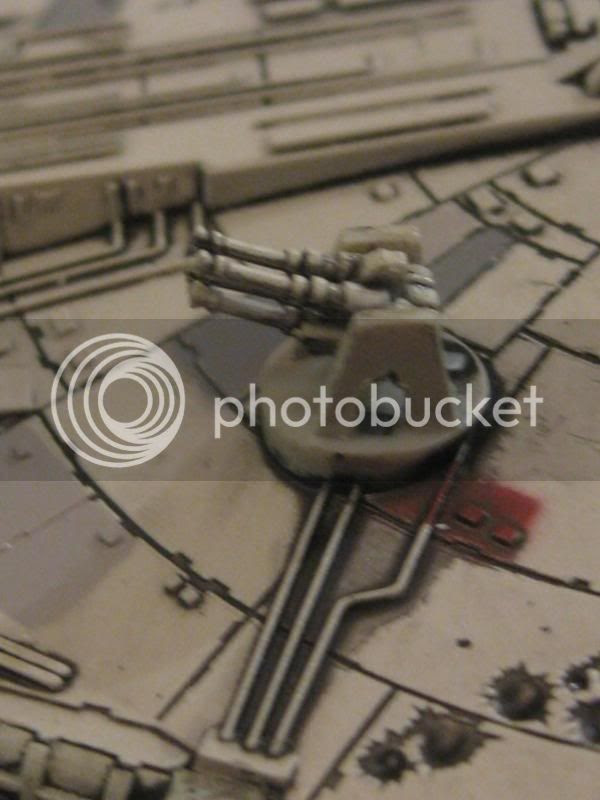 Trim the quad cannons to fit the dish brackets you removed. Make kewl laser noises while you do so. Probably best to glue the gun in the cradle first then after that is dry, glue the cradle to the hull.


I used green Army Painter primer on this and finished with a Sage Green, greys, a Tamiya smoke wash on some parts and GW purple. I added some ocher weathering using paint and flow enhancer. The exhaust is GW grey drybrushed on. I then outlined every damn detail on the ship with a Rapidograph pen, .005 nib with black ink. All told, about 10 hours work and it came out pretty dern cool, I think. Now I want to make one for myself... 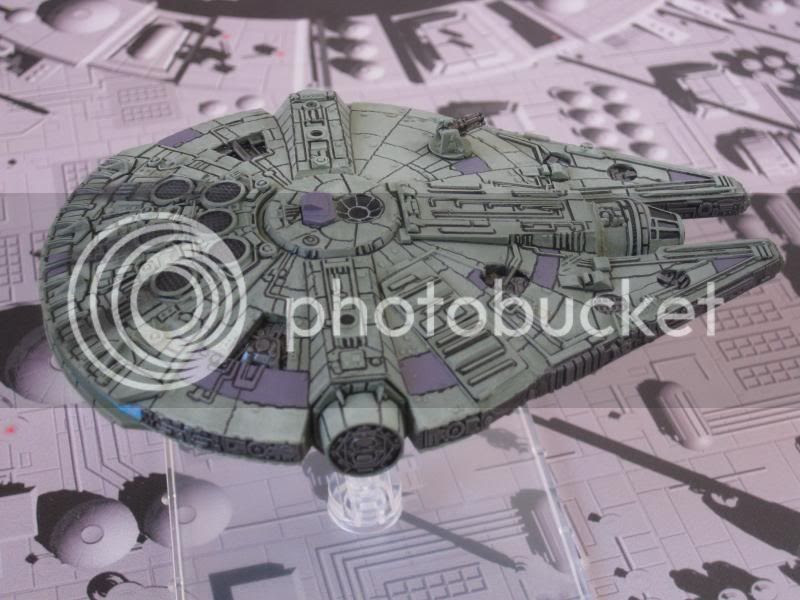 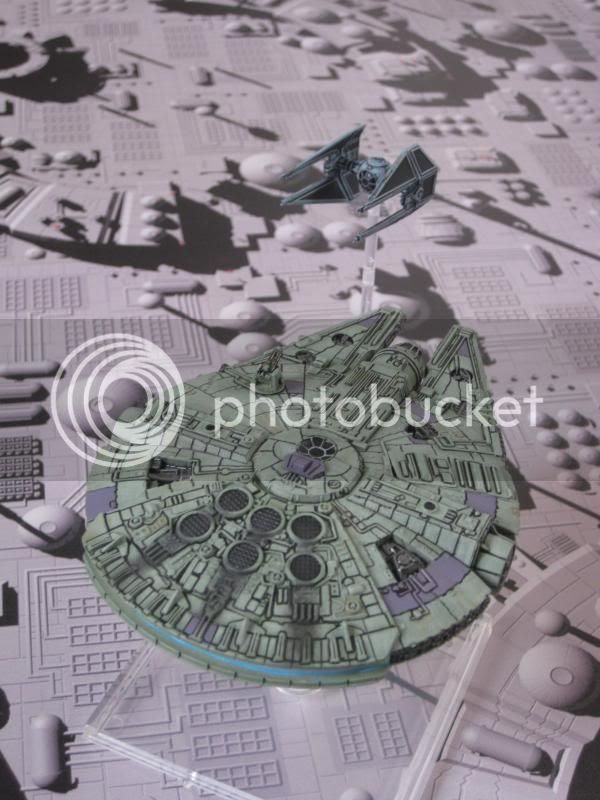 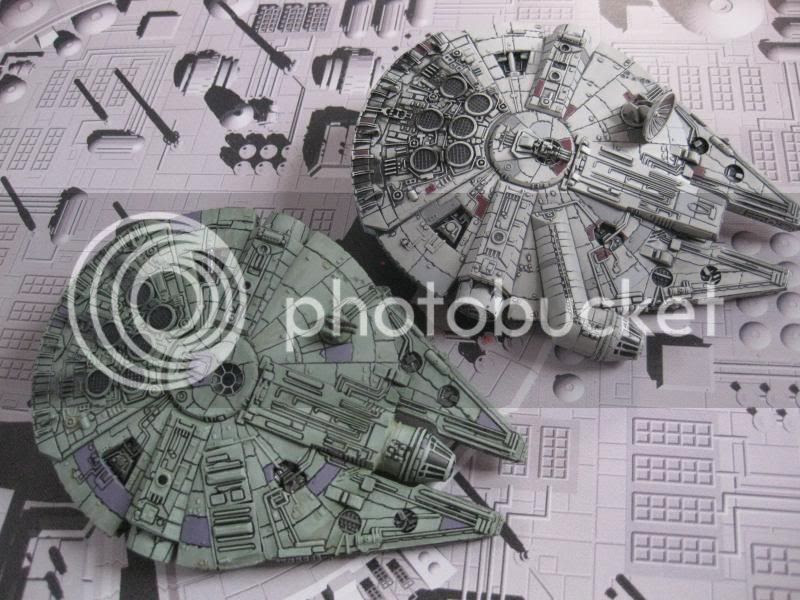 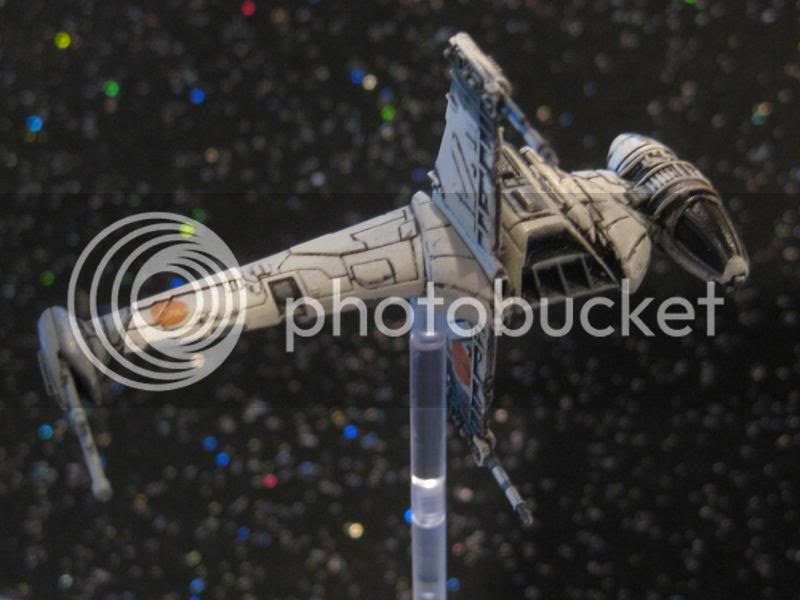 My buddy Finn and I got in a 100 point game this afternoon, me rolling a Ten Numb and Dagger Squadron list vs his Darth Vader and three TIE pilots list (army lists are below, following pics). In the end the TIE swarm prevailed. Though the Dagger Squadron pilot almost vaporized Vader with a brace of Advanced Proton Torps early game, the TIE's simply out flew the B Wings and chipped away with their Primary weapons; the Rebels just didn't have enough in their gun sights often enough to make a difference. Ten Numb died with a full magazine of Advanced Proton torps, having only shot a few times with his primary weapons to garner the lock-on with the Fire Control system. The Dagger pilot hit with his Heavy Laser Cannon too, but not hard enough. For all of the flying I did, I couldn't line up shots on the nimble TIE's. Even with Finn forgetting actions and abilities, just basic shots on target took down shields and inflicted crits. I should have remembered to pull a few 2 Kiogran turns since the Fire Control systems kept the lock-ons running as my targets blew past me. Next time! My camera flatlined towards the end so I only caught part of the action but you'll get the idea... 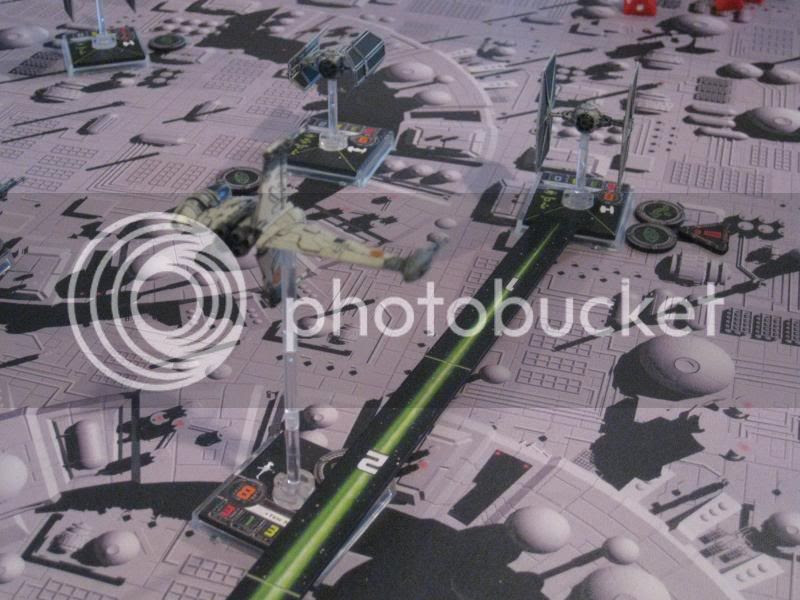 Next turn, Ten bites it as two TIE's blaze into his ship, riding hard inside, inflicting a critical hull (counts as 2) and a weapon malfunction, enough for the scratch. After that I conceded, Dagger pilot only had a few hull left and not one damned TIE was splashed. So, good learning and practice for me and good win for Finn.

Unique
When attacking, 1 of your

results cannot be cancelled by defense dice.
Ten Numb/B-Wing (31)
Fire-Control System (2)
– After you perform an attack, you may acquire a target lock on the defender.
Autoblaster (5)
– Attack: Attack 1 ship. Your

results cannot be cancelled by defense dice. The defender may cancel

results. Attack value: 3. Range 1.
Advanced Proton Torpedoes (6)
– Attack [Target Lock]: Spend your target lock and discard this card to attack. You may change up to 3 of your blank results to

results. Attack value: 5. Range: 1.
Advanced Proton Torpedoes (6)
– Attack [Target Lock]: Spend your target lock and discard this card to attack. You may change up to 3 of your blank results to

results. Attack value: 5. Range: 1.
Marksmanship (3)
– Action: When attacking this round, you may change one of your

result and all your other

Dagger Squadron Pilot/B-Wing (24)
Fire-Control System (2)
– After you perform an attack, you may acquire a target lock on the defender.
Heavy Laser Cannon (7)
– Attack: Attack 1 ship. Immediately after rolling your attack dice, you must change all your

results. Attack value: 4. Range: 2-3.
Advanced Proton Torpedoes (6)
– Attack [Target Lock]: Spend your target lock and discard this card to attack. You may change up to 3 of your blank results to