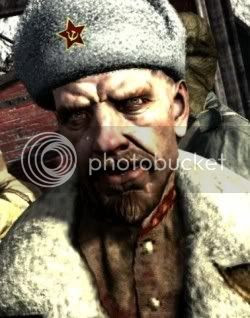 Those that play Memoir ’44 are familiar with 2 things already about the Eastern Front expansion featured in this write up: Eastern Front is probably the best army expansion to date and many people have already reviewed how the army works (so I’ll avoid a run down, better supplied by better reviews like this one: http://www.rpg.net/reviews/archive/11/11710.phtml

Instead, I’ll just share my impressions of how it went for me as a desperate Russian force in a holding action, trying to stem the tide of advancing 1st Panzer Division looking to break out from their faltered offensive against Moscow in early December, 1941 (aka, the first time I played with these new rules.)

My cousin Patrick played the Germans in this scenario. Pre-game I presented him with some brass actually fired from an M1 Garand. I thought he’d take it easy on me because of that, but no such luck. 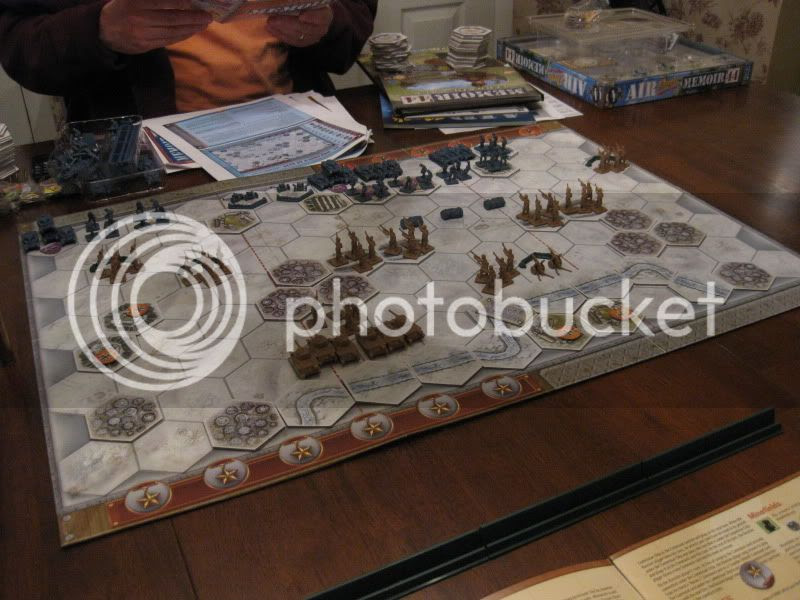 Set Up: The interwebs seem to peg this scenario as an average 80% chance to win for the Germans. I agreed with that before I even played the scenario. See the mission here, page 12: http://cdn0.daysofwonder.com/memoir44/en/img/mm_eastern_en.pdf

The Eastern Front has an interesting mechanic meant to demonstrate the political influence on Rooskie forces in the field. For those versed in Memoir, you are used to the cards in your hand simply being played turn-to-turn. Not so with the Russians. Basically Russians have to decide which card to play one turn ahead, putting the selected card under a “Commissar” chip next to your hand, signifying the infinite wisdom and stubborn inflexibility of a paranoid, dysfunctional Russian military machine (read: inflexible and slow to adapt but win by attrition.) 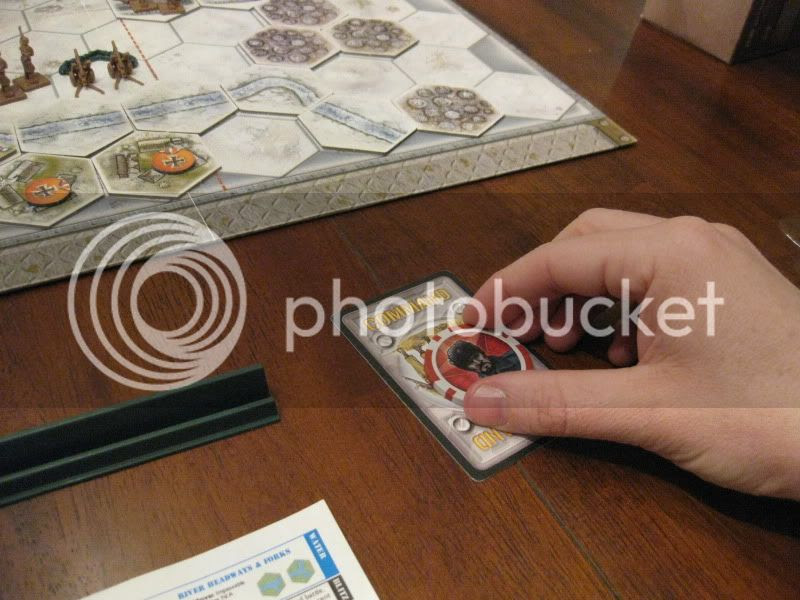 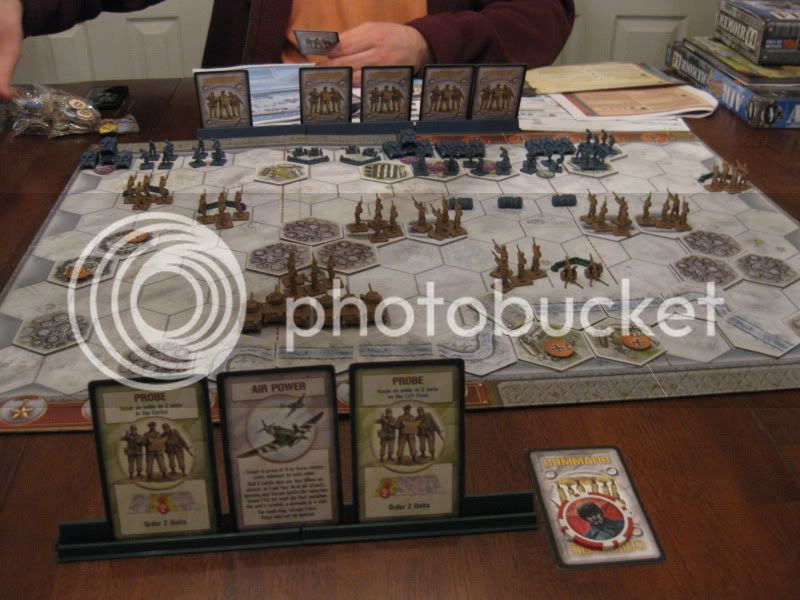 A few exceptions to the harshness of Russian card rules aside, it did bring awesome depth to the play, I felt like I was a frustrated Russian officer at disadvantage, just not getting the support I needed as I marshal a fighting stop, and counting on a lot of luck for my men.

I suppose this is great for fluff players and frustrating for power players, if such a thing exists amongst Memoir players.

Russian Pre-Game Prediction and Tactics: Russian loss. Looking at the mission I figured it made the most sense to play left flank cards as priority from the start to abandon the vulnerable positions the 2 infantry units held North of Golyadi. The town itself gave two medals for German occupation in a 6 medal game, so why feed two unit medals into that inevitable attack, lead by elite German armor of all things. I could almost loose the game on that left flank (which is historically accurate) and that is pretty much what ended up happening in real life.

Assuming I could disarm the ticking West flank, I would then try to consolidate enough of my back line to absorb a German push down the center and a German flank to the Northeast of Nekrasino. I counted on mob tactics, pincer assaults. From there I would get a feel for the Russian Command Rules and also try to adapt to the German’s wealthier card play as best I could.

Game Highlights: Unfortunately for Russia, Patrick rolled with 6 command cards to my four, went first and early-turn trounced my Golyadi pickets almost immediately, not even giving me a chance to redeploy them to the woods in the South.

Ouch. 2 medals early game and the elite 1st Panzers sped into the Western outskirts of Golyadi.

To their credit, my infantry bled the Germans well in terms of the time it took to give up Russian medals (the second squad stuck to a man and ignored retreat flags, stubbornly.) But it didn’t look good. 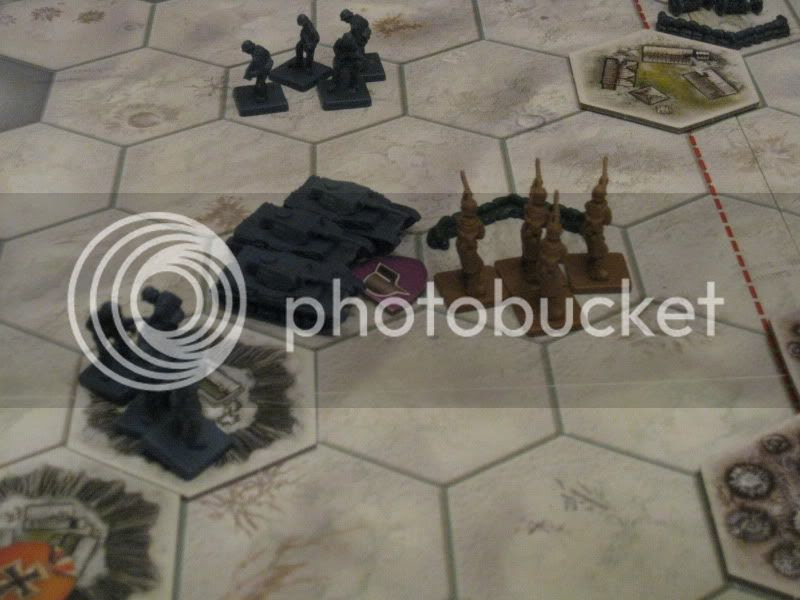 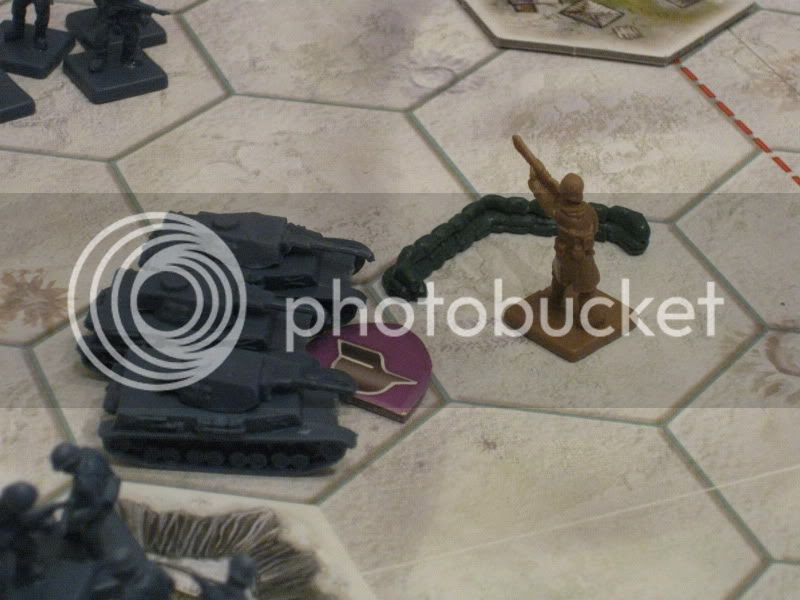 By turn 3 or so Patrick had 4 medals out of 6 by holding Golyadi and inflicting casualties.

I had played 2 or 3 hands with the Russian Command rules and already felt the stress of holding “good” cards for the predicted enemy movements and mulling when to get them under the Commissar chip to play next turn. In this scenario, Russians held 4 cards, which meant that card management flubs were extremely unforgiving.

With my one Air Power card essentially committed ahead of time (reducing its effectiveness when played too) and a Recon 1 card held as a wild card (see Russian Command Rules on pg. 3 of the PDF) that left 2 cards to consider and have as options. Through the game I held mostly left flank cards which didn’t do me much good after Patrick wrapped up Golyadi. I also found I didn’t have much time to “burn” useless cards from my deck on a weak play but I may have to try that in the future more. I did have one particularly stubbon squad of infantry in trenches hold off combat engineers (who ignore dice modifiers for terrain.) 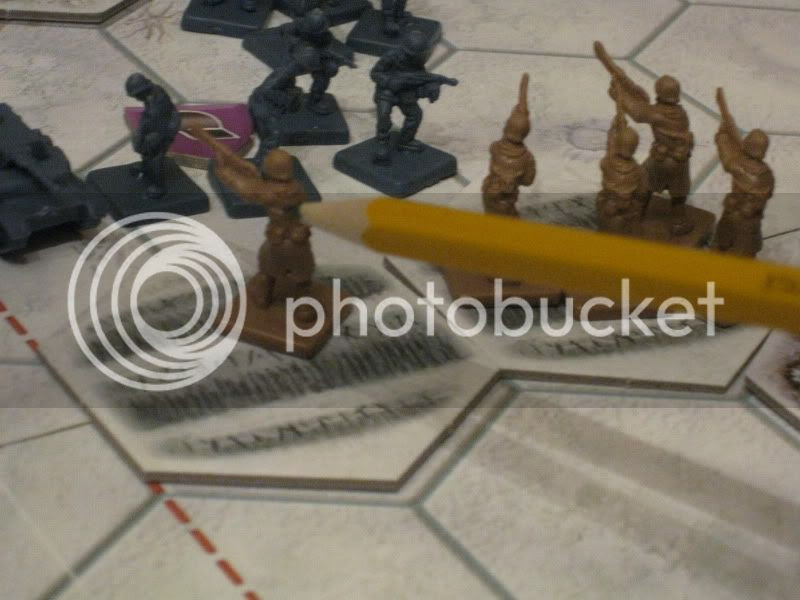 This guy right here... this is the guy

Mid-to-End Game: I was able to play the Counter Attack card once which helped ultimately get a medal and my Air Power card did thin his artillery and reserve tank units a bit but the Commissar chip delayed the opportunity for a strong Allied air attack (I almost never get to roll two dice in a section!) A German thrust down the center sealed the deal for Patrick. At one point the Luftwaffe sent Stukas against the Westernmost T-34’s, forcing them to retreat into the frozen river near Nekrasino and then loose a tank to the thin ice.

I love this expansion so far. I need more games under my belt to internalize how the average Russian card play will be influenced by the Russian Command Rules. This mission seems a German certainty (Germainty?) from the start but that’s why the Russian flavor imbued in the rules works so well… you like playing the missions despite the plodding feeling the army has, or at least, I did. 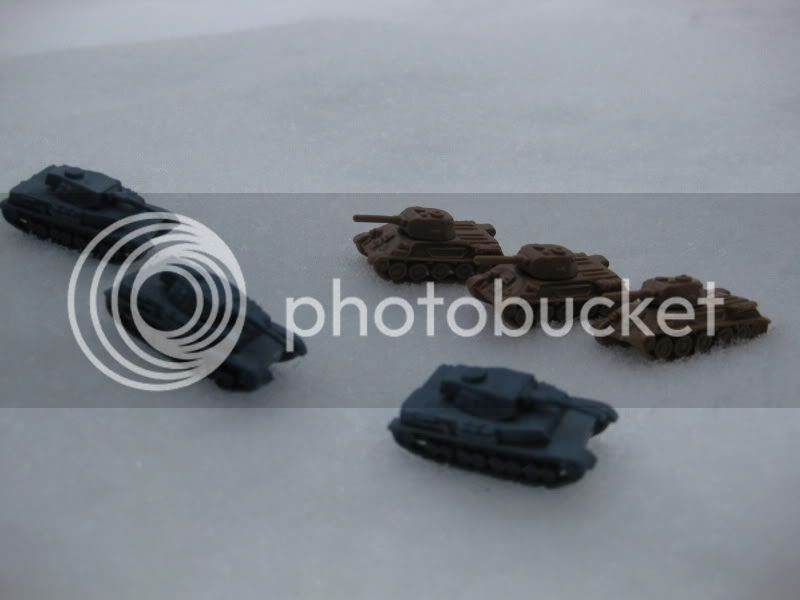 You may be Great Partriots or from The Fatherland but ya'll made in China, beyotches.
Posted by Yeti's Yell at 5:18 PM 3 comments: