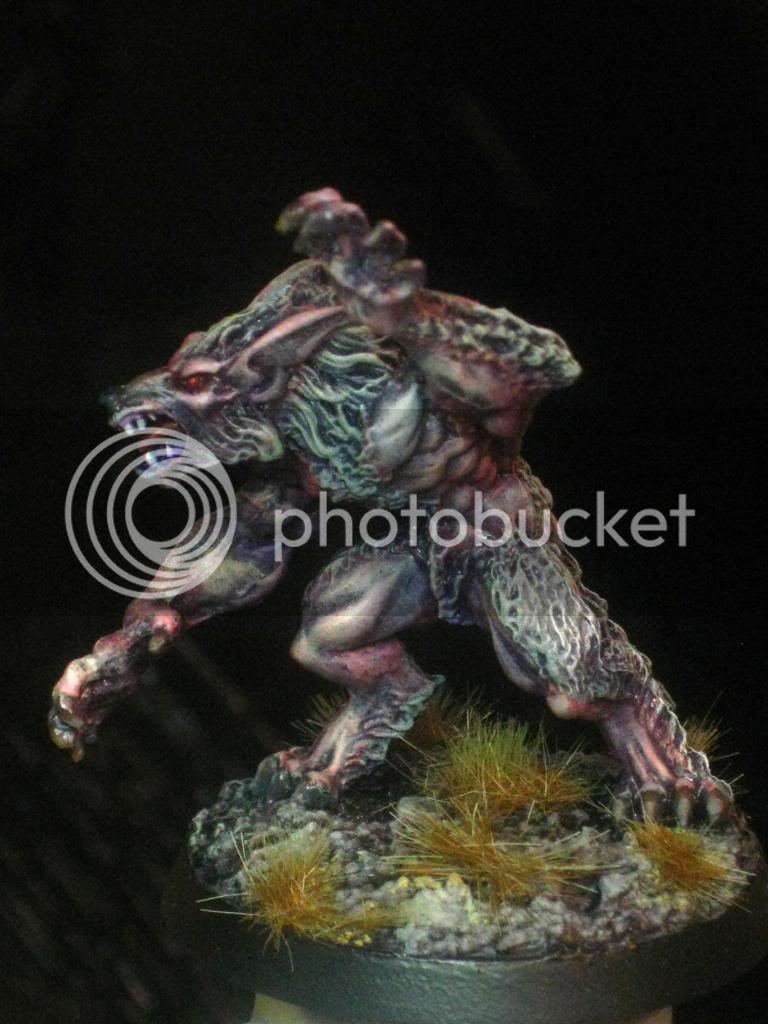 Here's my finished Bones Werewolf. I painted this over 2 nights by drybrushing browns and greys over black undercoat, purple wash with flow enhancer, layers of greys, browns and sage green, glazes of red and purple. Detail work was simple and straight forward except for the eye glow, where I used reds, oranges in a flow enhancer red glaze. I really like this model and loved painting it. It has some weird parts to the sculpt though, his right side eye is out and his left is recessed, which made for some paint decisions that did not sit well at first but I decided it just makes the model visually appealing and whimsical. Practically speaking, there are join lines down his arms and across his chest that were impossible to remove and it being a US$2.00 model, I wasn't going nuts going all greenstuff and smoother on him; he's badass as-is. 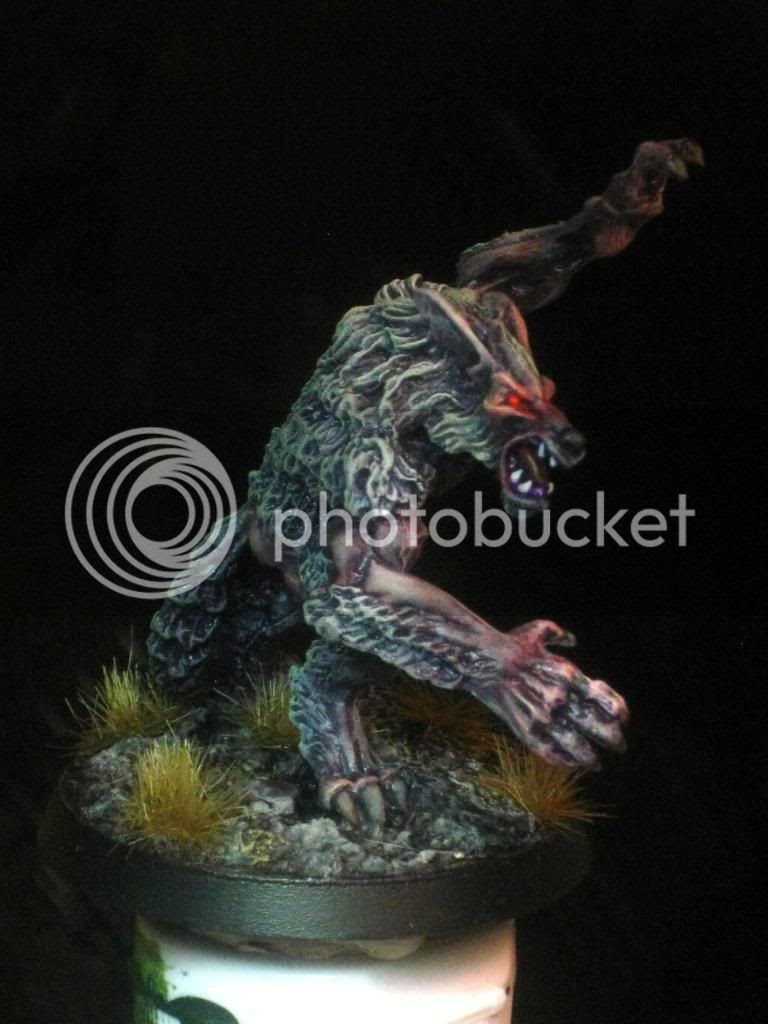 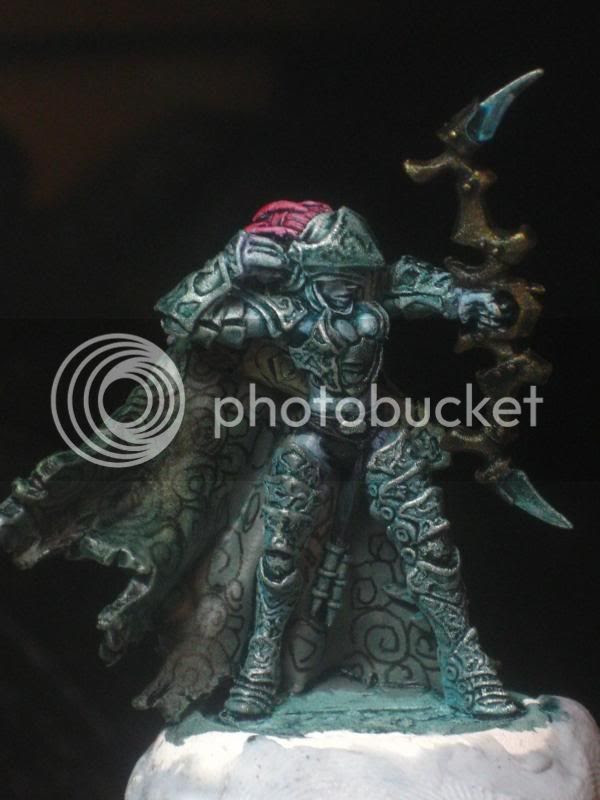 Here's Lylyth from Legion of Everblight. I didn't mention this before but the guideline that I am following with this Legion set is what I put out in a sitting is what the finished product is. Gotta keep to schedule.  Touch ups, corrections and details are allowed later but to get everything to a level of "done" you have to push. That constraint forces you to make choices between what is ambitious vs what is needed and achievable. So the result is tabletop standard and not bad at that. Left to correct: Shade on the inside of her cloak and some weapon clean up. Warpack left to paint: Carnivean and a pile of Shredders. 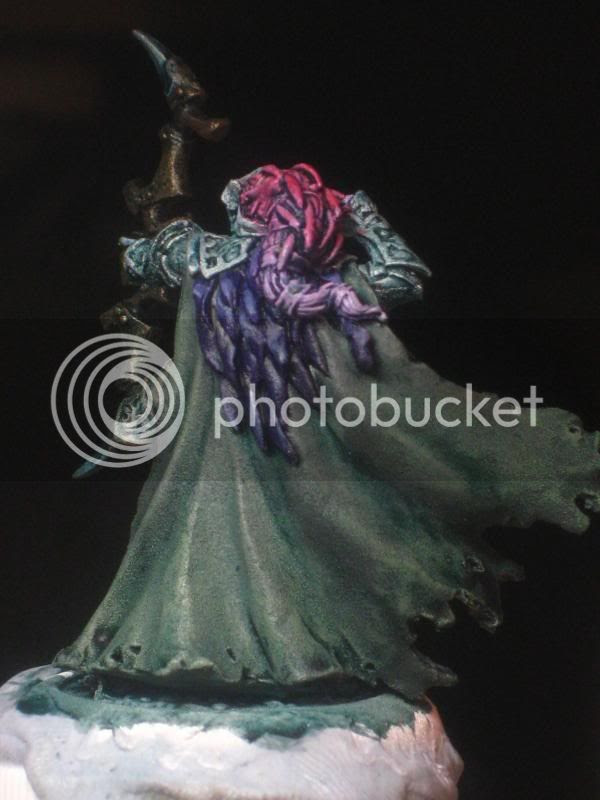 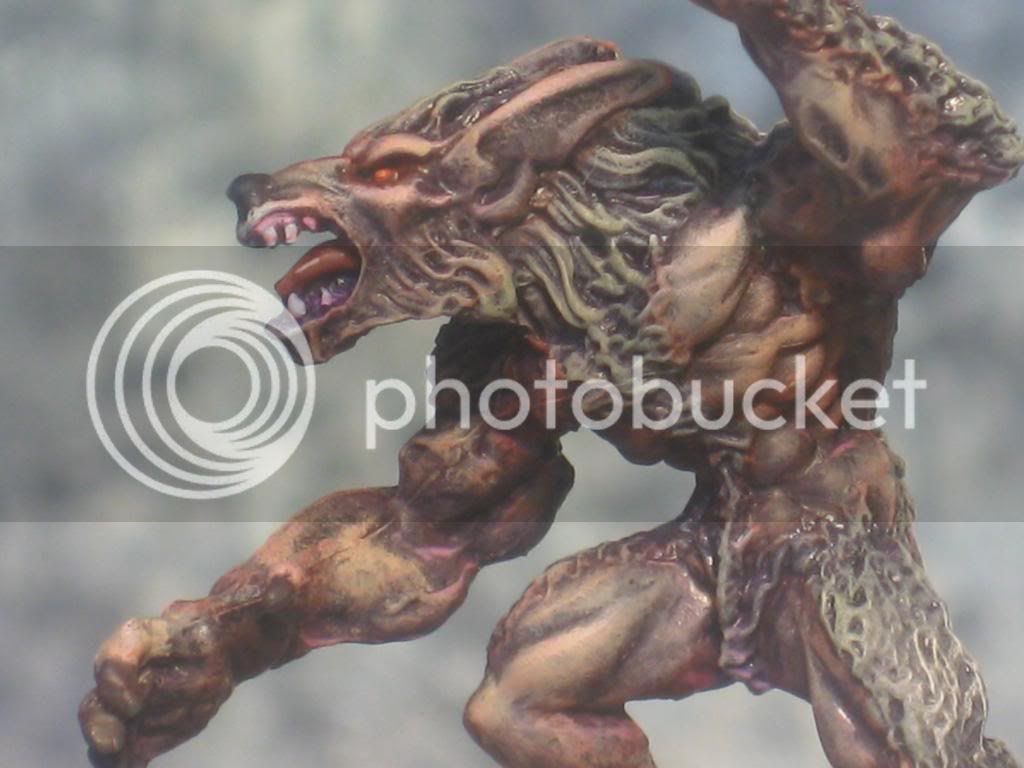 Continuing on with the Werewolf for Strange Aeons from part one, I detailed the beast and did some glazes with flow enhancer, using reds and purples. Up next, detail clean up (eg teeth) and basing.
Posted by Yeti's Yell at 6:47 PM 2 comments: 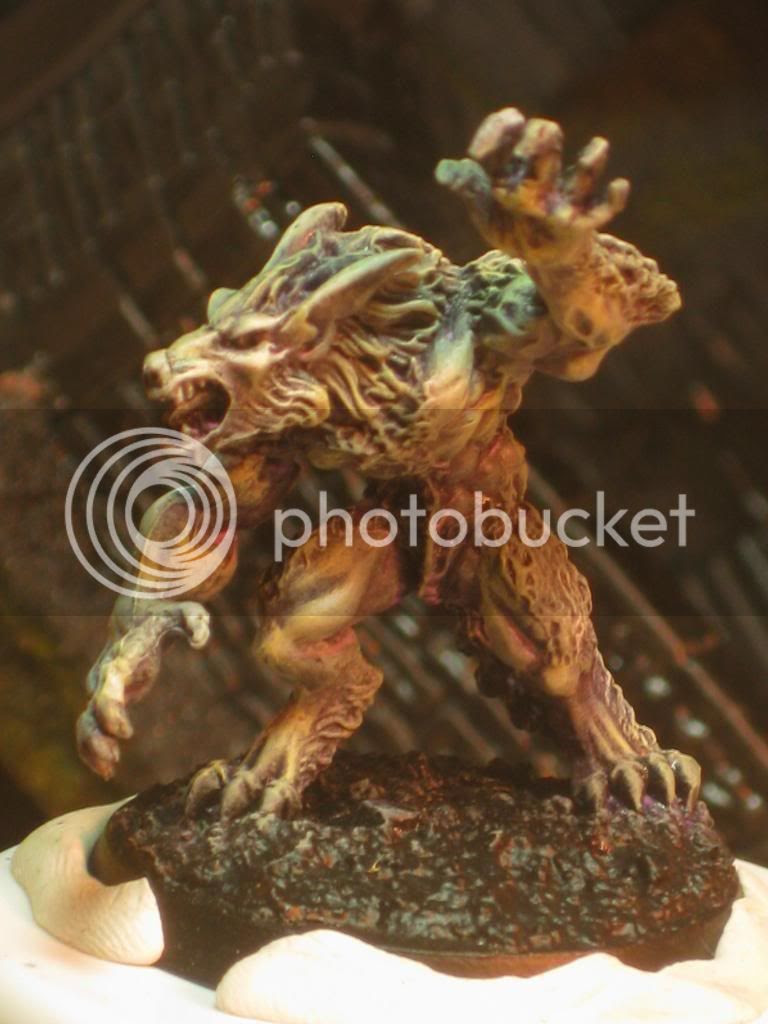 A Bones Werewolf about 2/3 the way done. Needs detailing and basing. I'm pretty impressed with the Bones line, the only neg I give it is cleaning mold lines sucks but for the price you cannot complain too much. Paint goes on well, lots of detail, material is alarmingly flexible but strong but doesn't seem to shrug off paint layers and it retails for something insane like 2 bucks, US.  So, yeah. No complaints at all. Want the Bones Cthulhu!
Posted by Yeti's Yell at 10:21 AM 4 comments:

Here is a WIP of the Foresaken I am doing for Scott... 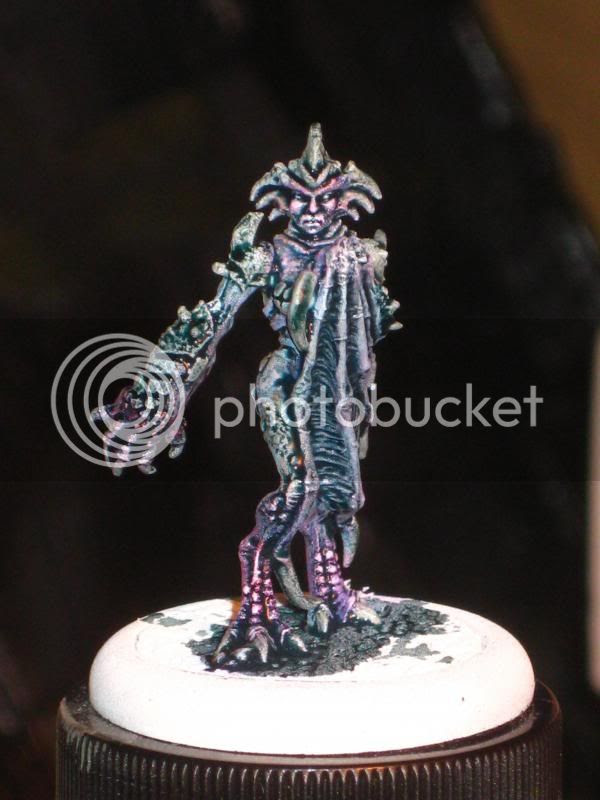 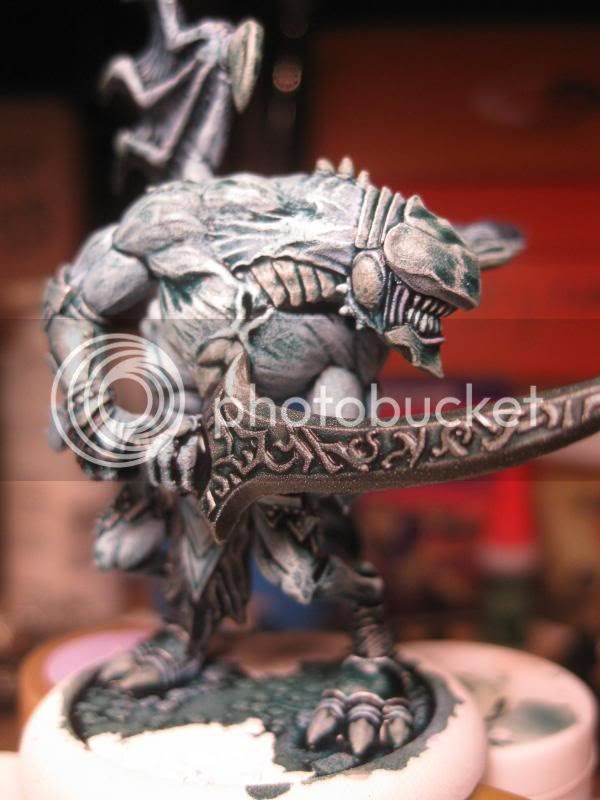 One of my best friends has a son named Scott, who apparently is getting into Everblight, so I offered to paint up some of his stuff, to get the young master to a painted standard. If he is interested, he can use this WIP series as a painting guide when he decides to try his hand. I'm looking to knock this group out in about 2 weeks of PT painting. I am using my paint and water-based stain method for these. All models are pinned and puttied where it matters. I haven't painted much of anything in months so this will be a nice way to get warmed up for the backlog in worthwhile fashion.

All told, this is on the bench:
I added a Foresaken to the group for Scott, since that seems to be a must-have or probably-should-have, according to the kids at the pool hall. 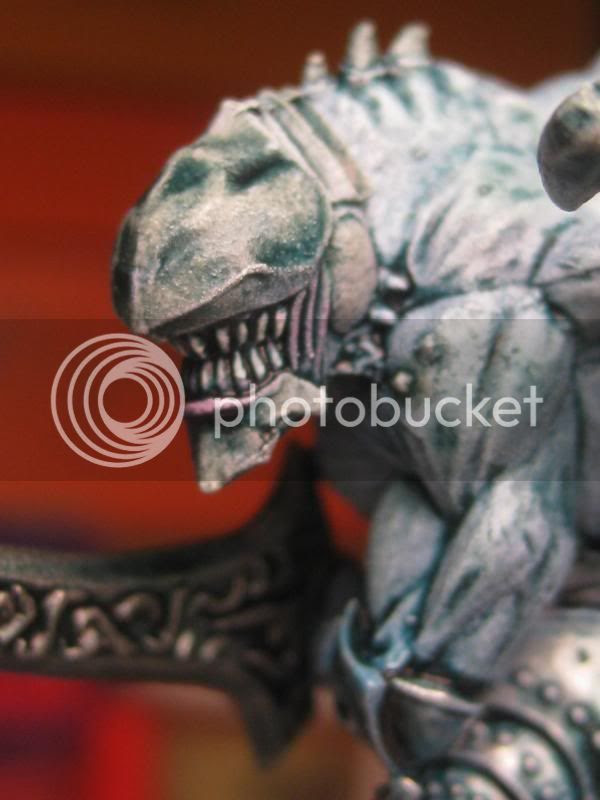 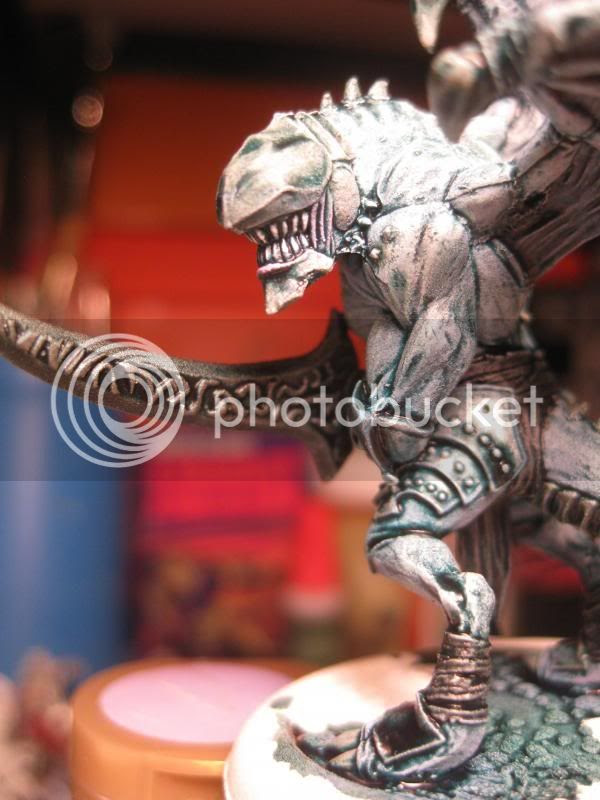 My friends are starting to play Star Wars X Wing with some frequency. While the following article on my Vader list may not be news to vets of the game, it is all news to me and my group, as we learn about squadron building in X Wing.

Since I am brave with transparency, consider this my online dream journal, where my opponents can easily read about my limited understanding of the game, what I am slowly learning and how they can exploit that with extreme prejudice. Cough.

Here is a basic Imperial list that I've run the last few raw dogfights with and some of my wandering thoughts about it all. 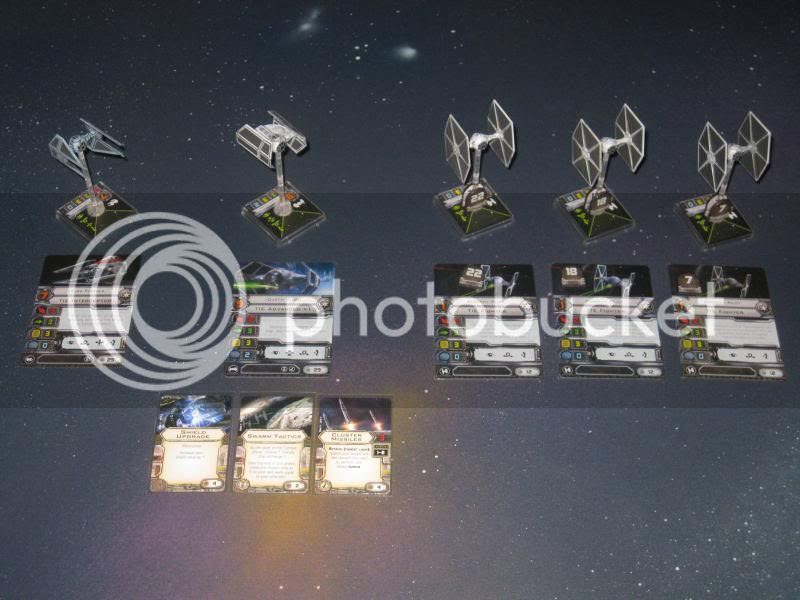 Darth Vader uses Swarm Tactics each turn to have a Range 1 TIE fighter fire at PS 9 along with him. Since Swarm Tactics is not an Action, it doesn't take away from his Unique Ability and goes off as long as the range criteria is met. Since he runs in this list with 3 Academy pilots, Vader and pal should be blasting out anywhere from 4 to 6 shots before anybody else likely has a chance to shoot first.  It seems like Turr probably needs Swarm Tactics too. Turr Phennir is there as an outlier, to exploit weakened prey, flanks and anything else opportunistic that presents itself since he is so damned maneuverable. Anyway, two aces running Swarm Tactics together allows for more opportunity for TIES to take advantage of  more shots early in the game (PS 9 and PS 7) and that may equal more open space as Rebels suddenly explode on the board or provide some depth for the Imps with Swarm Tactics when one eats it. I think 2 Swarm Tactics can potentially have 3 pilots shooting at PS 9 if you line up Vader, Turr and then an Academy Pilot (anybody know if that's right?)

In play, a Darth Vader who only sits at Range 2 might be wasted, even while the board space he yields lets his TIE's surge forward. He needs to be leading the fight point-blank and using his double Action ability each turn to best effect and then, capitalizing on whatever TIE manages to stay on his wing using  their Action for Focus or Barrel Roll on attacks. Vader should probably spam Evade and Focus, if he already has a Target Lock running. That means keeping other TIES out of his "airspace" so he can actually do Actions (by not being bumped), and 2 actions at that. This can be really hard to do with 3 or more TIE's in the mix. Opponents may tend to hunt Vader at all costs to kill him as fast as possible since they know pressuring him is a smart tactic that yields variance in Vader's choice of Actions, perhaps by him drowning in his own choices and picking wrong. Additionally, an opponent may gut Vader's buffs with some lucky Critical hits.

It is easy to see that all upgrades reside with Vader and he still isn't indestructible. But the stickiness that comes with Vader is really what bumping or being bumped and loosing actions does to him. It neuters him like a lava flow to the groin, which is a real thing. Ask Anakin.

The TIE Fighters or, War Squares

So, sending TIE's in to sweep the road before Vader is viable but that's why he can end up sitting out at Range 2 or 3 as the wedge of TIE's goes ahead of him. If he is not using 2 Actions to direct effect each turn and he isn't close-in, then this list isn't for you (or maybe Vader is not for you).

The above said, TIE's are really fragile, super disposable and even with Vader shepherding, don't expect TIE's to last long, so you should aim to get kills with them before they explode. X Wing is a game where the shelf life of all pilots starts running out at the drop of the puck, some faster than others. That means set them up and fly in formations Vader can hug up against and support. If you let TIE's die without them stripping shields or blasting hulls then this list may not be for you.

Back at Base, We'll Have Scones

In conclusion, this is the "tankiest" Imperial list I've played so far out of a half dozen games total and I think it is a winner but I am not sure if it is the all-comers list I am looking for. So far, this specific list is 1 Win one Loss with iterations of this list doing better in the Win bracket.

If anybody else has some tips or experience, please feel free to share. In the meantime, I will report back soon to let you all know how Old Inhaler Face is doing (that's my 9 year old son's name for Vader).

P.S. Everyone should check out Void State's Unofficial  Star Wars X Wing Miniatures Game Squadron Builder, it kicks ass. Validation, printing options with detail, point costs and card text... it even has an All Squadrons section where players share their favorite lists. It's all here, all free and just slathered in awesomesauce: http://x-wing.voidstate.com
Posted by Yeti's Yell at 3:51 PM No comments: