I picked up my first ship of Wave 4, opting for the most interesting (Cloaking mechanic) vs the coolest looking (Headhunter or TIE Defender). The E Wing is really nice, according to her girlfriends, and has a great personality. She's also sitting home alone on Friday nights, watching The Middle with her Mom and little brother. Well, in my mind anyway.

Let's just start off with how I'm probably running this ship my first few games. The Phantom comes with a Cloak Action and Decloak. Notice that Decloak is NOT an Action. When you use a Cloak Action it gives you a Cloak Token, which goes on the ship and is not removed at the end of the turn. It remains until you spend it to Decloak. Cloaked ships add 2 Defense dice, bringing the base Phantom up to 4 Defense while cloaked. You can't attack while cloaked but that is made up for with base 4 Attack dice. Like the other Small ships that can take Crew (HWK) it can take 1 Crew. Upon decloaking before you reveal your dial, you take a 2 Straight or 2 Barrel Roll (also not an Action). It's easy to imagine that this is the ship not reappearing exactly where the enemy expects. This sets up some interesting ambush or dogging tactics. The dial is workable, it feels like it is cruising at 2 and 3 and has a sprint of straight 4. You are shedding Stress with a complete set of 2 moves, all Green, which I like. She has a red 3 and 4 Kiogran which I was surprised by too. 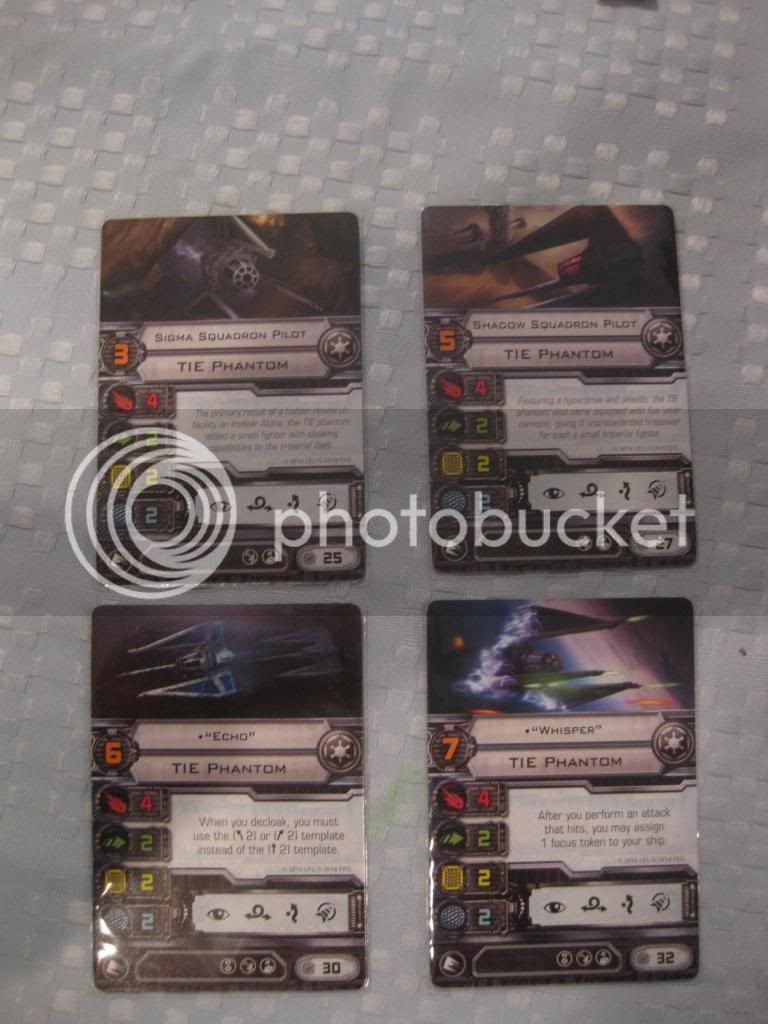 Some neat ability and options are on these cards. Being the compulsive shopper I am, I opted for psychological warfare instead of hitting power and doubled-down on the Cloaking ability. To do that I needed an Elite Pilot Skill and so, Echo.

I took the named pilot, "Echo" along with Stealth Device to give him 3 Defense dice uncloaked and 5 Cloaked. Push the Limit allows for an Evade or Focus to pad out a Cloak ability or Evade and Focus while cloaked. Echo's ability to use the 2 Turn templates instead of a 2 Straight upon decloaking is ok but I really took Echo for PTL via Elite Pilot Skill. You are looking at 36 points for everything you see here. Interesting, no?


Look, 5 Defense dice is nothing to sneeze at, inconsistent as that may be. Decloaking behind some Rebel ship and throwing 5 Attack dice at Range 1 on an Ambush is pretty damn fine as well. To follow an old paint-makers saying, "you can make it nice but can you make it twice?" I don't know yet. It may be that the build above doesn't do much after you unzip your fly and take a shot. I guess it comes down to how much of the game you want to spend cloaked to begin with. For now, I like the odds it has to close against Rebel turrets and not bleed-out en route to Range1 or going stealth as the lines cross, head-on.  PTL is awesome on almost everything but if I find it's possibly overkill for the role this ship trends towards then I'll gladly take Determination.

I gotta say, I think the Cloak action is pretty elegant as a mechanic and it will be interesting to see if anything else ends up with it. While not FFG-legal I will definitely be removing the ship from the base when Cloaked for the visual gag during friendly games. Becuase why not.

The above is not a deep analysis of what you can do with the Phantom, more like a first blush response. I've found that my dream builds of newly released ships usually equates to going to the gym and just working the vanity muscles. Looks good in a pic but living it may be very different than anticipated when there is heavy lifting to be done on the job.

Well, I'm off to my sister's this weekend where I will face my Rebel-Scum-in-Law Mike. I'll share out how the Phantom worked in a (ulp) 100 point list. 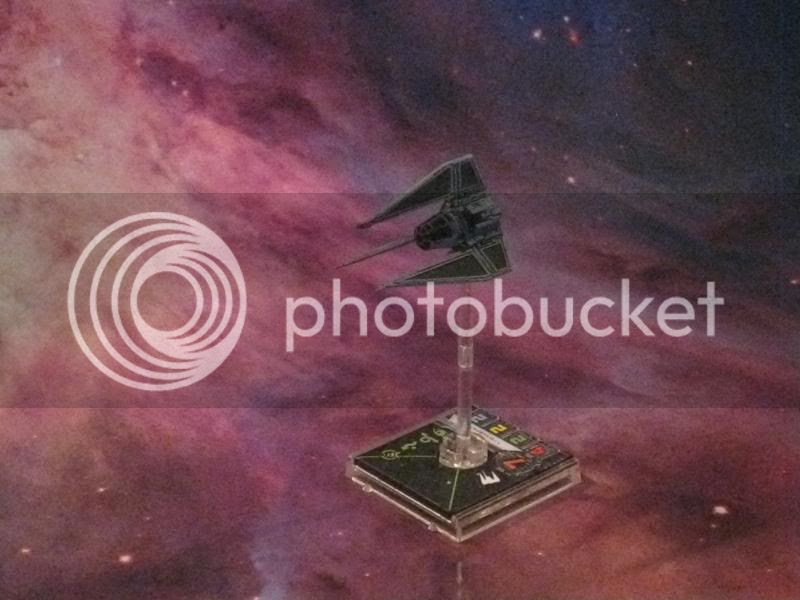 This update is overdue. I bought an X Wing expansion a bit ago to pad out my army lists for the bigger format games these days, thanks to the largemungus Rebel Transport and Tantive box sets that were released.

When I opened the blister I noticed that the "female" peg that was seated and glued into the X Wing model itself wasn't seated all the way in before it was glued at the factory. I didn't think it'd break. It did, right after I put a flight peg into it. Bummer.

Let the record show that I own multiples of every expansion except for the new large ships and Wave 4 so I had not seen this before in X Wing Miniatures, nor any other FFG game I own. I didn't really worry as I pushed the stirring pangs of buyer's remorse back into their dysfunctional drab corners of my mind... but they did stir.

I used FFG's Replacement Parts section on their Customer Service pages and told them the deal, sent them a pic. I only asked for another female peg as replacement since I could easily remove the broken one and replace with the new. Interface was easy and a message back landed within a day. They'd replace "it".

A brand new X Wing showed up at my door about a week or so later. They probably had to handle it that way since they probably didn't have access to sending out just a single peg but I was really happy with the service.

Well done FFG and thanks! 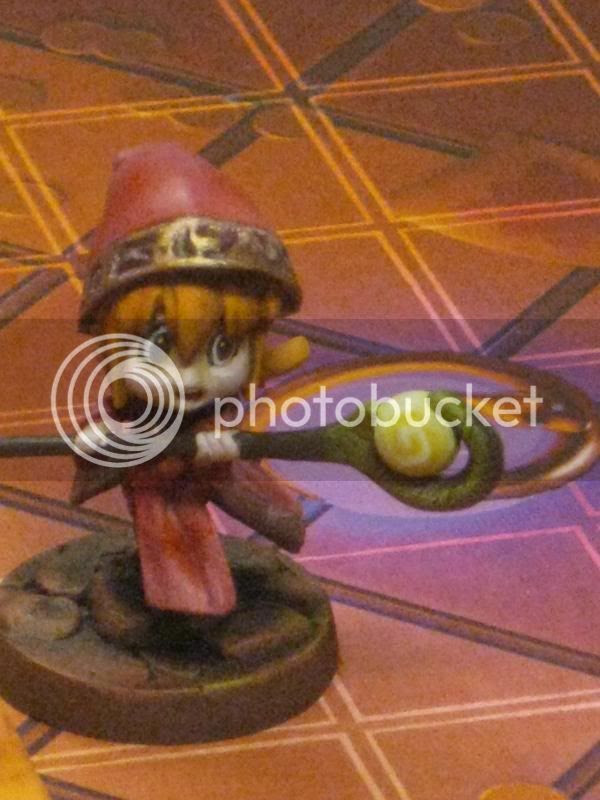 Just a few fast pics of a fast paintjob on Ember Mage. I finished her (for now) awhile ago, just never posted until now. Since my son and I share a birthday on June 21st and we both love SDE, I have some big buys in store for presents and so, more SDE up on these pages some point soon. 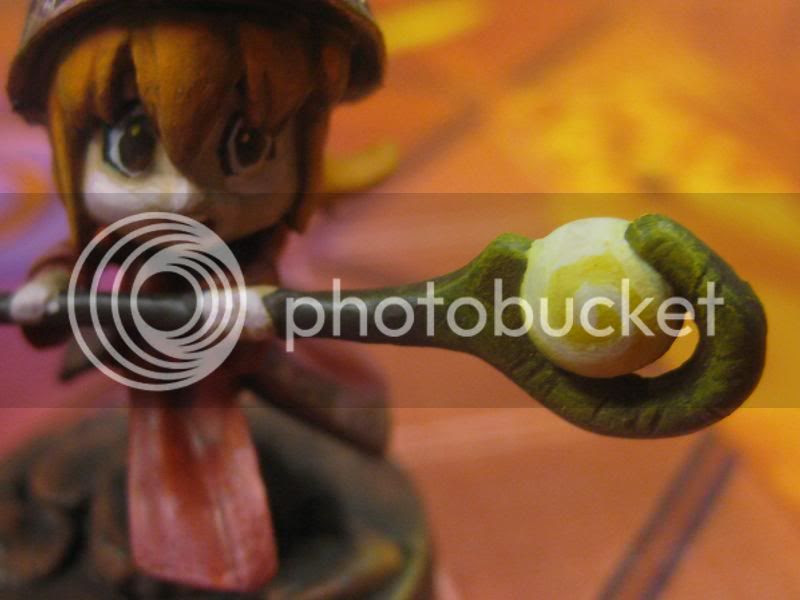