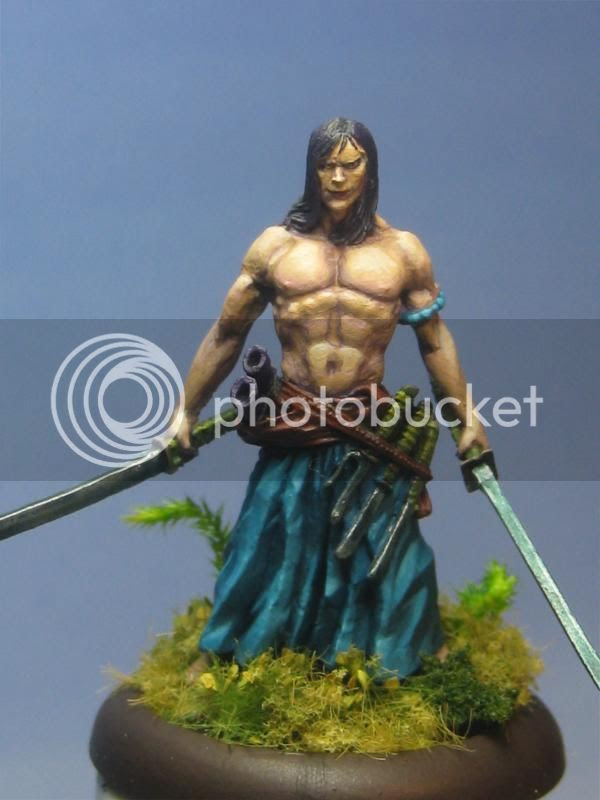 I knew a guy who was typically found outside of a bar at last call taking off his shirt and fighting for whatever dim reason rattled around his brain pan. Itsunagi is not that guy. He never put on a shirt to take off to begin with. And he is a clinical killer. That's why he wears the smirk of a guy who knows his opponent is already dead and what that means in the schemes of Itsunagi's machinations.

This sculpt is incredible. Assembly was good. I had to trim and gap fill his right arm to make his bicep look right. It was a very clean cast. 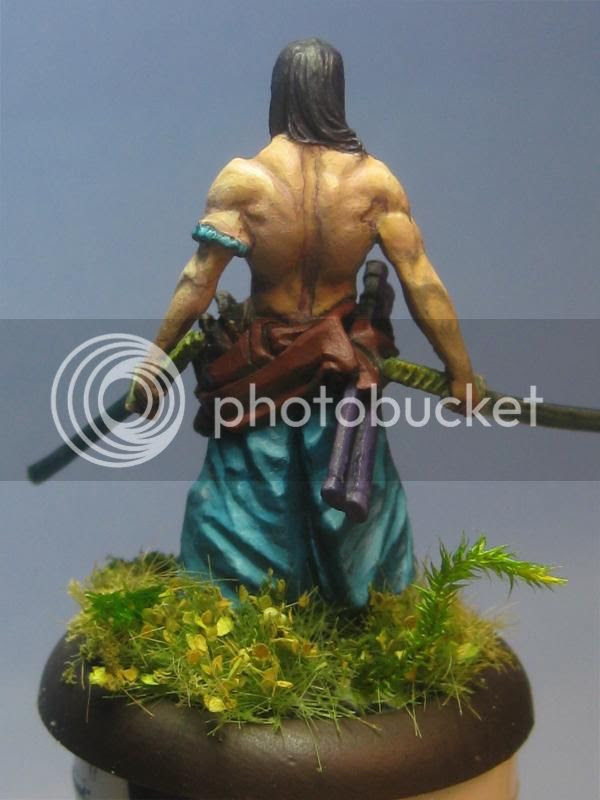 When I looked at this box set I left him for last, knowing all that flesh that needs painting would either be something I got into or just sorta mailed in. I decided to spend time getting into it.

Last night was his first game and if I recall correctly, he killed Wasapu from Silvermoon Syndicate outright and stood down a poisoned Manu until Chiyo moved in for the coup-de-grace. Badass.

And with Itsunagi finished, the Ito box set is done. 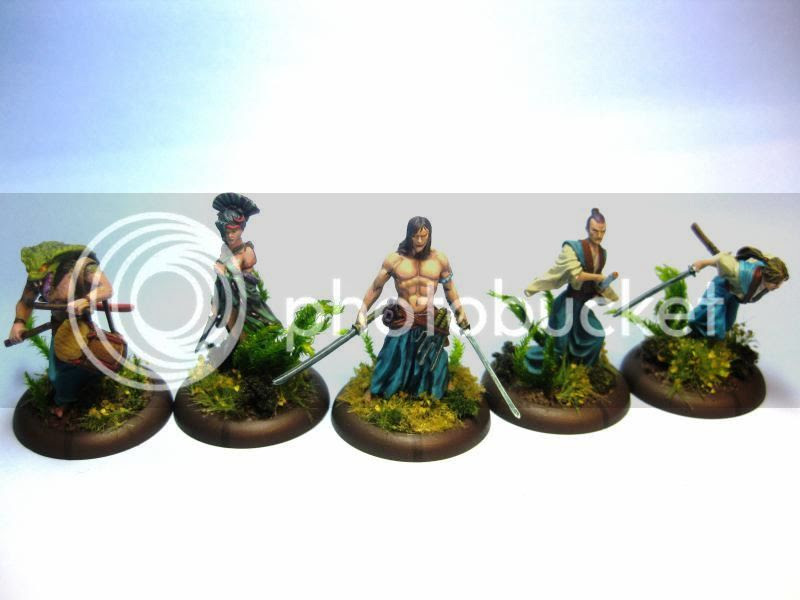 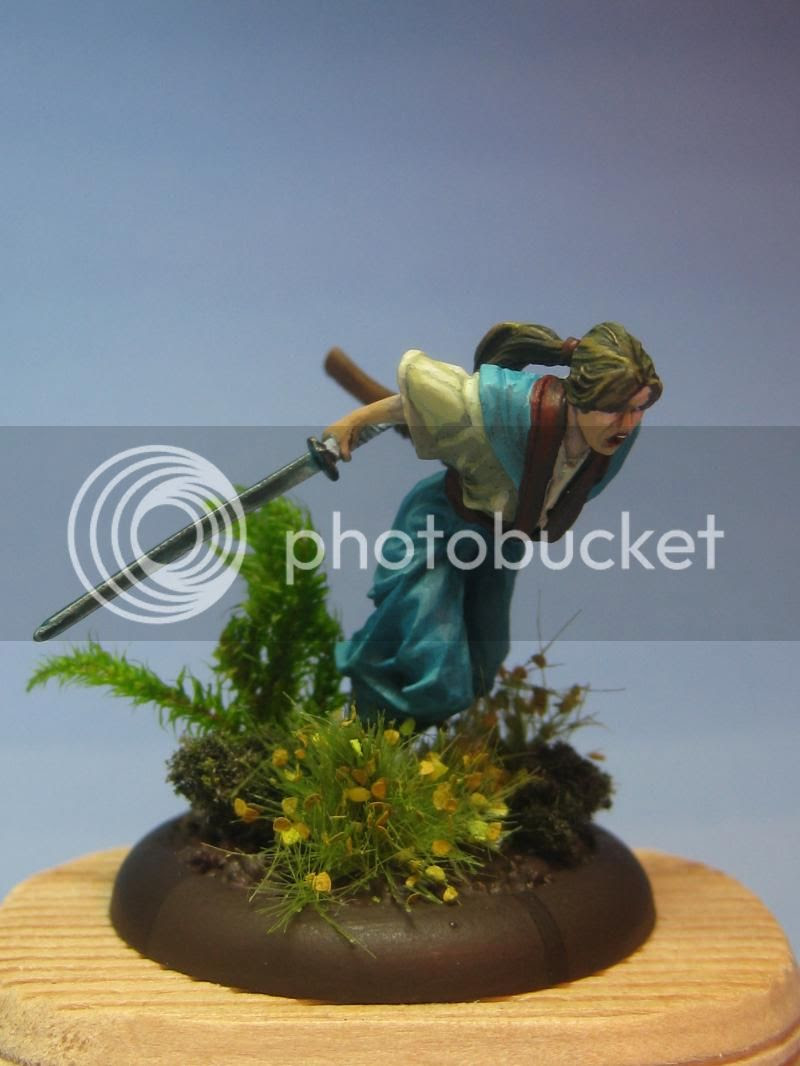 A named Temple Bushi and a pissed off one at that... somebody is about to die by Chiyo's sword and good luck with all that.

Another knock-out GCT Studios sculpt that I was just about able to do some justice to, the design of this model is crazy awesome. The only gripe I have is constructive. The model was de-molded too soon and so, some piping was lost on her kimono and there was a flash line running North/South on her face that left me doing plastic surgery in ways I do not enjoy. But in the end, she came out great. My buddy Pete pointed out GCT's replacement section on their website. Ok, good to know. Practically speaking, I like that I can run her as Chiyo or just a separate Temple Bushi. Kore de o-shimai!!!! 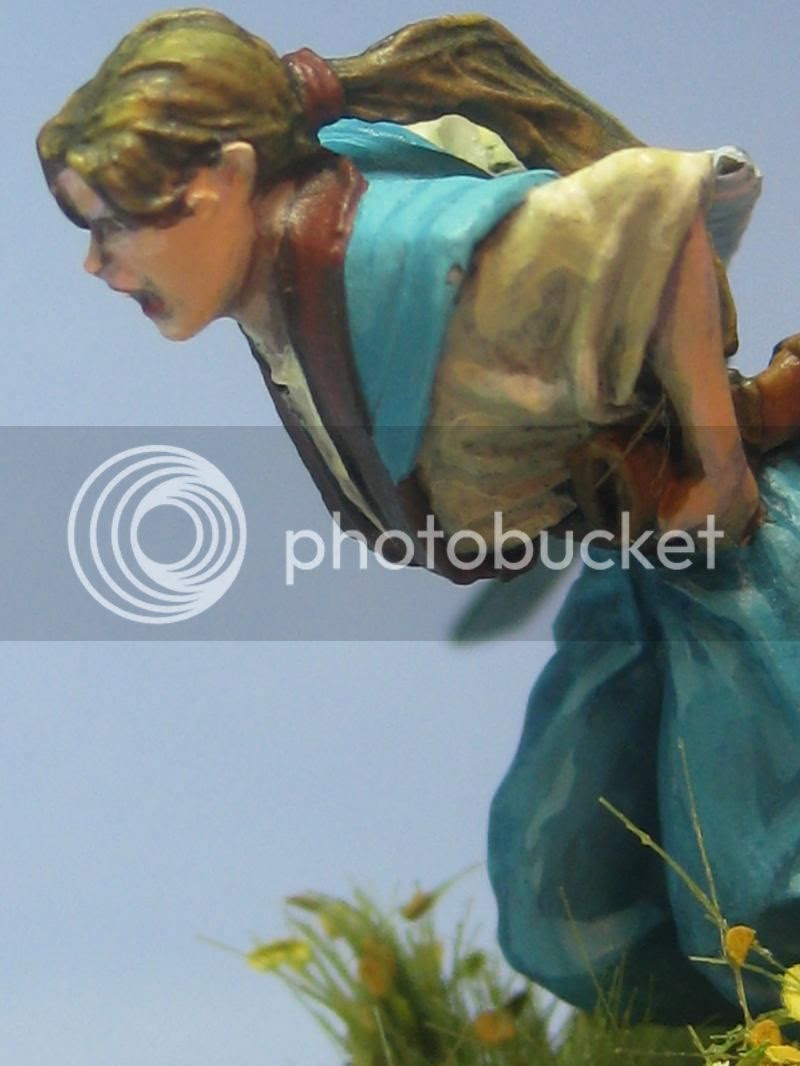 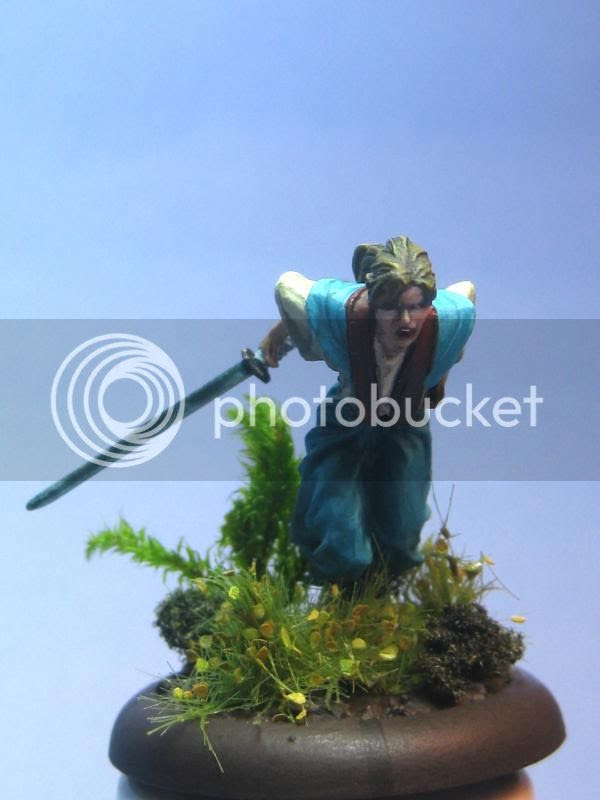 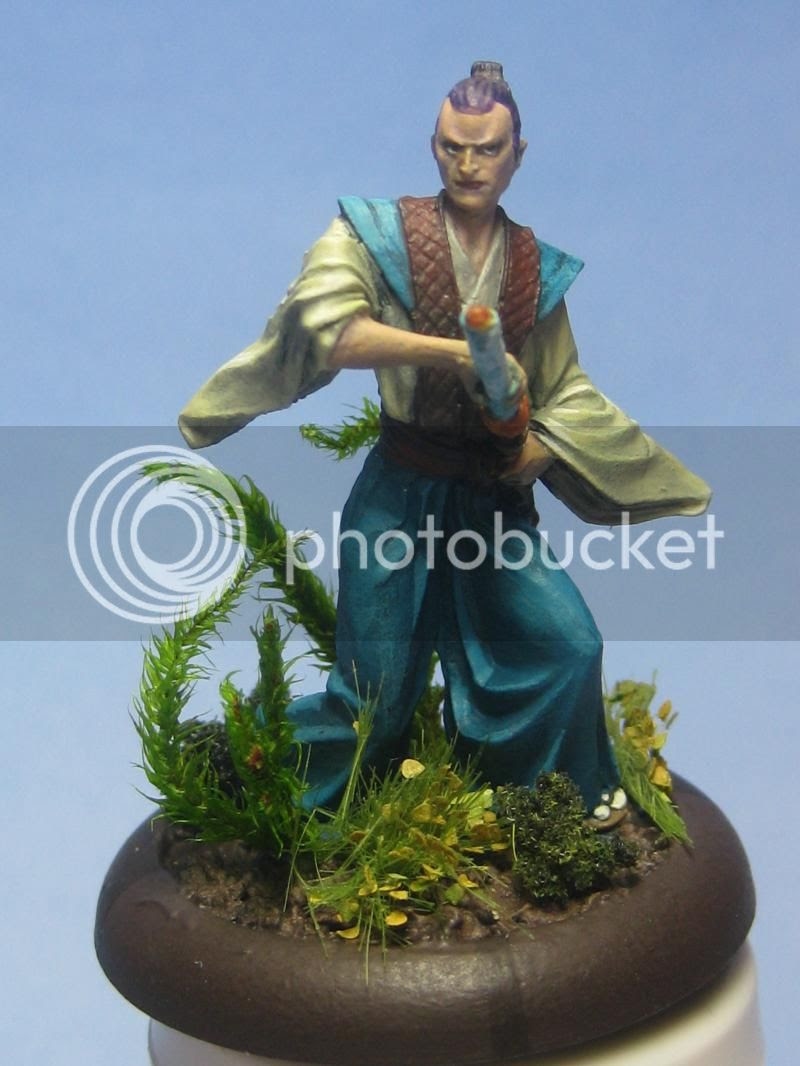 A temple bushi leads a spartan existence. They live for their lord and sacrifice everything for the greater good. Hell, they share the Bushido card with another poor slob who will no doubt end up a similar quivering pile of bloody sushi and shredded clothing under a fern. But this guy has the sculpt of true determination to get killed in the most heroic fashion and maybe... just maybe see another game.

As lowly as he is, he is my first Bushido paint job and my most favorite. I failed to get every bit of flash which is unfortunate but the calmly wound up tension on this sculpt is undeniable. I never had a better time painting robes and I mean that. Great fig. 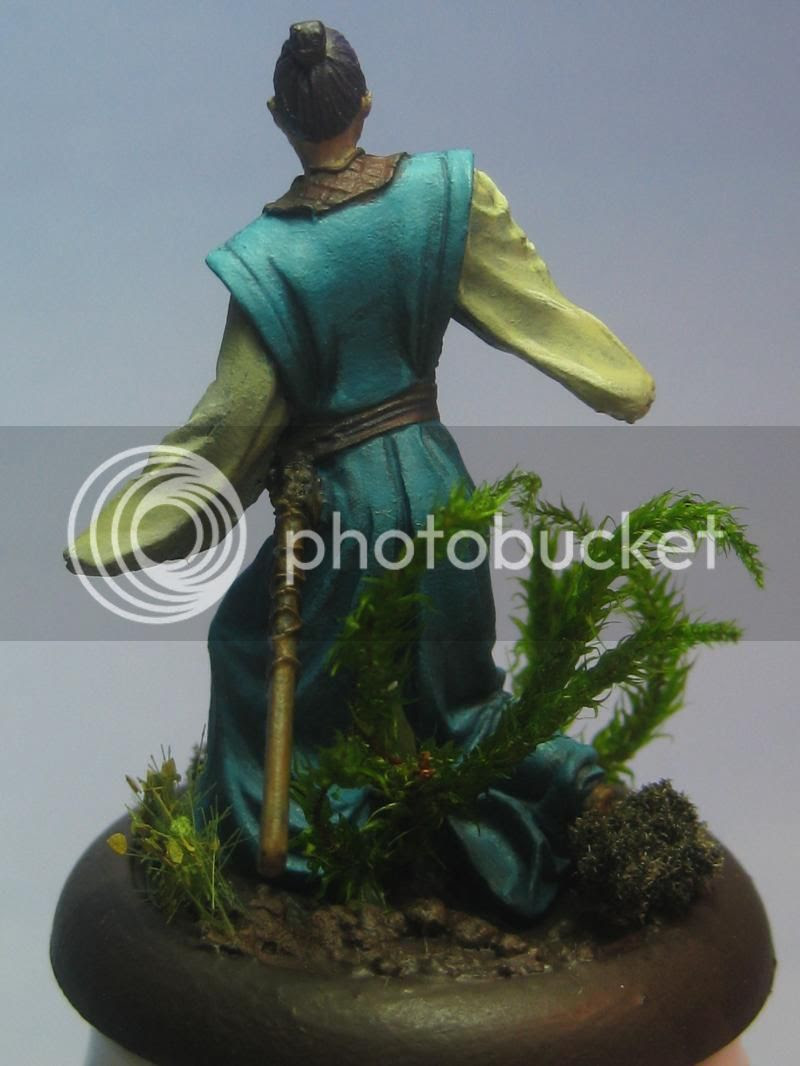 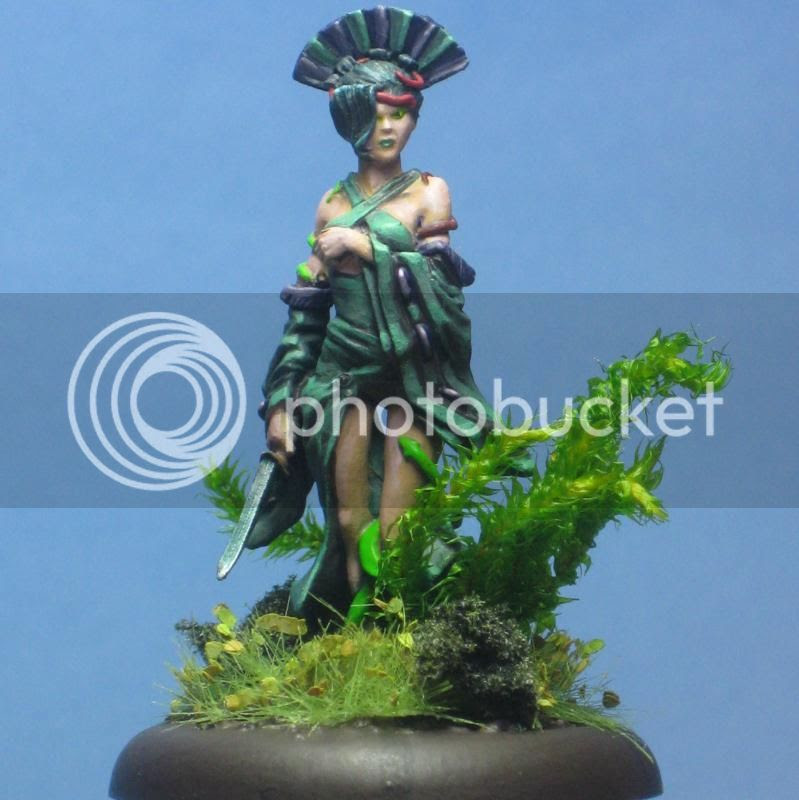 This is Sakura of the Ito. Pretty straight forward here, nothing fancy as far as colors go but I did elect to give her sort of rheumy eyes like her veins are truly flowing with poison. Her sculpt is simply awesome and really rewards attention to painting. I elected to take a pass on the ubiquitous back-tat... I think I need to do some sketches first before I tackle something like that. I may come back and revisit some details here and there but the goal was to bang out this set so she's a done deal for now. 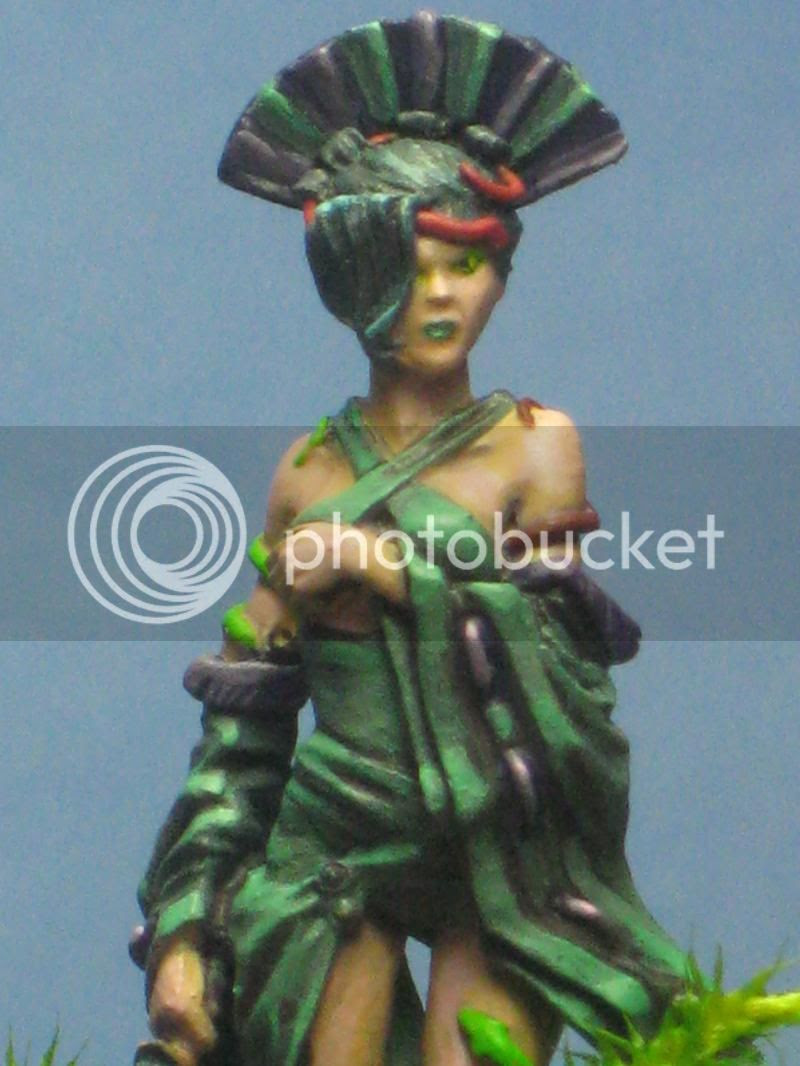 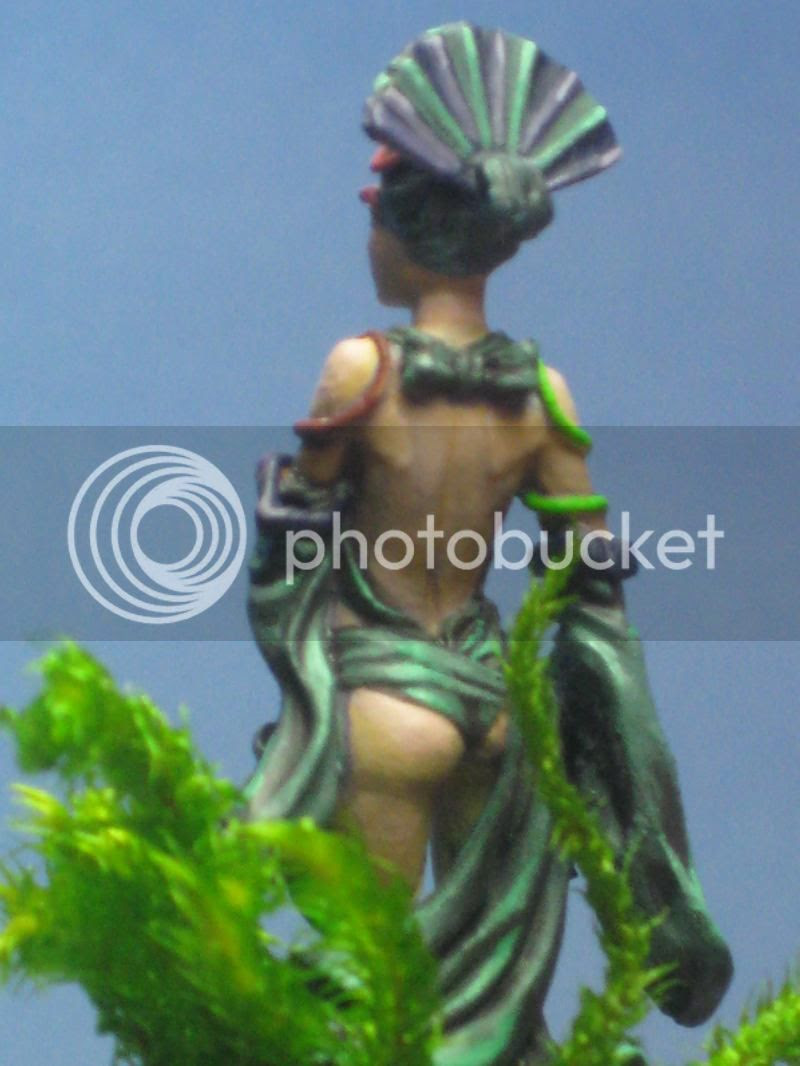 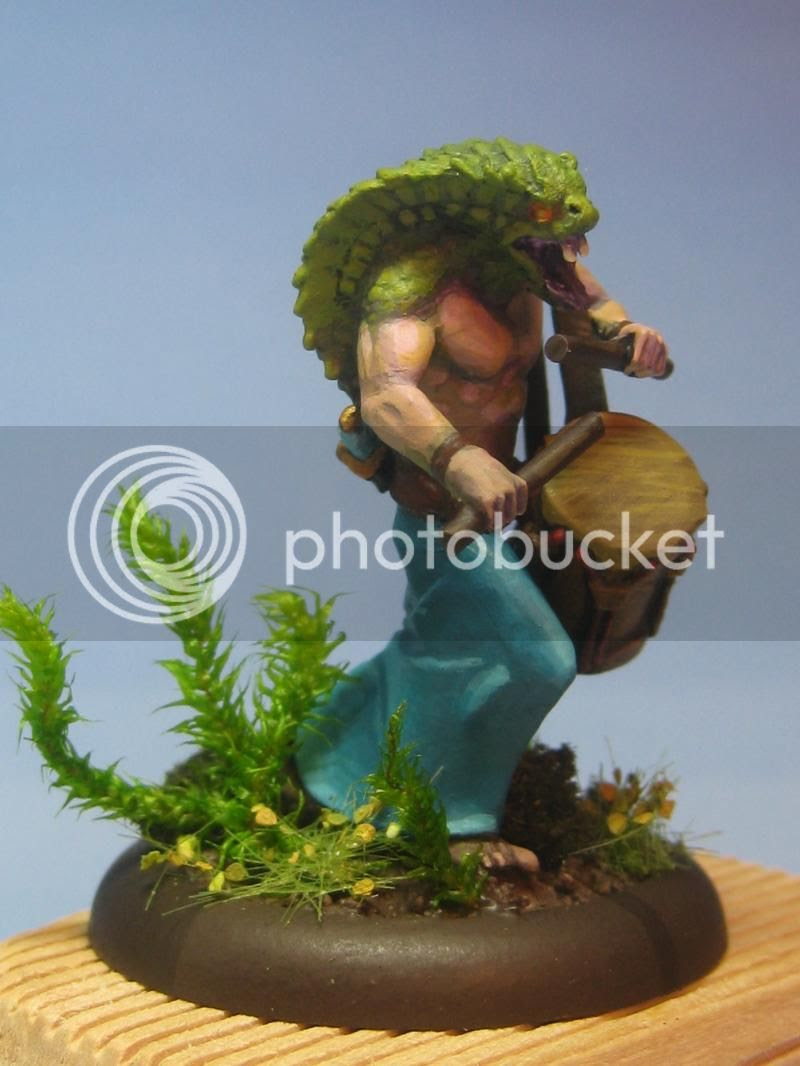 Here is GCT Studio's Akimoto, complete with fighting-sticks-turned drumsticks. I had the drum bit sitting around since my Mordheim days and the more I thought of a wandering snake man drumming across the island and perhaps even fighting while drumming... I thought it was cool. So there you go. 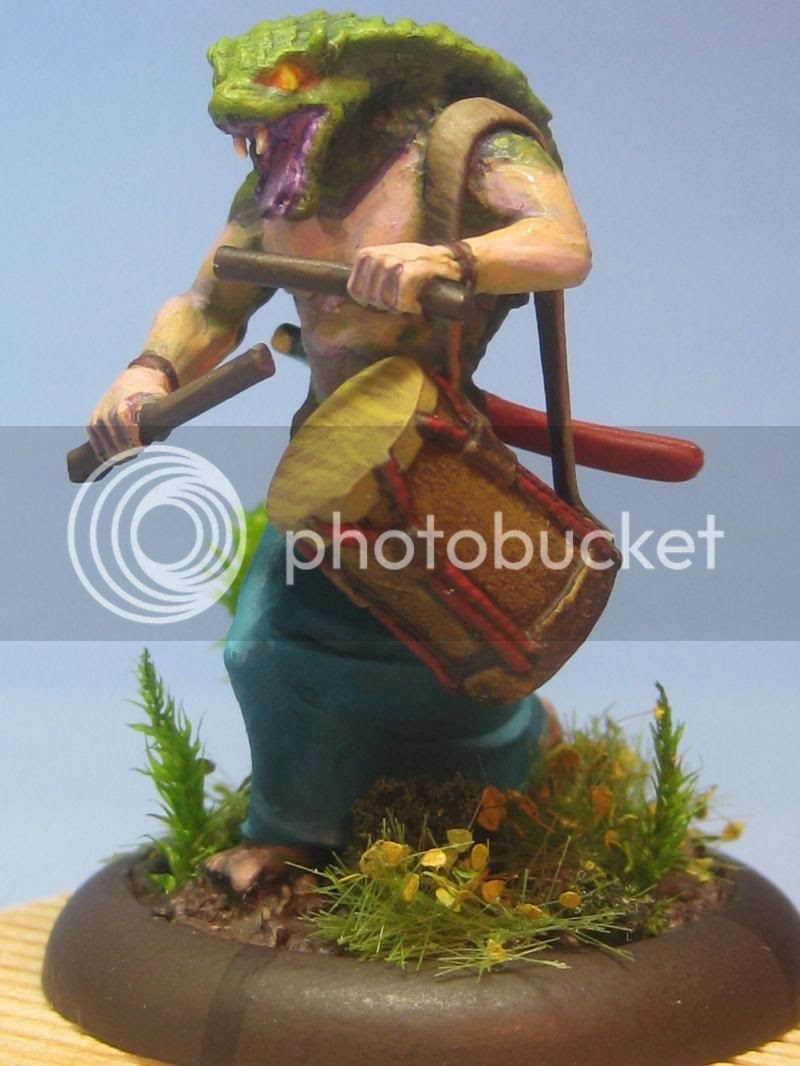 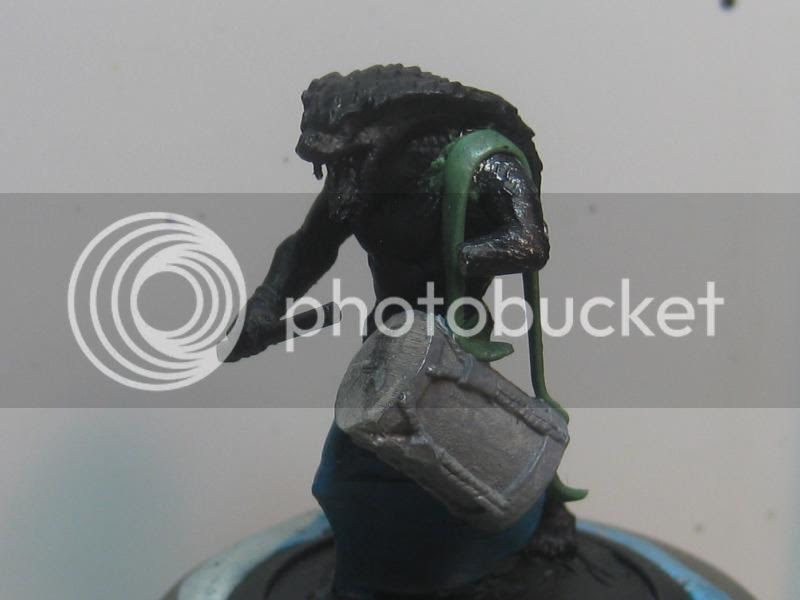 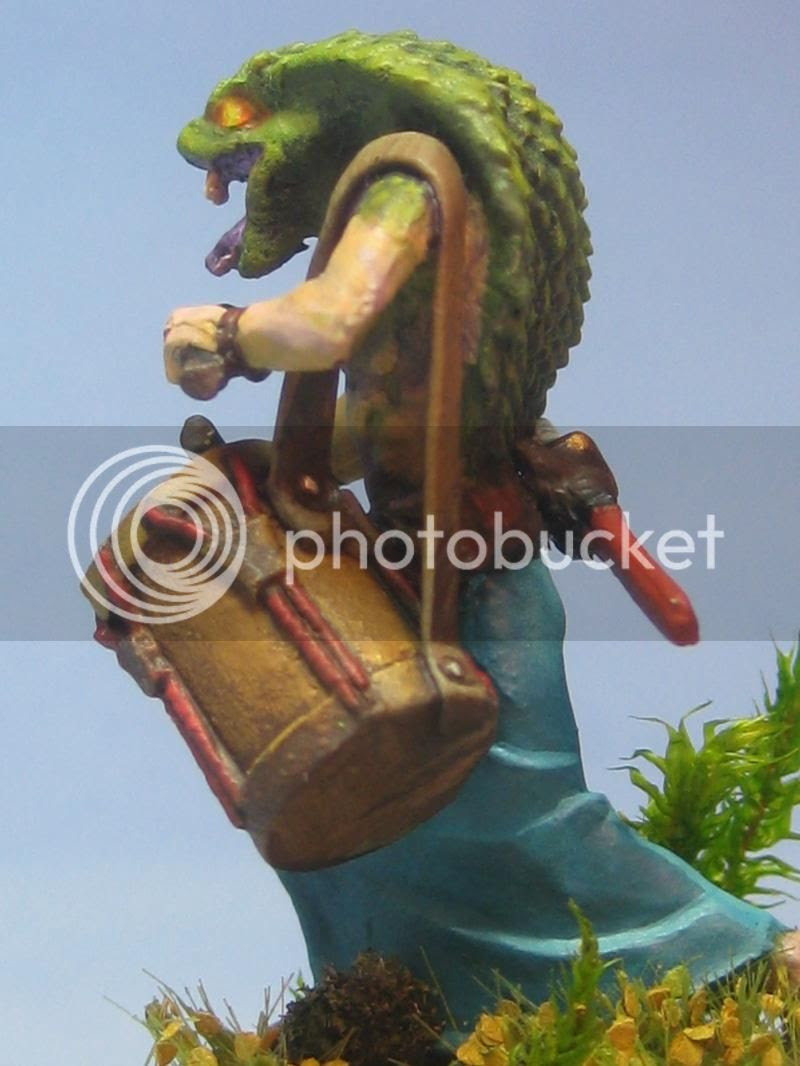 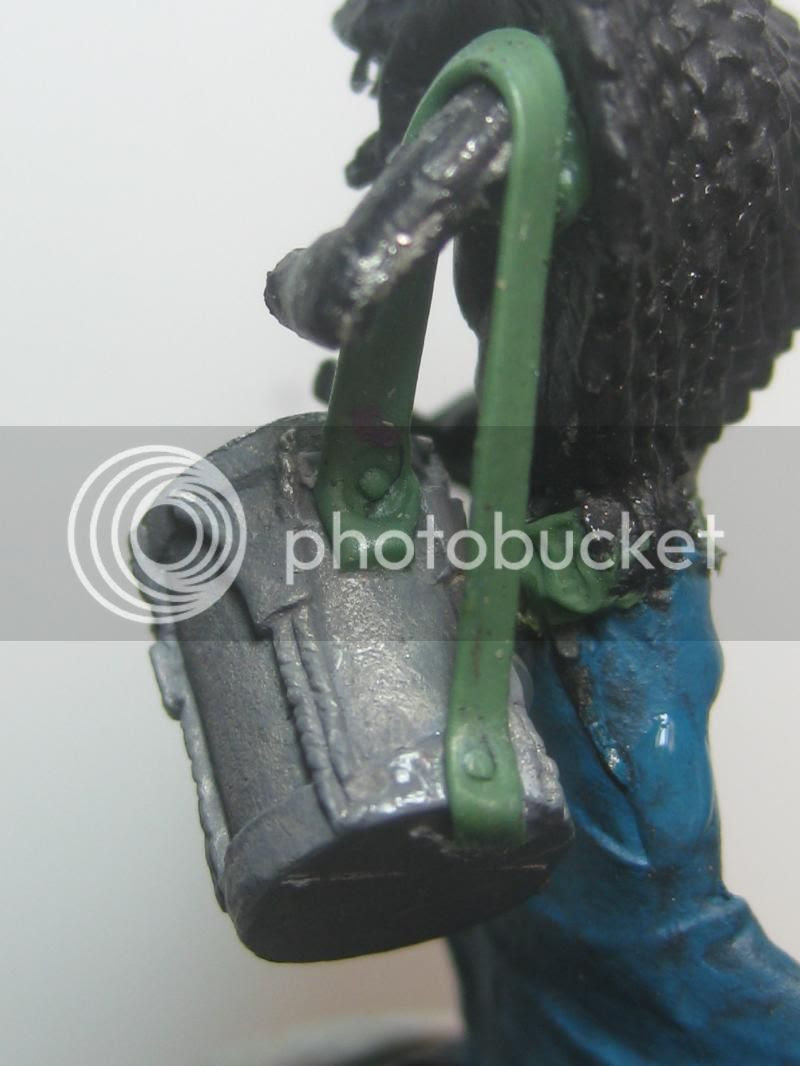 The drum bit is pinned at Aki's waist and the strap is greenstuff. I bent his left arm and used the strap to hide the gap between arm and shoulder. I reinforced in the armpit (phrasing). I got a tad lost in the sculpt while trimming flash and so missed some details here and there. The funny thing about great sculpts like these Bushido miniatures is that the features are delicate and very artistic. And so, once primed, I can easily forget what the element I am painting is supposed to be. I struggled a bit with the flesh tone on this guy and had higher aspirations on the transition between cobra and man but there it is. Close enough for government work, as they say.

Now to just remember that he goes first every turn... 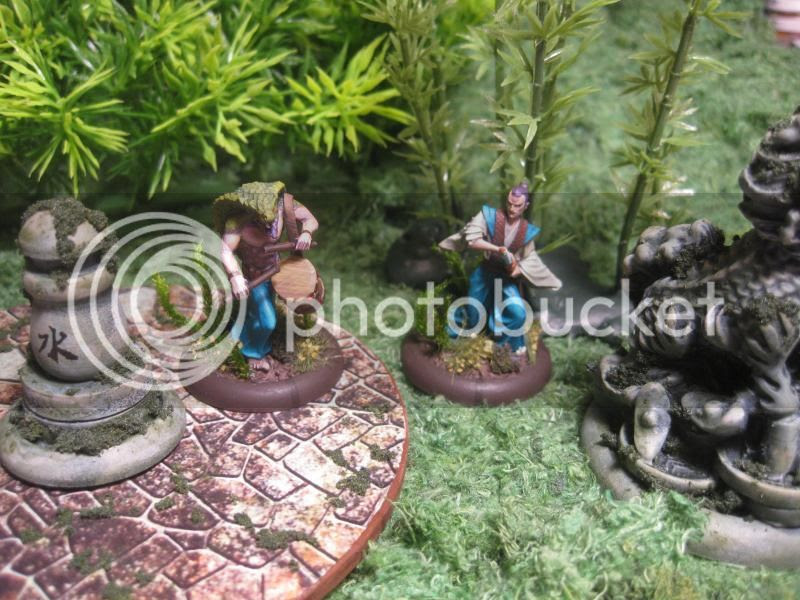 GCT Studios just named yours truly as a "Best of the Web" site for the Bushido work I'm cranking out these days. I had no idea that was a thing but I am totally grateful. Thank you! Props to my boy Pete for noticing. Surprised to see my stuff up on BOL's Gamewire too! I hope people get something out of the projects and make it even better. Just share that shibby back if you do and be sure to stop by again frequently, I will be updating my progress on Bushido Ito and terrain boards over the next few months here and on the GCT Forums. SHOCK: I'm Yeti's Yell on that forum.

Now, what do I spend the GCT pounds sterling voucher on?
EDIT: Polls closed, I ordered them all. Why chose?
Best,