1. Fix Your TIE Fighters: I gave a few wave 2 Core box sets as gifts, ordered from Amazon. One arrived with bent TIE fighters... and not whimsically bent.  I mean like high school wood shop class angles: not a straight 90 degree angle in sight. Weird and uncommon. I improvised a way to fix them for my brother-in-law on the spot, a giftee, when he opened that gift and saw their crooked, shabby selves in that black tray insert. The improv worked well so, I’m sharing that now. It may come in handy if this happened to you or your ships are left too long in a hot car, etc. This is all at your own risk. 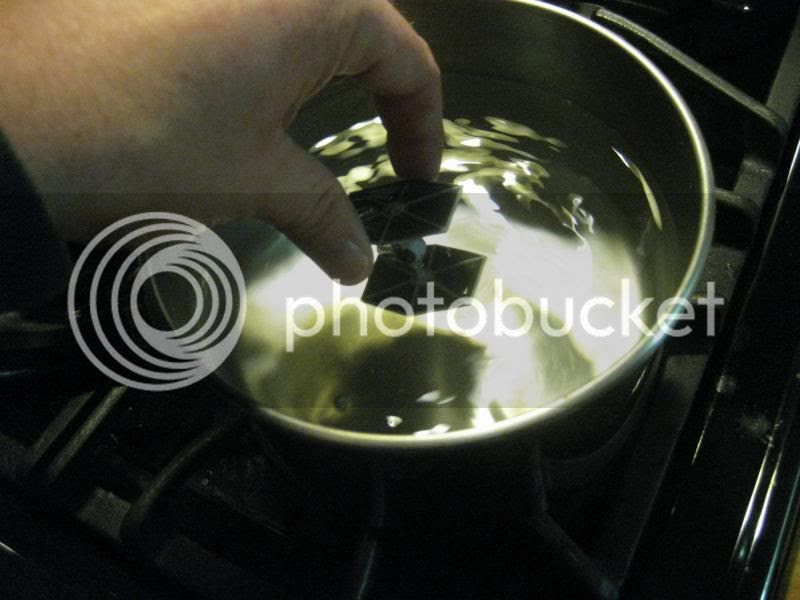 Get the water to a boil. Have the black tray insert within arm’s reach. Have one of the TIE storage slots filled with cool water. Use a large pot for boiling so the risk of you touching the sides is reduced. Take a TIE by the side and dip the bent wing in the hot water, covering the solar panel right up to the arm that connects to the cockpit. You should only need a second or two but you’ll have to judge. 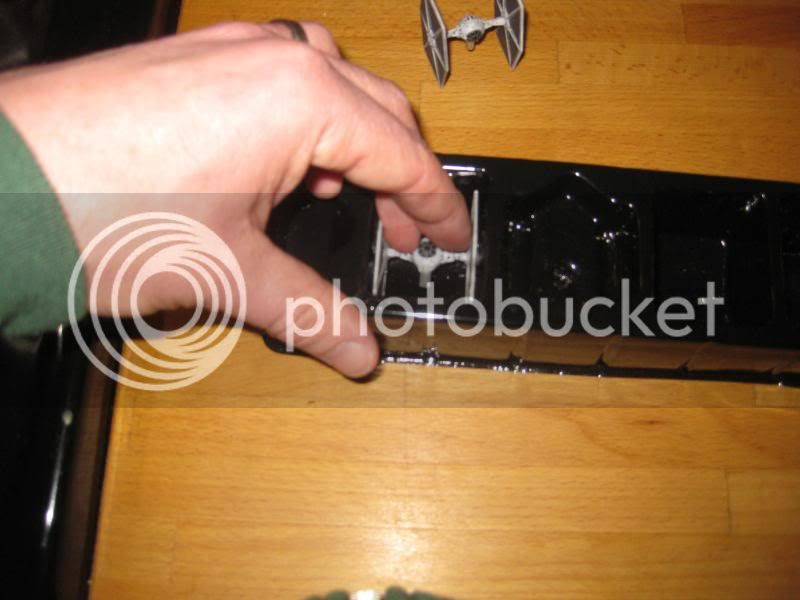 Take the heated TIE and GENTLY but firmly press it into the empty storage slot, using the shape of the slot to bend the wing back to square. You may need to reheat the wing a few times. Be sure to form the wing in this way and change the facing of the cockpit a few times; cockpit face out, face down, upside down. When it looks good you can put it in the slot filled with cool water to harden it and lock the straight wing in place.  Dry everything out and enjoy.
Granted, you could skip the above and just send the damn thing back but this did work and took 20 minutes to correct 2 fugly TIES. 2. Use a Laser Level for Checking Arcs: Look, SWXW isn’t crazy complicated but there have been times where using a laser level to see if another ship is in your arc is just drop-dead handy. This is something I relied on heavily in my Battlefleet Gothic days and it is still useful now. You can pick up a laser level at the tool store or DIY for US$10. It’s a luxury, not a necessity, but on play spaces bigger than 3’X3’ it saves your back by cutting down on reaching (I’m 41, screw you L5 vertebra) and at all times it can save you from having to slip a range ruler into tight model traffic, potentially bumping ships at a critical time, not that I've played such high-stakes SW that it really mattered. Still, if it is easy and affords a clear decision, it's good. Finally, if it is useful in SW, it's probably useful for other tabletop games you play.

3. Organize your Play Space: I get "gamer blindness" a lot; you know what that is, it is when you are holding up a game looking for info that is right in front of you and you don't see it. Consistent set up helps cure that. Consistent set up is the key to clean play. It's just science. If you set up your space the same way each time, you'll understand the variations your lists have from one game to the next and scanning your card space for info becomes way easier.

Here’s how I organize my cards in a game. It isn't perfect but maybe it will help you.

From lowest Pilot skill on the left to highest Pilot Skill on the right, lay out your pilot cards. That way, the Pilot cards follow the Activation phase and Combat Phase in order. Activations go from left to right. Shooting goes from right to left.

From here, organize the load-outs around each Pilot card.

The Pilot card is center. On the left of the Pilot card are any cards that “stay”, meaning cards that can’t usually be taken from the ship by expenditures, Critical Effects or Pilot Skills. On the Lower left are Damage cards. That way, I know any Actions I buy are on the left and Criticals/Abilities that affect them are noticeable. Directly below the Pilot card is anything expendable, like missiles, torps or one-use cards that you “cash in” like the Chewbacca crew card. On the right of the Pilot card are ship upgrades and shields. To the lower right are any tokens the pilot uses in that game. So, like knowing that the turn signal and horn are in the same place across different cars, I can speed up where to look. Finally, I flip over cards that you spend or cash in, or when Pilots are taken out, put the ship on that card.

That's it folks, some stuff I learned which I hope helps you out with your game of X Wing Miniatures. Have fun!
Posted by Yeti's Yell at 12:04 PM 2 comments:

What a Year for a New Year or FREEZING DEATH VORTEX of... DEATH? Yeah, DEATH!!!

Tomorrow the Polar Vortex arrives in Pennsylvania and I think scientists have emphatically stated that there will be no survivors. Or it will be really cold, inconvenient and Tuesday for everybody, not sure which yet. I bet it is somewhere in the middle of both.

In any event, now is a good time to assess what the hell I am doing with the time-sucking vortex that is our beloved hobby, since tomorrow will definitely be about hunkering in, trying to get some more painting done, some more started and maybe, just maybe... finally learning to love myself at the end of it all... (or the beginning?)


Speaking of loving myself: I picked up OGRE over the holiday and so, colored all cardboard edges of the punch-out models with colored Sharpies and then glued the pieces all together with matte finish Mod Podge, which is EXACTLY what the doctor ordered there. They came out great, look great. Great! That's a Pro Tip folks, no charge.

I have a ton of Khurasan 15mm on the way, alarmingly ordered before Christmas and yet I have not heard a peep from the company about it at all... but their website was intentionally down over the holiday for them to process orders, so I am not worried, so much as I just want that stuff so I can do 15mm Strange Aeons, where the Lurkers just became 100% bigger!

I also have some forlorn Khador on my desk that I am hell-bent on tackling, with a new sage green and red color scheme. Yes, this means I have been playing Warmachine again and why shouldn't I? It's a damn good game. Still, Star Wars X Wing is a damn good game too and there is no painting required.


Finally I have more Super Dungeon Explore to knock out, I dare say I am in the home stretch there on a completed box set.

What else? I have some IG to tend to soon and probably a miniature yard sale in my future in the Spring... too much stuff to tolerate.

Stay warm, stay safe and I'll see you on the other side!