The Imperial Fleet is about a week away from completion. I think the goal at this point is to get it table-worthy and then fuss about details like engine glow later. I know for a fact that Santa is bringing me Assault Boats, Chaos bombers and enough 2" bases to mount the lot. I aim to get the Assault Boats done next week as well.

Still left to do on the Mars Class pictured here is a wash of GW Ice Blue + Flow Enhancer, to make the GW Mithril Silver metals colder than they look now, giving them some pop. Also, I'm going to try to paint arcs onto the bases to clean up gameplay.

An interesting note about this ship: Somebody else had built it in a configuration that I don't see anywhere in any BFG resource. It was the last Imp ship I had in my big box of BFG after assembling the rest of this fleet. During my attempts to remove the errant weapon bays I had pretty much destroyed most of the ship, including breaking off the prow. I wanted a Mars class and that is a unique vessel, so I decided it was appropriate to embellish the reassembly of this ship with Imperial Guard icon bits, a battering ram assembly, WHFB Skeleton skull, putty, cutting and reattaching/trimming while getting it all back together again in its traditional shape, plus improvements.

So, the worst looking hulk in the fleet is now the flagship. 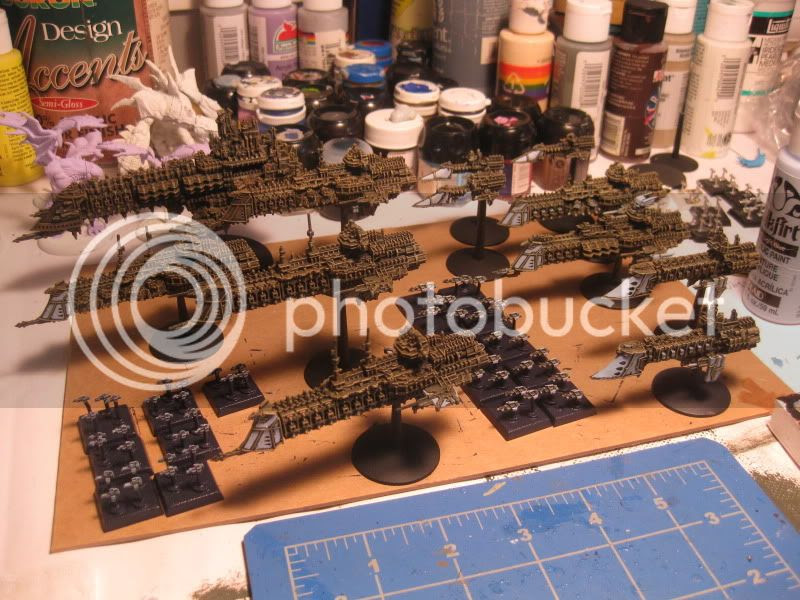 At least the fighters and bombers are done...

Here's a WIP shot of my "new" Imperial Navy fleet for BFG. I say "new" because we all know how old these models are. I inherited them from my buddy Wil who gave up the BFG ghost and so passed a mighty box of models my way. I parsed out the box amongst friends, including some Space Marine ships to Joe over at Rocketship Games. Since then, I've been painting steadily, building up a very large fleet for Chaos, a starter fleet for Eldar and now a decent-sized one for the Imperials. The only thing I added on my own to this Imperial Fleet was the Emperor class battleship. I intend on painting hash marks onto the bases for arcs, something I've been doing with Warmachine from the start so here's hoping I can pull that off here.

I have a game of BFG in January against the local guru's Ork fleet, so I want to have this fully painted before the end of the holidays, just so it looks great when he cleaves my fleet into spinning, shredded debris fields.

When the fleet is done I'll post up a color list/process.
Posted by Yeti's Yell at 11:51 AM 2 comments: