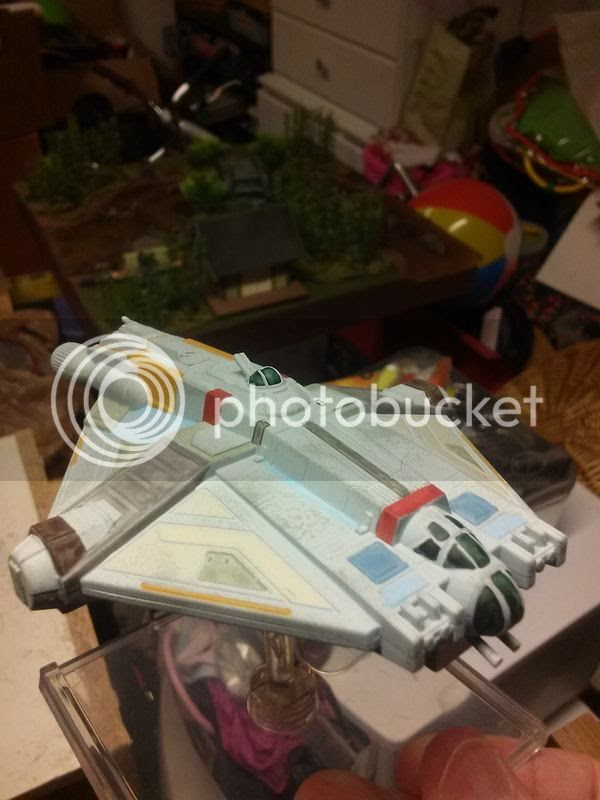 I've had this on the paint bench for far too long. I got this cake topper for my son then got discouraged by the wrong base color. And it sat. Well, the boy asked for the Ghost again so with no delay I re-based in OOP GW Space Wolf Grey and made with the painting. This thing was like US$8 bucks, so not expecting much but the lack of detail is daunting. The canopy is a real test but so far it's passable.

Now I am at an impasse. I mixed the colors based on source pictured and generally nailed it but the question is now one of finishing. There is some yellow stripe and detail painting that needs doing but really it comes down to hard lining: do I use technical pen or something brush-based like Nuln oil which won't be as harsh? Hard to tell really, looking at the source material you would to try to keep contrasts lower than how FFG would finish the model. But this will roll alongside other FFG models so I guess get with the idea that contrast will join it. Stay tuned for the finishing.
Posted by Yeti's Yell at 11:20 AM No comments: 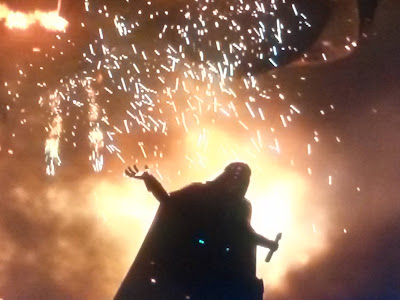 I won't be making Rebels part of the fabric of the blog often but I am compelled to say that episode 1 of Rebels season 2, The Siege of Lothal,  was the most exciting Star Wars-anything I have seen in a long time. They took serious notes from movie Episodes 4-6 in terms of visual styles and aesthetics and I appreciated the hell out of it.

Being a McQuarrie fan since childhood, I see so much of his handiwork embodied in Rebels, from Lothal itself to the profile of Vader's mask and while I have enjoyed how Disney deployed his conceptualization from the beginning, something really congealed in this episode, really pulled together his signature influence and the classic Star Wars look from A New Hope onwards. Visually, it was more Star Wars than I though a cartoon could get, in due part to the "classic" look of everything on screen (no offense Clone Wars) but also the spotlight on Vader and how the universe "felt right." GOOD lightsaber fights, A-Wings, CR90's lumbering around, Imperial scapegoats... and Vader. Such Vader. Wow.

Season one was a bit childish and weak (even my 11 year old says so) but it is desirably dark now and feels so Star Warsy it has me scrambling to play Imperial Assault and X Wing (well played Disney).

If you haven't watched the series until now then you could simply jump into this episode and maybe feel thrills you forgot you once had, even without all of the back story there. Those with the Lucas-trope gene will know how to fill gaps in motives but if you had a choice I would say watch Season 1 first.

You may be surprised at how into it you get. Either way, enjoy!
Posted by Yeti's Yell at 9:46 AM No comments: 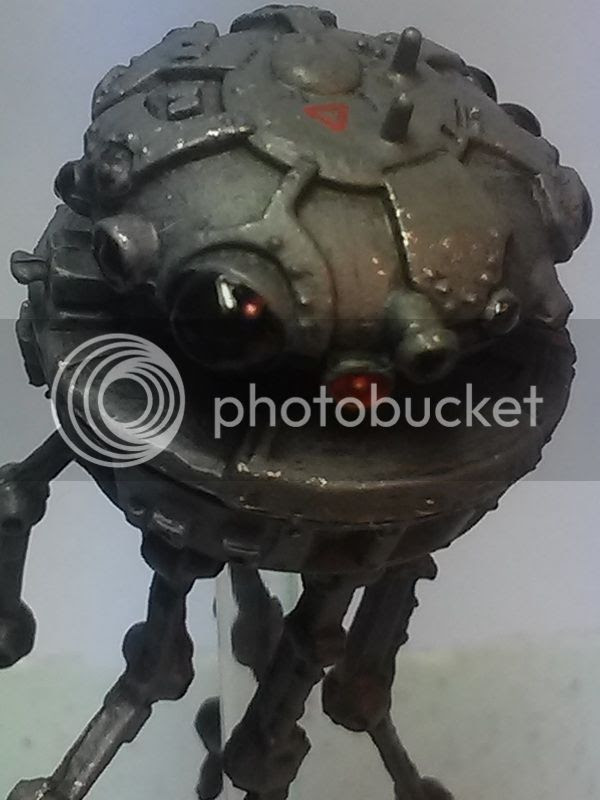 Imperial Assault is a blast and despite my efforts to resist, I started painting the minis for the game. It's a catch 22. Some of these figures are made for painting and some are not. And this is a big social game for me. Plenty of people will be handling the figs, it won't just be me, so wear and tear is huge on my mind. But once you paint the figs that call out to you, well, it becomes really obvious that some are painted and some are not. Sigh. So much for building and painting Robotech in June. 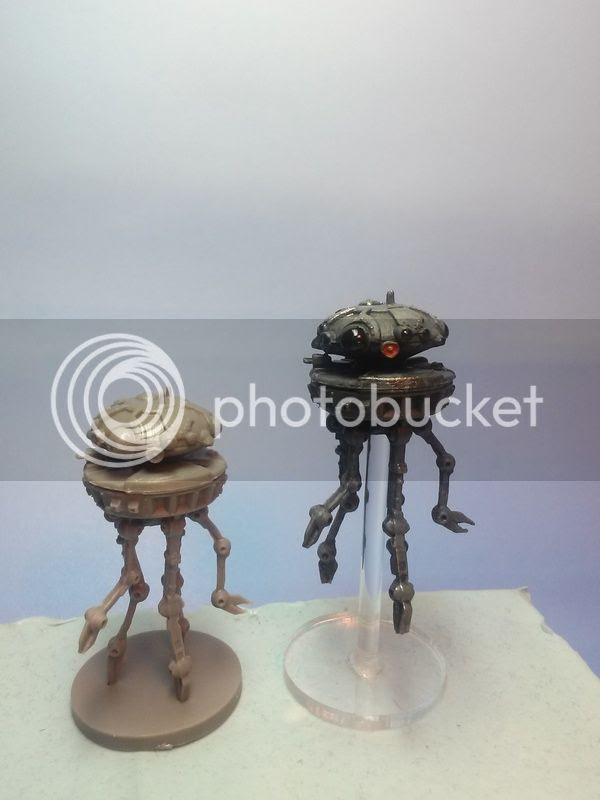 I ordered some clear bases and rod from Litko for rebasing. I have been wanting to try my hand at clear bases since I saw someone do it for Mansions of Madness. I really wanted to do it for Robotech but I see a few issues with that and since the terrain on the tiles in Imperial Assault vary (and will continue to do so in the future) this seems like a good time for bases that blend. So I removed the droids from their bases (which was alarmingly easy), tapped a hole in the droid, taped a hole in a base and cut 3 rods at varying height. I used Litko's non-fogging clear cement for the flying bases and while tricky to use, it worked well, even had some surprising gap-filling qualities. The paint was straightforward and simple. I messed with OSL on lenses but there is some rough, non convex surfaces on some sensors/lenses so in the end I elected to paint them black and top coated with Tamiya Smoke for a great gloss effect.

I would be really surprised if I painted the whole box set but I have to admit that painting up classic heroes and villains is probably something I've been subconsciously waiting to do my whole life... 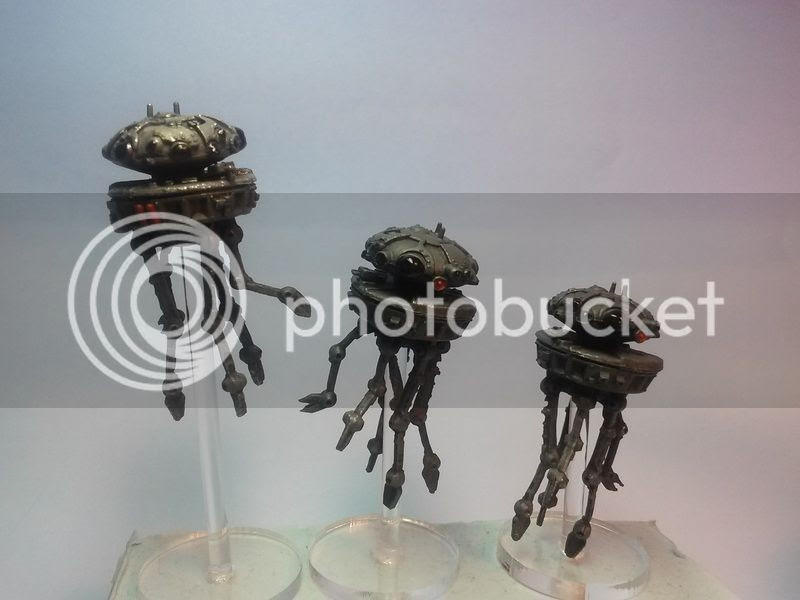