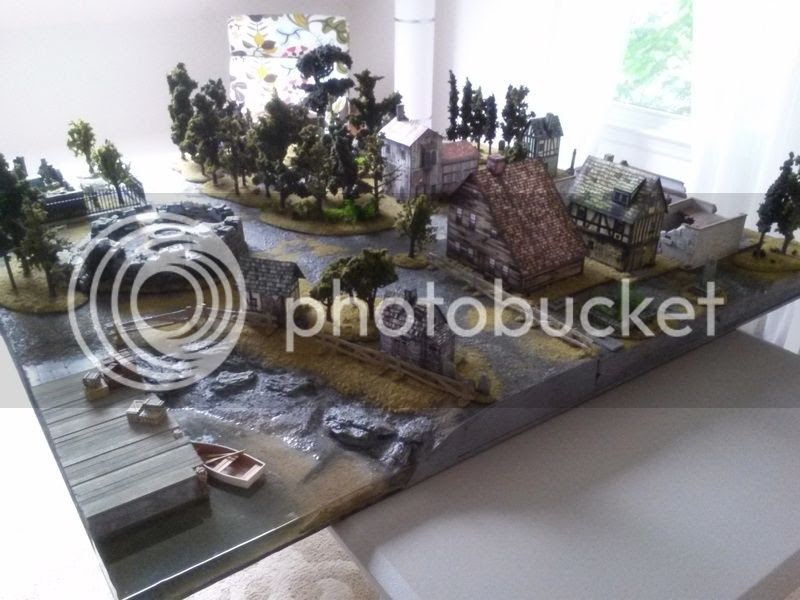 Editor's Notes: I took some liberty with some of the mission parameters of the Treasure Hunt scenario and game rules since this was a learning game for my 11 year old son Nate. I just encouraged him to play in character and do what seems cool and cinematic, which is how 11 year olds basically live life anyway.

For instance, I wanted him to be able to explore the whole board, so he needed to drive the truck around. Since there are no vehicles rules in Strange Aeons yet, I made my own:

Truck: Driving a truck doubles movement. If the truck enters or touches any terrain features, take a Dexterity test. Failed tests=immobilized. Up to 3 models may ride in the truck. 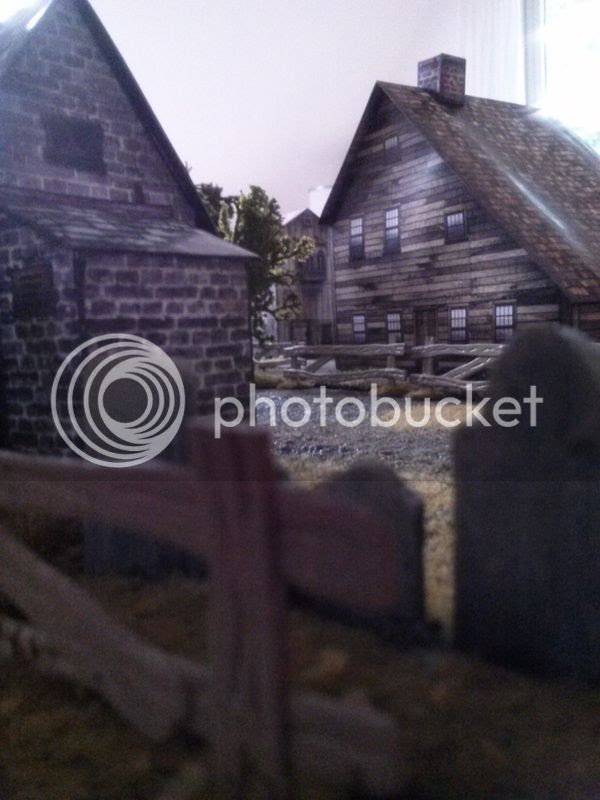 Other modifications to the rules were all buildings are Hideous, which forces an Insanity check upon entering a door or window. I did not make fixed turns, only that he had to make 4 discoveries during the game, meaning Threshold needed to find four objects by searching any terrain feature (one discovery per feature) and then escaping off any board edge. Lurkers needed to kill all Threshold agents. 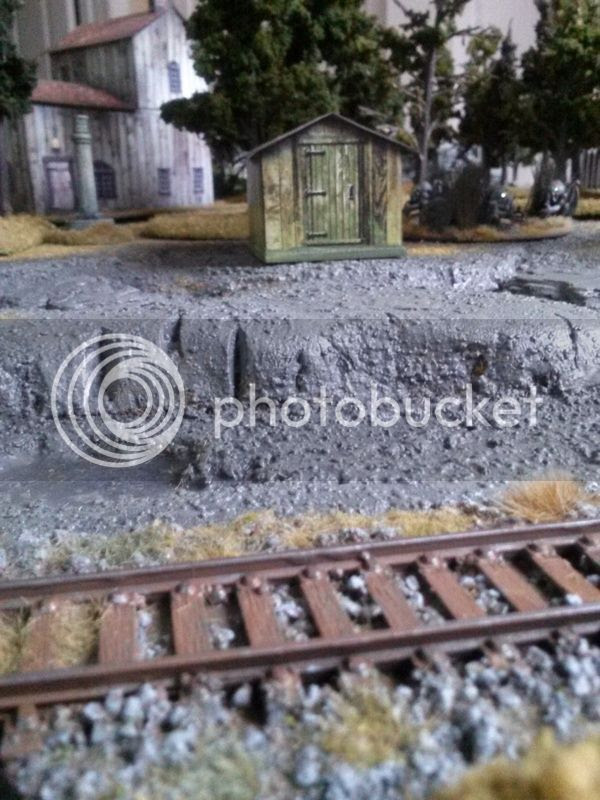 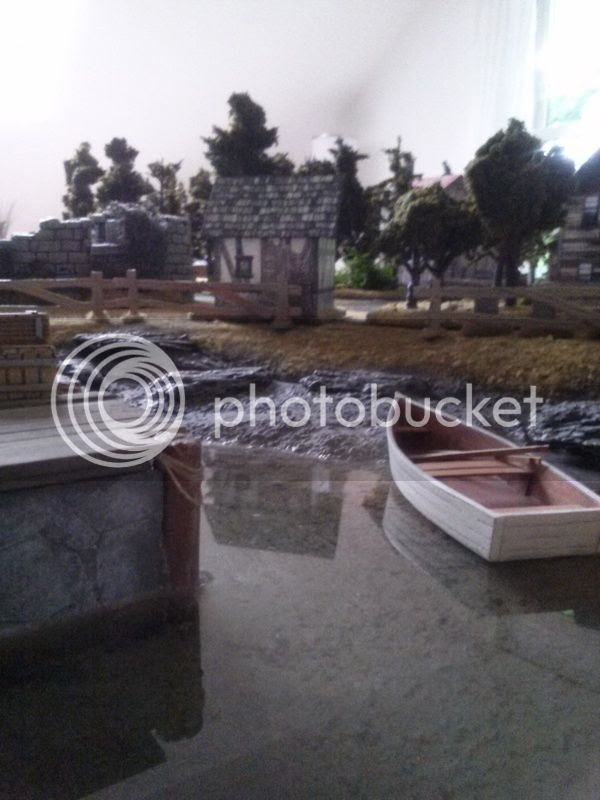 Nate elected to come on the main street into town, instead of the railroad or water (which was smart.) From that deployment I mentally found the 2'x3' boarder and set up my Lurkers in secret opposite his force. I wrote down the location of my Mad Scientist and Zombies and allowed them to be triggered to activation on turn 3 or when an Agent would have LOS to their location beforehand.

I also used the Treasure Hunt Treasure Table for the first few discoveries then switched to the Body Snatchers table so there was a chance he didn't find anything and it would create suspense (which it did!)

As it was, this was a great learning mode for Nate and created a thrilling story. Finally, note that Agent Dark Cloud is a Mad Scientist by cost and profile though in the story he is a Rogue Threshold Agent. This swap was purely for the narrative. 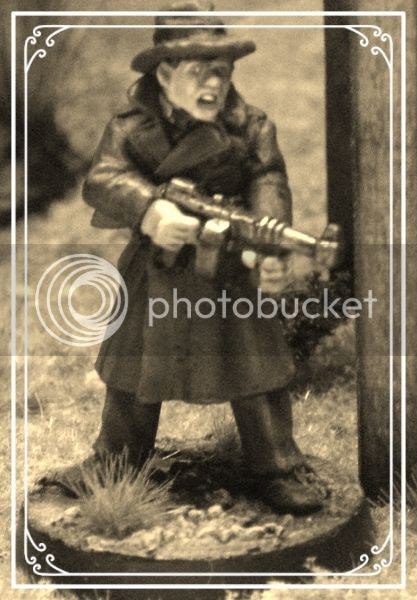 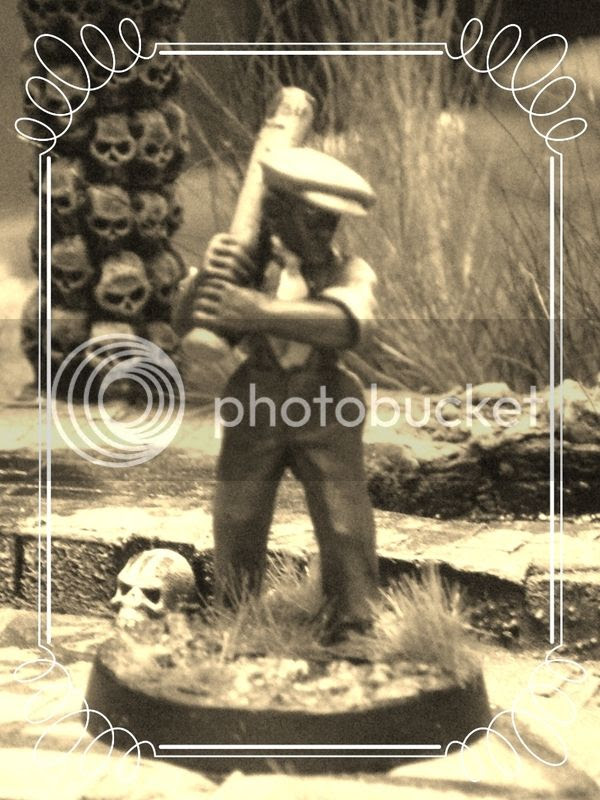 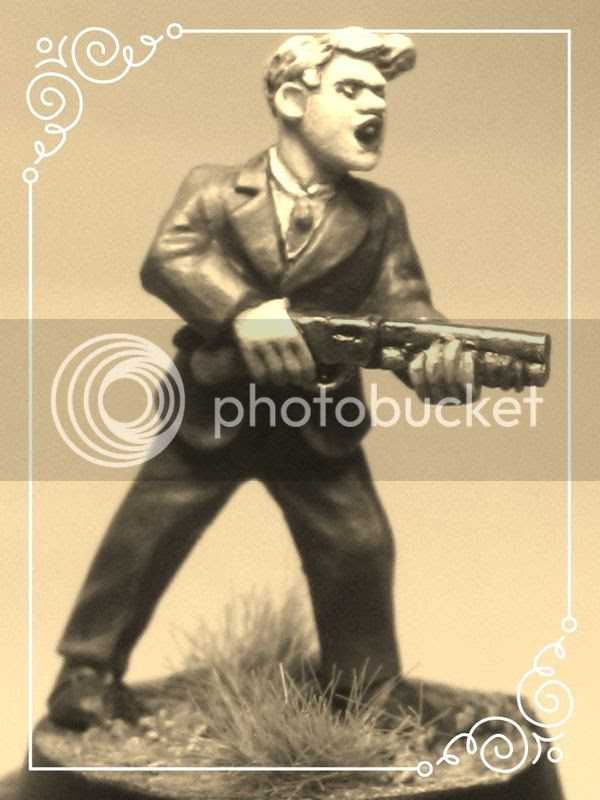 Agent Dark Cloud and the Prior Residents of Sunset Lake, PA 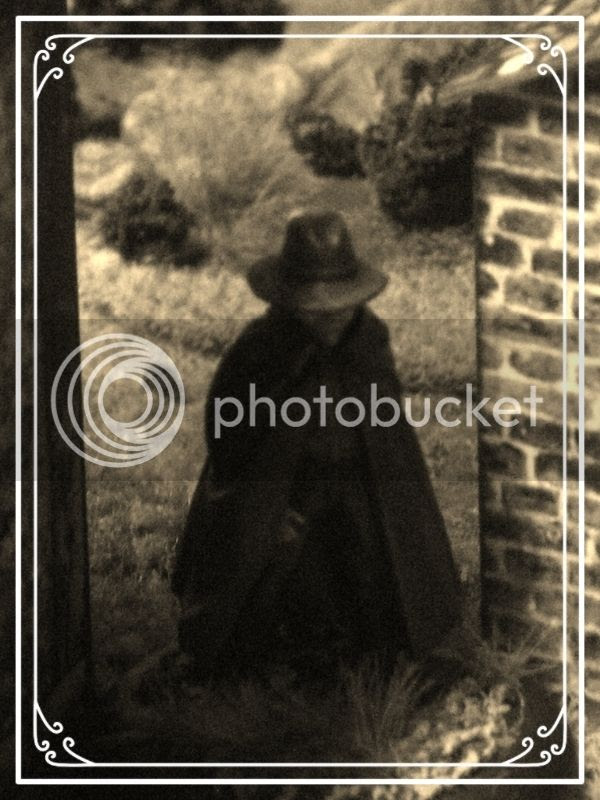 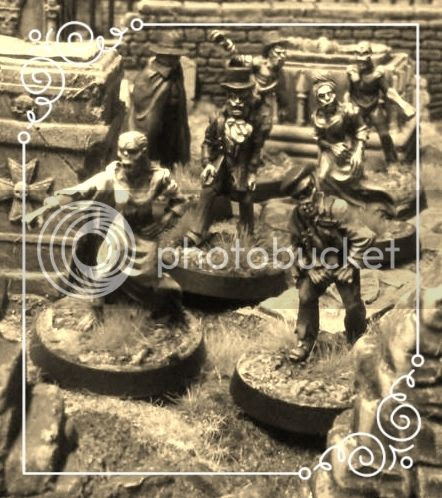 Five Zombies, Tough and Jump Up skills, Undead and Hideous

Engine running, the Threshold left the van at the curb and entered the hostel, the last place a telephone call came out of the town, turning up their first successful discovery, a bloody map with hasty notes jotted down upon them near the operator switchboard. They searched adjacent buildings for a few turns unimpeded as the sun set and moon shone pale above the wooded lake (and they passed all Fear checks for the spookiness thanks to Agent Petri’s Command skill and Resolve.) 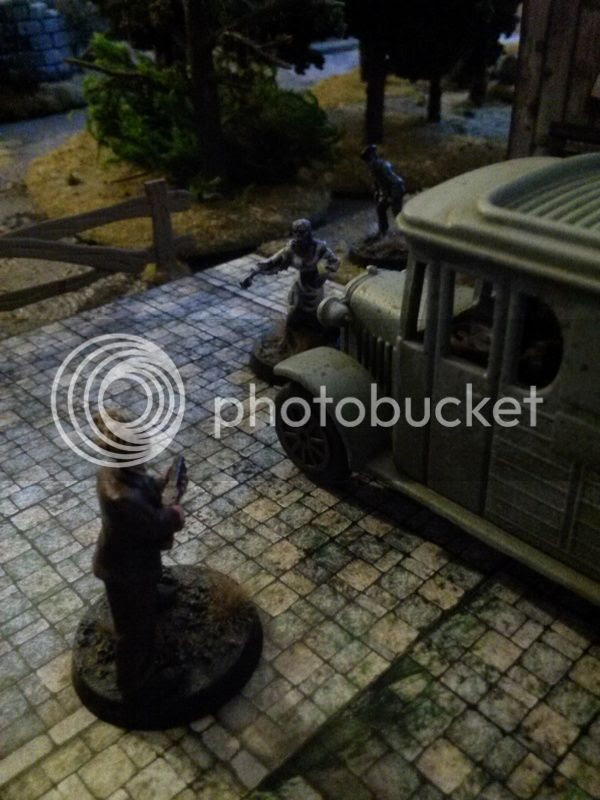 Upon hearing Morse’s shouts and panic fire, Agent DeVille came out of the front door and charged the zombie which was attacking Morse, immune to the terror of the dead thing (Insanity test passed), swinging his lead-filled baseball bat at its head, twisting the old woman’s skull with a sickening crack. 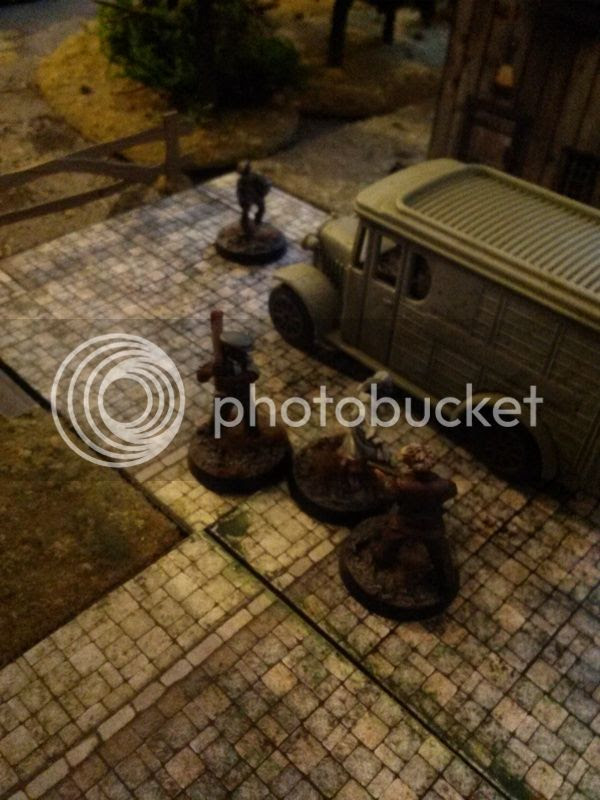 The zombie was knocked down but managed to lurch up and clamp her septic mouth on DeVille's arm as he tried to finish her off. Falling to the ground clutching his arm, he passed out (Major Injury.) Agent Morse passed his Insanity test (using Petri's Resolve due to Command and Inspire skills) for seeing his comrade taken down and he continued to fight with the gory zombie as the other one closed in. Agent Petri was inside the house, still searching and did not have LOS and so, was spared the sight (and Insanity test though he was likely to pass, also for being Alone in the dark house.)

Agent Morse was in a deadlock with the undead woman, yelling for help when dread started taking its toll as the unbearable smell almost overwhelmed him, his grip on his shotgun slipping from the bloody maw of the zombie chewing the shotgun receiver held squarely by Morse in its mouth like a champ bit. Morse looked sideways at the second zombie now moving next to them which seemed to awaken from a fugue and surge towards the combat… 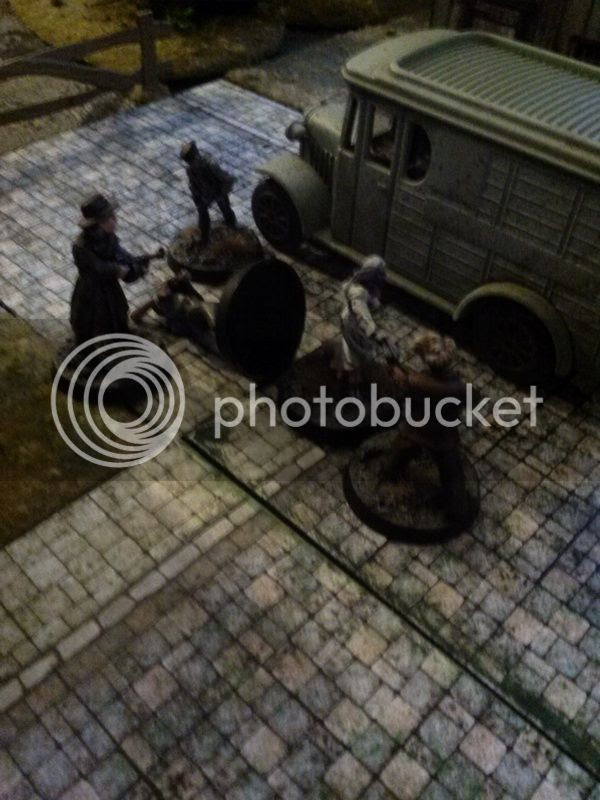 Suddenly Agent Petri bounded out of the house, shredding the closing zombie with his chattering Thompson machine gun, a found scroll in hand, then ran (Charged) into the fight with Morse, drawing a large meat cleaver from his belt as he shouldered the rotting thing sideways. Together, Petri and Morse managed to put her down, piece by piece. Agent Petri looked at the prone DeVille, then Morse and he slowly shook his head as the Agent lay there, weakly rasping.

The rogue Threshold agent codenamed Dark Cloud stood atop the slabs of the ruins, which glistened in the climbing moonlight with runic spirals of coagulated blood. The agent impassively injected two of the zombies next to him with a large veterinary syringe full of glowing reactant, one shuddering and gaining some degree of vigor (Constitution and Movement boost) while the other, nothing but a popping gasp out of its kinked, fetid throat (No Effect.) With a gesture from Dark Cloud, the zombies walked right off the sheer walls to crumple on the ground below with wet thuds (3" down) , only to somehow stand up again and start lurching towards the agents (both zombies did not take Fall damage and were able to change their states from the automatic Face Up penalties from falling, to Standing, due to Jump Up traits.) 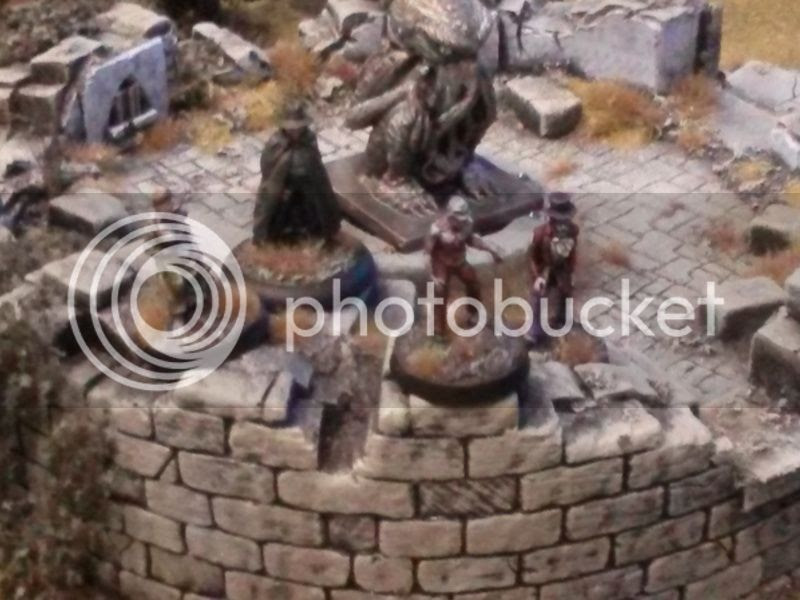 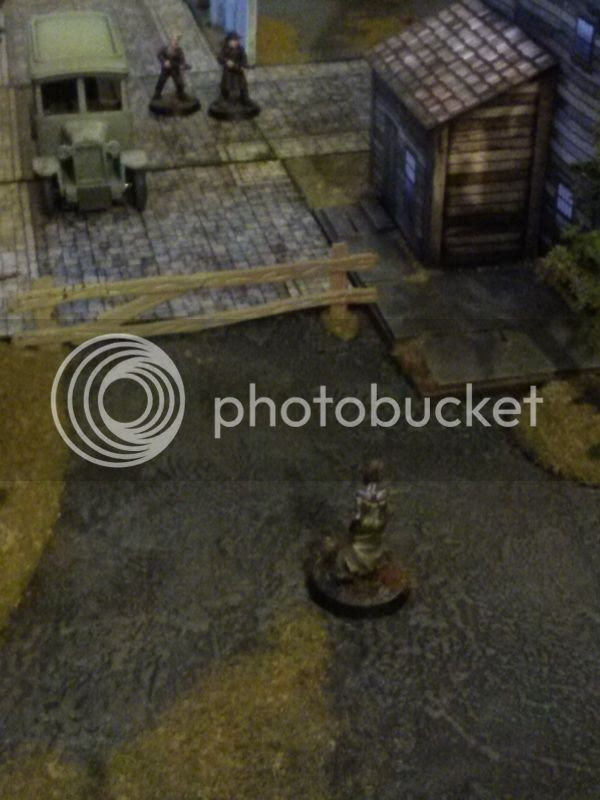 Petri yelled to Morse to keep searching and the two
ducked down an alley as the zombies came down the gravel road towards them. The air was rising with stink and a sound like sailcloth flapping in a breeze, though the air was still. 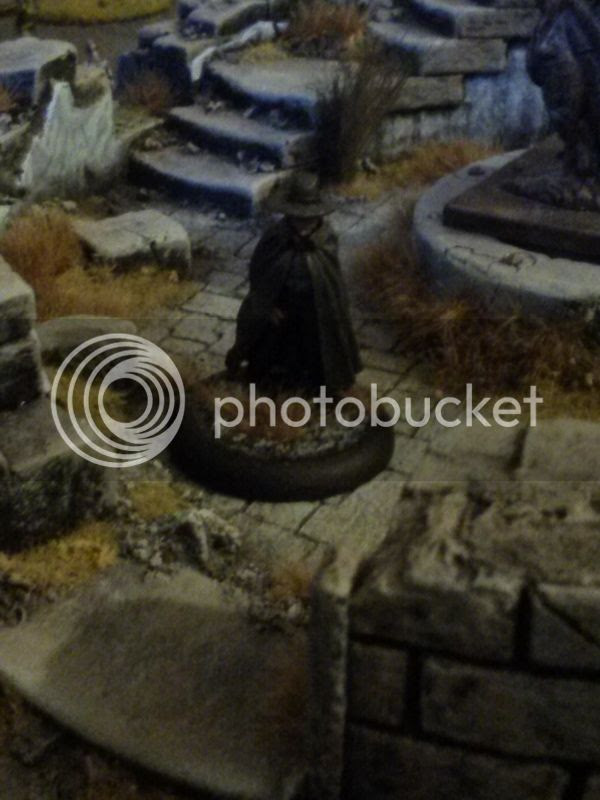 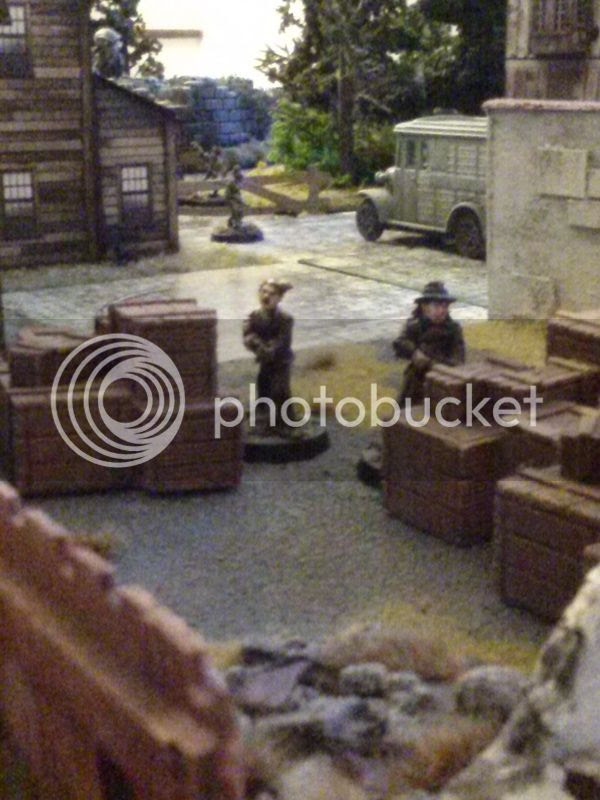 Dark Cloud sent his last zombie over the side of the lighthouse but it hit the ground awkwardly and split its skull, ending its unholy motions. He then walked indifferently down the staircase towards the Threshold agents, who were now out of sight, busy searching the perplexing pile of crates discovered in a davenport next to the vacant hotel, a third discovery, a manifest (scroll.) Petri noted the Threshold sigil on the sides of the crates but there was no time for a photograph and he lacked dynamite. He did not see what they were but he had a sick feeling in his gut about his hunch. 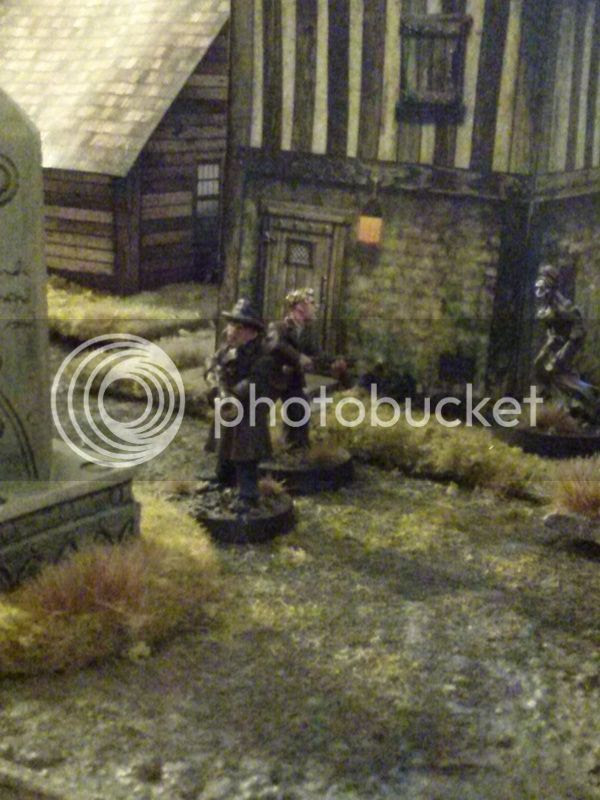 The zombie that Dark Cloud's reactant made more vigorous manically caught up to the Threshold agents, Morse fired from the hip and splintered clapboard siding along with the zombie’s shoulder as the corpse came around the corner, stumbling. The zombie was just out of arms reach (1” from BTB at the end of the random move rate), the so Threshold ran out of the alley, through the back yard of the davenport, searching madly and finding a fourth and final discovery, a Ring of Power on a rock next to neatly folded clothes and shoes in the grass (though not knowing what the ring was or how to use it.) 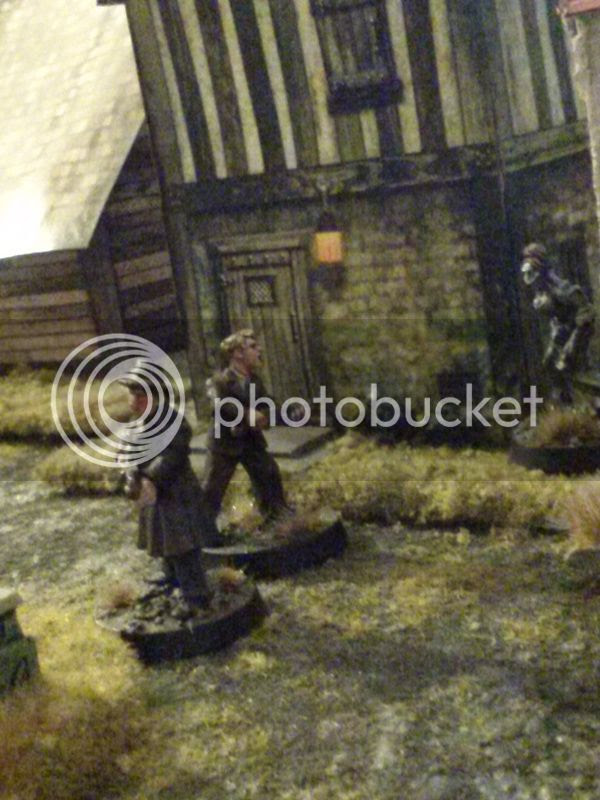 The zombie Charged, again coming within inches of catching them (less than 1” short of BTB after Random move rate and another Insanity check for Hideous) but this time Morse calmed himself, took a few precious seconds to dump his double aught round and chamber a slug round, compose his aim (forfeiting one Action to use his Accurate skill for his second Action, shooting his shotgun with a Dex boost of +1) and he hit the gibbering thing square in the chest, sending it splayed backwards (3” away , due to Power) and landed face down on the paving stones, a singed hole gaping through its burial dress. 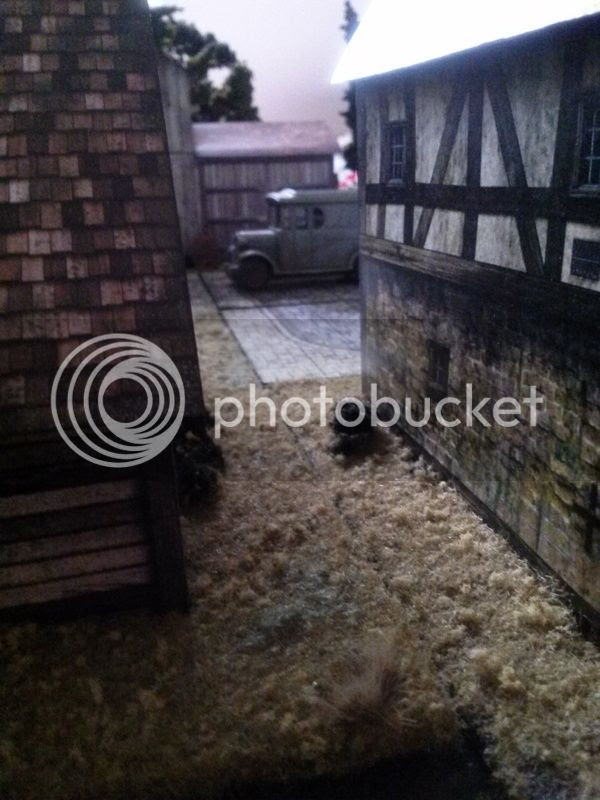 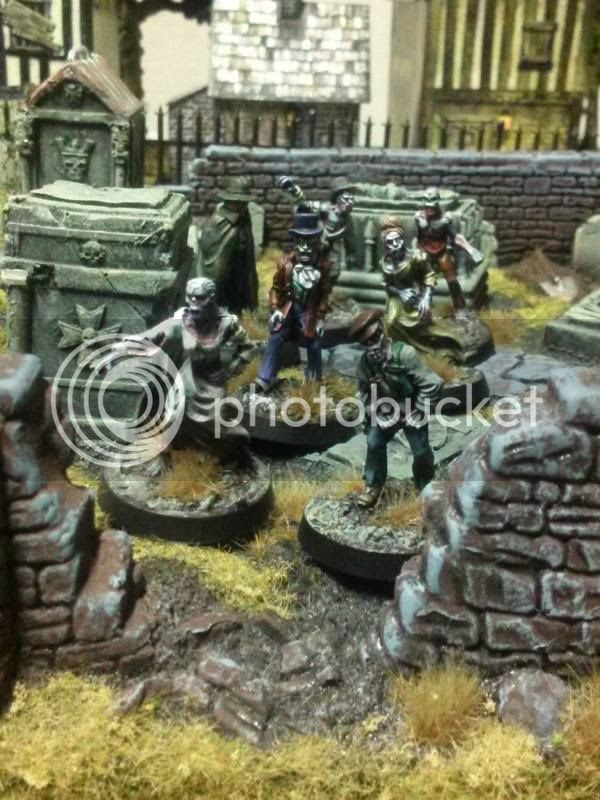 The agents looked up to the main street where their idling truck remained, and didn't see DeVille where they left him... and the streets were teeming with undead. Dark Cloud stared at the 2 remaining Agents as he advanced, a still island amid a roaring undead stream washing towards them. Finding a scroll in the grass next to a town monument in the yard, Petri grabbed Morse by the collar and they ducked into the dark woods on foot, leaving DeVille and their truck to the now-occupied town of death.

Only as the Rhododendron wipped past his cheeks as he sped through the mossy, rocky undercanopy did Petri realize that this was a trap. One sprung by Agent Darkcloud himself. Petri pulled the panicking Agent Morse down a cut to the fire road and to eventual safety.

Threshold won! Nate was extremely happy to have 2 scrolls, a map piece and a Ring of Power. Agent Petri gets a free Skill advancement (TBD) and Morse got one too, electing to take his Dexterity from 5 to 4; this makes the Accurate skill great for him, as aiming can make his powerful Mossberg hit on a 3+ for one Action or 4+ without aiming! At 6" or less, this is great for getting some breathing room.

Unfortunately, Agent DeVille perished at Sunset Lake... though that does not mean he is resting in peace...

Until the stars are right again! 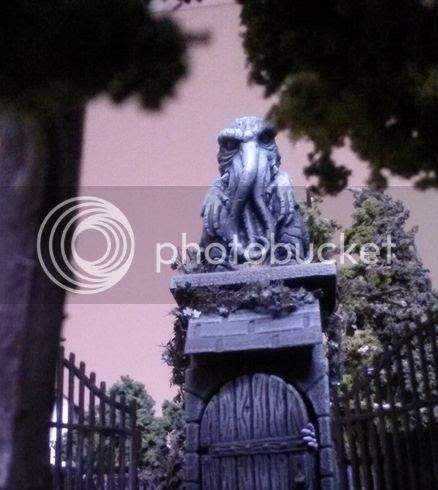