I'm still toying with doing a Space Wolf force or, perhaps better, bring this relic to my aging Plague Marine force where it would look fantastic with the old Nurgle models. The high school junior in me just squeeed, recalling the days of plastic Land Raider kits and unstoppable rage (mine from high school, not the land raider's).

I really like the experimental rules. I'm not sure about the points cost but the features it brings are... interesting. I "play" guard so I'm aware of what the Master of the Fleet and Astropath do to enemy plans. Proteus does the same. Proteus also dislikes melta spam and just feels like the precious WOPR from ages past. It might not be a total detriment to putting down on the table just because it looks so damn cool.

So what do you marine players think?
Posted by Yeti's Yell at 9:34 AM 4 comments:

Email ThisBlogThis!Share to TwitterShare to FacebookShare to Pinterest
Labels: 40K, Chaos, Hope for the Future, Nurgle


Finn and I had a casual BFG game Friday night, acting out a chance detection of a Chaos reconnaissance fleet and a picket of  Imperial warships. The game was started late and so we called it on turn 5 (out of proscribed 8) around 1 AM. It was still a blast, literally.


There were 4 Celestial Phenomena in the Flare Zone of Hammerfall’s inner solar system and we had to roll for 2 solar flares in each of our turns as well. Phenomena played no role in this game, save for the Chaos Devastation cruiser prowling the shallows of The Nochsi gas giant, intending to descend into the immense gas cloud if cornered, where the loss of shields and disruption to reactor containment was preferable to standing up to Imperial broadsides.

﻿
Turn 1 and 2: The Imperial cruiser picket moved into a chevron formation  and closed on the intruders, firing Nova Cannons as Chaos shifted to allow the Carnage to skirt towards The Nochsi Giant with the Devastator behind. The 2 Slaughter cruisers drifted together on minimal power, undetected by the Imperial fleet, ready to crash-start and speed 30cm a turn towards the Imperials once the Carnage gains the Imperial left flank.

The Imperial Nova barrage was long, but the Imperial gunners recomputed trajectories based on telemetry while hundreds of ratings hauled massive nova shells into cavernous cannons again. The Chaos Devastator launched 4 waves of fighters to patrol for Imperial torpedoes as auspex on both sides monitored the sun, watchful of dangerous solar flares. The surprise arrival of an Imperial LRRP asset hailed the fleet as it came around from the asteroid belt outlying the sector. The 2 swords and lone Cobra moved expertly amongst the outlying fields of rock and into formation with the Imperial fleet. 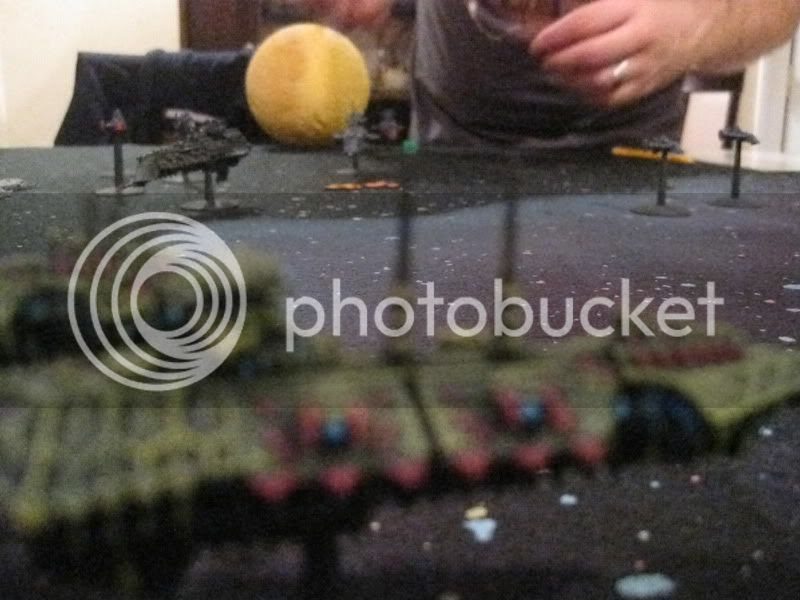 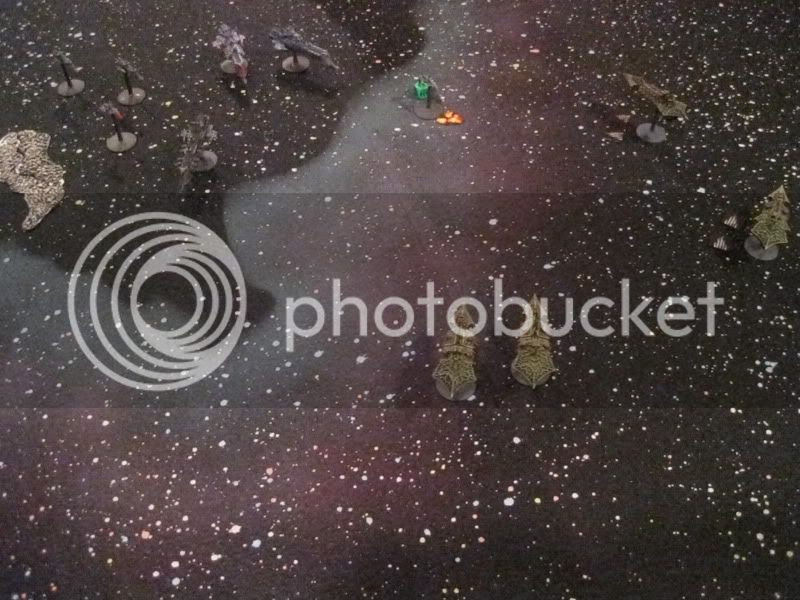 Turn 3 and 4: The Imperials split into a pincer formation, as the ordered Swords and Cobras broke station from the thrumming wakes of their convoy out into the void between the fleets. Nuclear lance projectors stitched back and forth, flaring shields and slicing hulls asunder. Weapon batteries miles long flared along ship hulls as savage ordinance streaked out and detonated against energy fields that could not withstand the megaton concussions. A Slaughter was detected by Imperial Fury interceptors that had been launched and reported directly back to the Imperial Gothic class. Coming about in sprays of attitude thrusters, power levels spiked as the veins of energy and ammunition coursed into batteries which bombarded the Chaos ship. The Captain of Slaughter 1 sacrificed crewmen to Father Nurgle, who gave him warp sight enough to know to order the helm to blast port thrusters and adjust their aspect to the Imperial shots and receive the Imperial barrage spread from stem-to-stern instead of concentrated into one already molten, gaping wound.

In textbook synchronization, building-sized missiles were launched towards the struggling Slaughter from the Imperial Dominator cruiser, which were met and destroyed by lurking squadrons of Swiftdeath torpedo-hunting fighters.

Chaos lances illuminated streaking Imperial nova shells that plowed through molten metal that had ejected from impacts along the Slaughter’s hull and then cooled into tumbling, hill-sized parodies of coral. Below deck in the putrid bowels of the stricken Slaughter, hundreds of diseased crewmen perished as atmosphere ignited within compartments or sections of ship breathed them out into the frozen, crushing void when a Nova shell crumpled the port thruster stack of Slaughter 1. 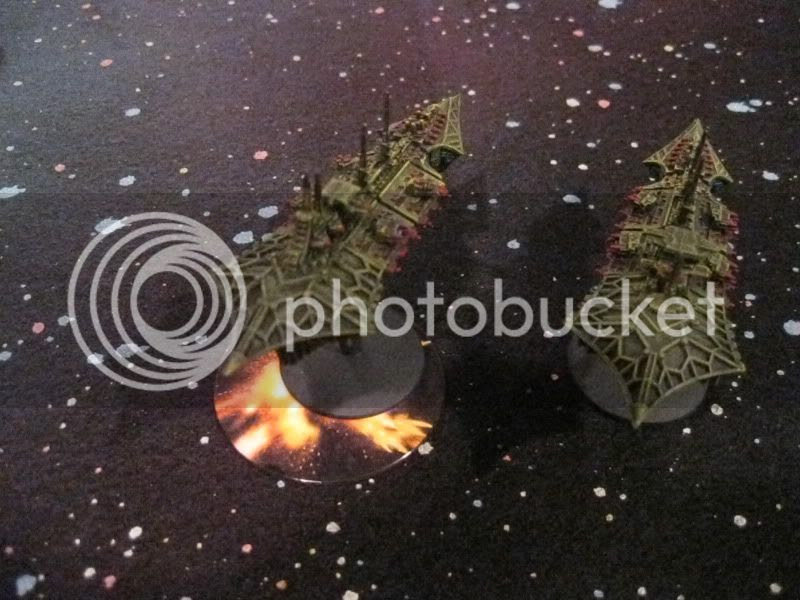 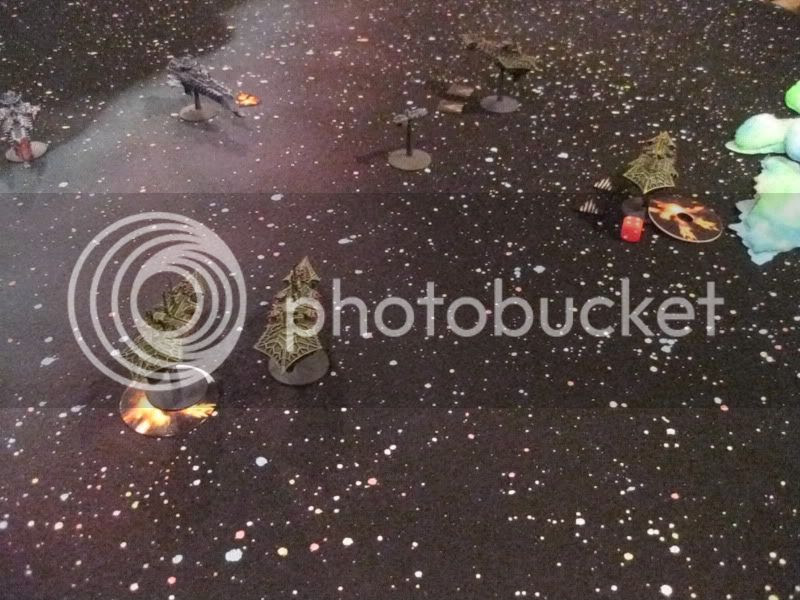 Turn 5: The Chaos Carnage came amidships of the Imperial Line as their aft watch reported a massive Nova detonation against the trailing Devastator. Communication had been lost with Slaughter 1 while Slaughter 2 was ordered all ahead full to no avail. Starboard compensators flared as the Carnage’s port batteries and lances filled the void around the incoming Cobras with such incandescence that even their pierced and stabbed reactors breaking free from containment fields seemed but a spark amongst the bonfire of the disintegrating Cobra squadron. The Imperial Gothic shuddered as her shields flickered through the bands of explosive forces dealt long range by the Carnage cruiser. 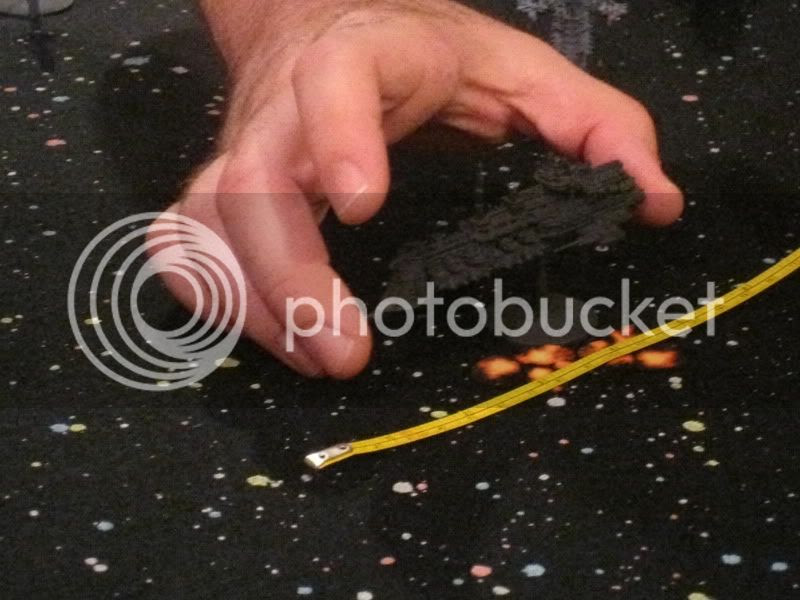 With launch bays still open and issuing fighter waves, a Nova cannon shot detonated with such close proximity to the Chaos Devastator that the Nova’s plasma wave carried just-launched craft back into the hangers like twigs carried on floodwater, to immolate in the estuary line between void and oxygen-filled holds, which burned from the inside out.

The Imperial commander called for reports as the Chaos fleet seemed to go dim and dissolve from his command lectern screens, indicating disengagement. Gunnery sections confirmed the Chaos contacts changing from hard to intermittent to silent. Damage reports streamed in from the fleet and the commander ordered the vanguard section into a Search turn towards the last position of the Carnage, leaving the bloodied Devastator for the mysteries of the enshrouding Nochsi gas giant which swallowed the cruiser whole. The limping Slaughter 1 was savored by the green gunnery crews of the Imperial Dominator to cut their teeth on instead of being taken as a prize.

Notes: Neither of us had used Nova cannons before so the what-fors and how-to’s took some time. Also, neither of us thought to take a true fleet commander with inherent Leadership and reroll. Given more time, I am sure my flanking Chaos fleet would have maneuvered around hard enough to cross the T of at least one Imperial cruiser but the Nova cannons had already found their range and it would be an attritional fight, perhaps helped by my now-triggered Blood Bond. I was disappointed that there were no solar flares all game... it would have been cool to see the havoc they would have caused and possibly the mess created between the tension of Imperial and Chaos fighter waves on the board. Finally, I had forgotten a major Special Order, Brace for Impact. I can only chalk my failure to use that up to the late (and great) night.

Terrain How-To or Talkin’ Trash: Defense Line on the Cheap, Part One 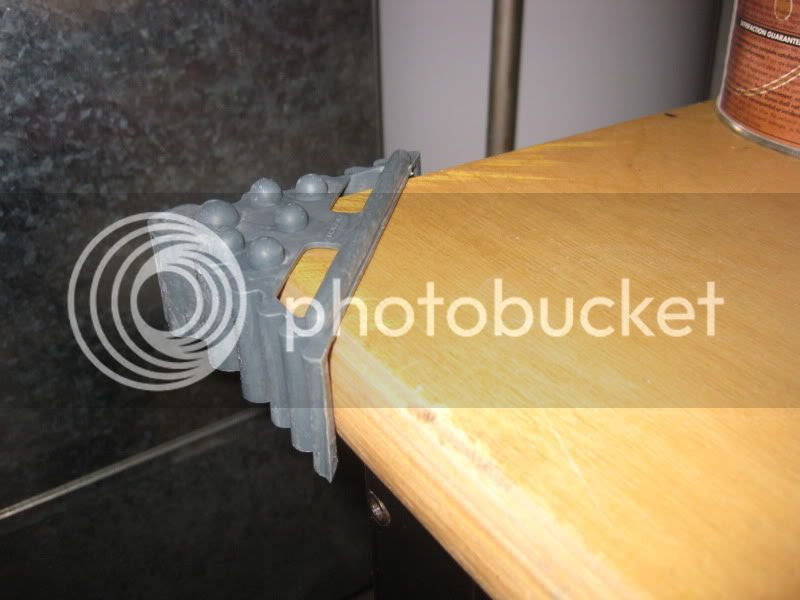 Goal: So I got a new office at work. With the new office came new furniture and with that, these plastic corner guards, protection for the furniture in transit. As soon as I saw them I grabbed as many as I could, eleven in fact. They seemed a good scale and possibly workable as far as material goes, so let’s learn together and see if I can make these things into a group of chevron bunkers. I only wanted to spend about 20 bucks and counted on the other materials I already owned to bring this thing home. 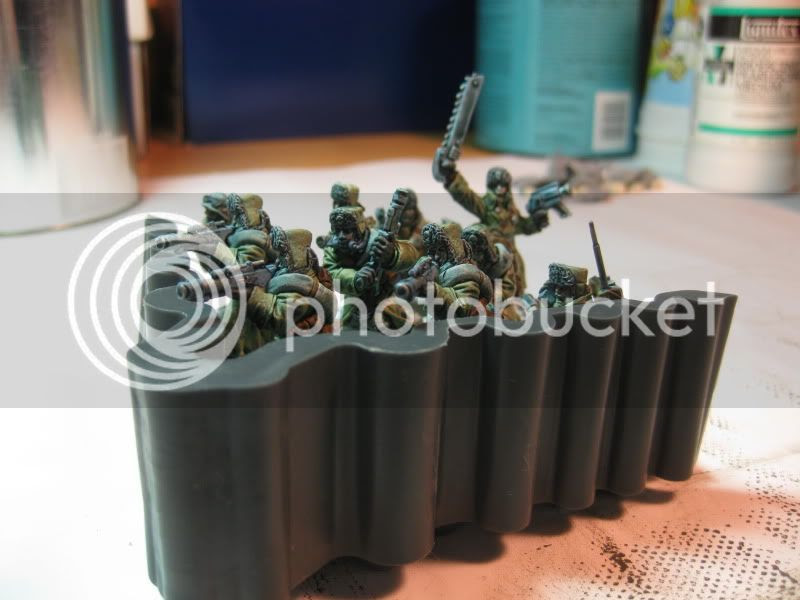 ﻿
Style: Here you can see that each of these can hold almost a 10 man squad. With a 3"x3" piece of foamcore in it, the bunker holds about 8 or 9, 2" GW based models. Good enough. Without the foamcore "floor", the head of your average GW trooper won't see over the lip. With foamcore, it does. I wrangled with how to tackle this LOS issue and felt that the floor, which elevates the troopers, is better for LOS and more dramatic-looking. I like what these corner guards convey as bunkers, the rounded sides would be a good design for deflecting rounds and would look ok both in 40k and Warmachine, 2 games I play.
﻿﻿﻿﻿﻿﻿﻿﻿﻿﻿ ﻿ ﻿
﻿﻿

Color: So the Carnifex in the room was the fact that painting plastic is a huge pain in the ass on almost any day of the week. I'm still not convinced these things are more plastic than they are rubber. But, sometimes you just have to be brave, go for it and see what happens. I wanted a sorta weathered iron look or maybe like a lava rock, picturing what the Ad Mech would churn out in droves and plop onto the battlefield. I stopped at the local DIY and picked up some Rust-oleum direct-to-plastic brown spray and a spray texture in a brown-earthen tone. I mistakenly thought I bought a plastic spray-primer and that was not ideal. 1 coat of brown spray undercoat and 2 of the texture went on well enough but probably won't wear very well from what I could see. My tests show that something like a brush-on plastic primer is best for plastics like those I'm using here. Something else I didn't do at first, but did later, is to wipe down the plastic with paint thinner first for best paint adhesion; that made a difference. Scuffing the plastic with fine grain sandpaper may have have helped as well and would be mitigated by the spray texture to an extent. I'm counting on the fact that these bunkers will be handled well (by me) and so I'm not sweating wear too much. So, learn from my first mistake, make sure you get a plastic primer when you need it and don't skimp. Here is a sample of the color on the test bunker...


Details: I intend on adding some frost, weathering and snow to the bunkers themselves and creating the bases using my Gorilla Glue technique. I'm planning on making two into "command" bunkers with searchlights and maybe an emplaced heavy stubber. Details can eat up the real estate normally occupied by models in play and nice touches like stubbers end up breaking off eventually so I'm weighing my options heavily.

Up Next: Part the Second, The Killing Floor
Posted by Yeti's Yell at 9:42 PM No comments: 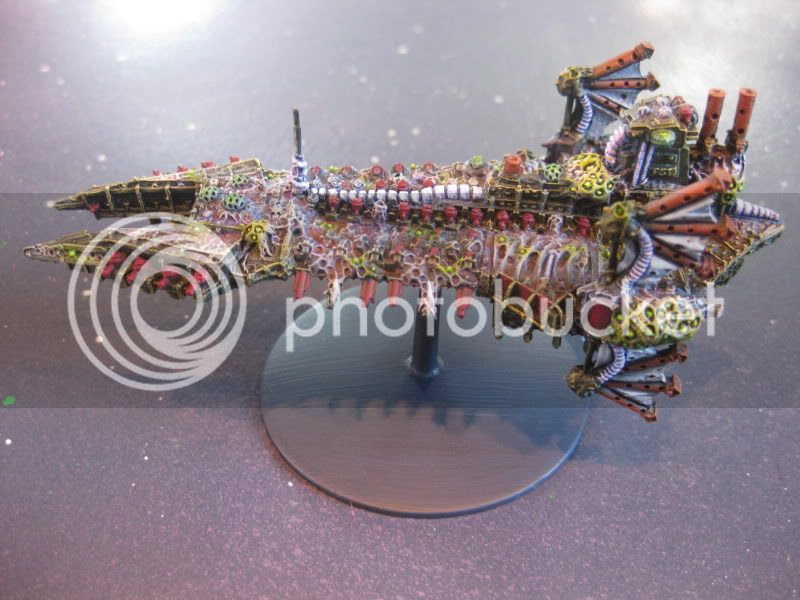 So here she is, the Terminus Est. I may touch up a few things here or there like making the sails more putrid looking but that's basically it, she's ready to get underway. I added some old raptor jump packs to the side and a good amount of greenstuff. To see the WIP, go here. 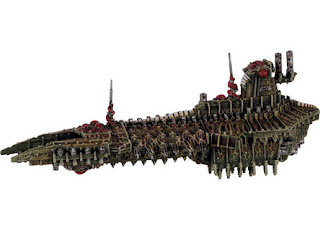 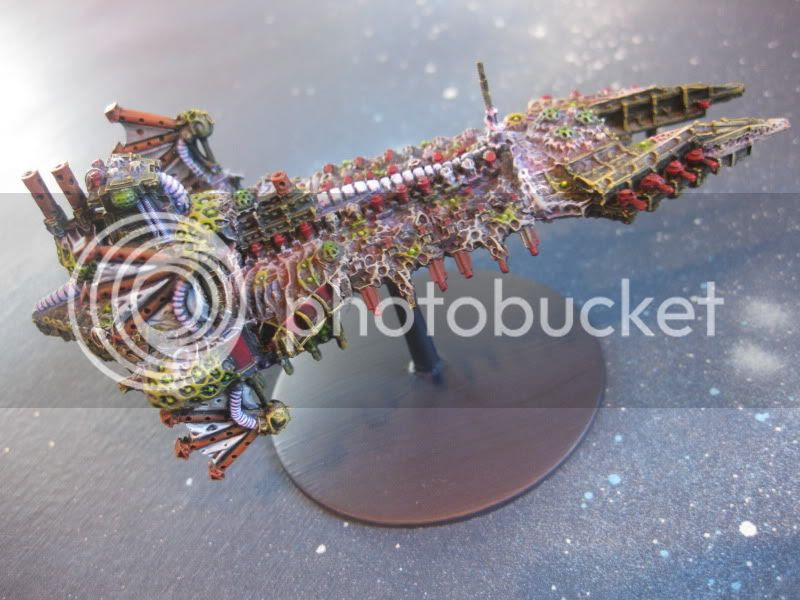 Here's a WIP of the Terminus Est conversion I started a bit ago. 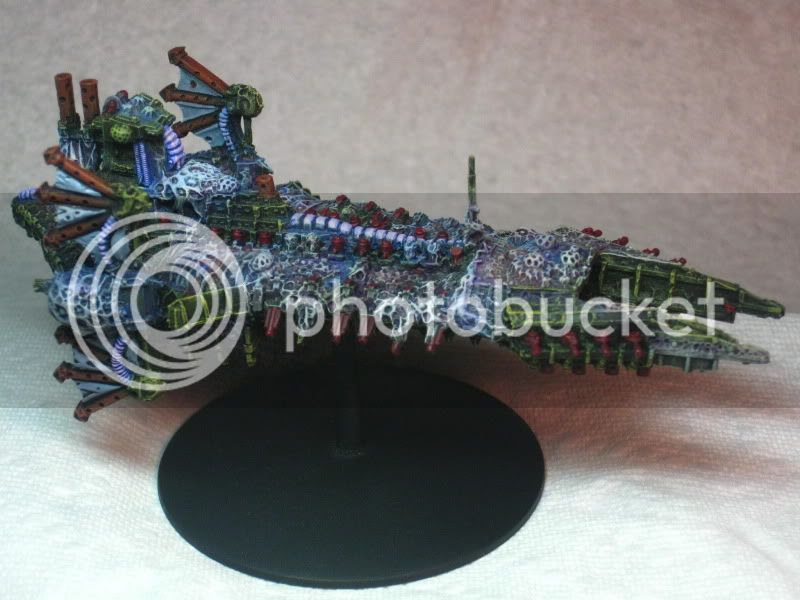 And here is a Chaos cruiser built and painted by my 7 -year-old son, Nate! That's my boy! 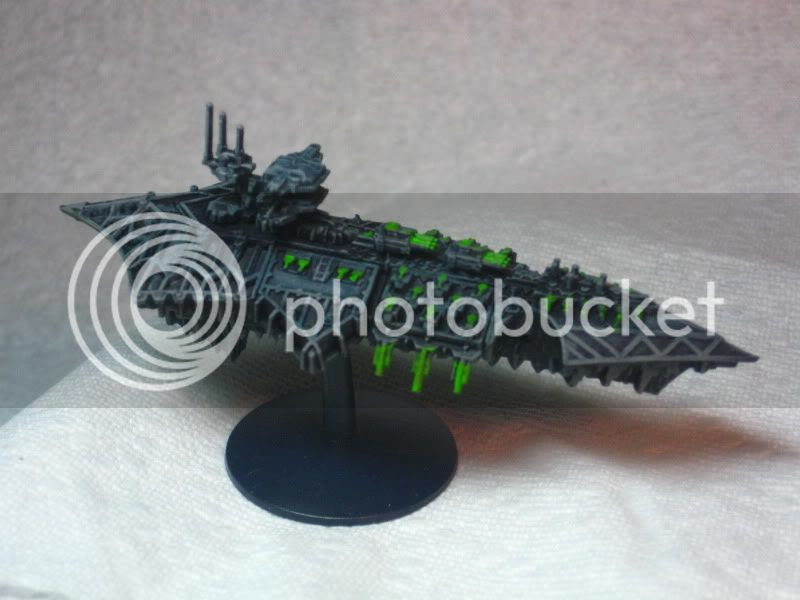 Yeti News: Russian and US Scientists Form Bucket of Water and Shape of a Gorilla to hunt Down the Yeti