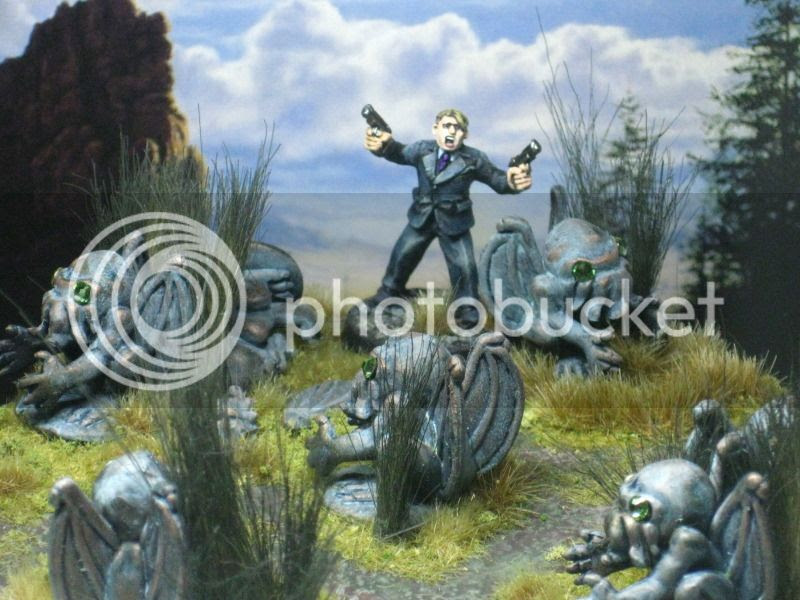 Confusingly, up next is my first Scene of Horror, posted after the previous two went up. I must have thought I had posted this but I see I did not, so here it goes... I really like that the Strange Aeons game allows scenes to be whatever you want, to model them as such and portray a story. 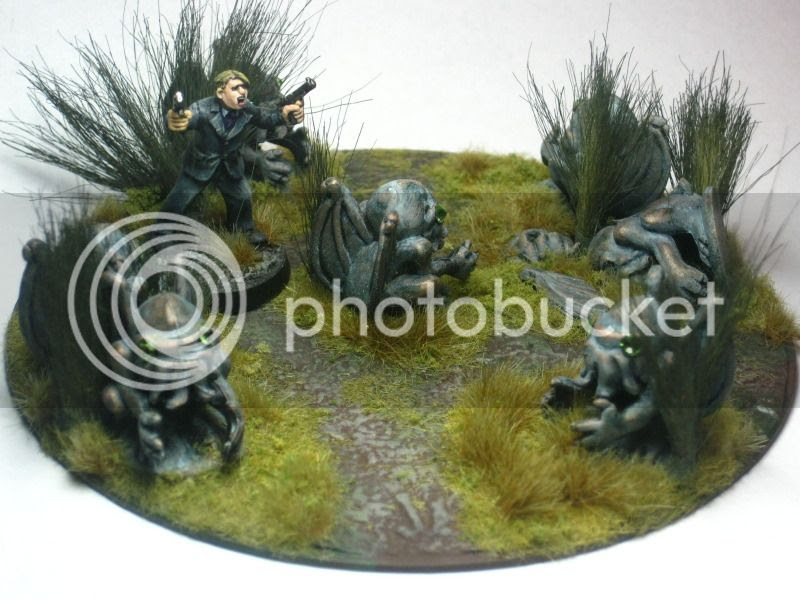 So, like the second and third scene of horror posted previously, I covered a CD with textured wallpaper and primed it with heavy duty primer. I then used black primed Mini Mythos markers for the statues, which I arranged with enough room to allow for standard bases to move through the scene.

I painted the statues like bronze and added emerald green 4mm gems for eyes. 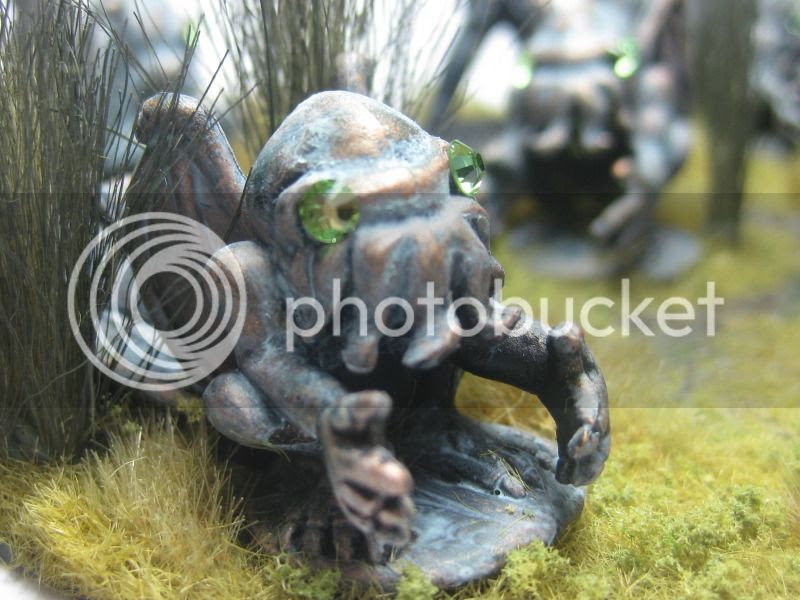 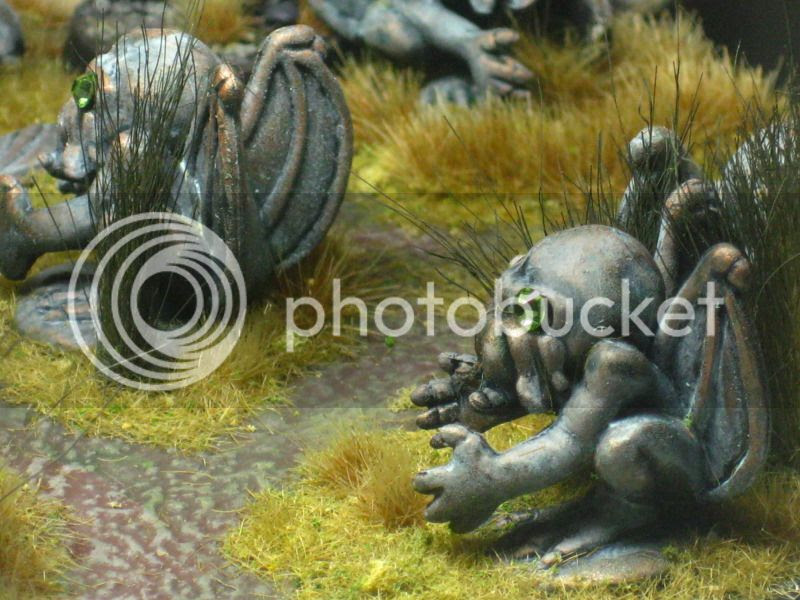 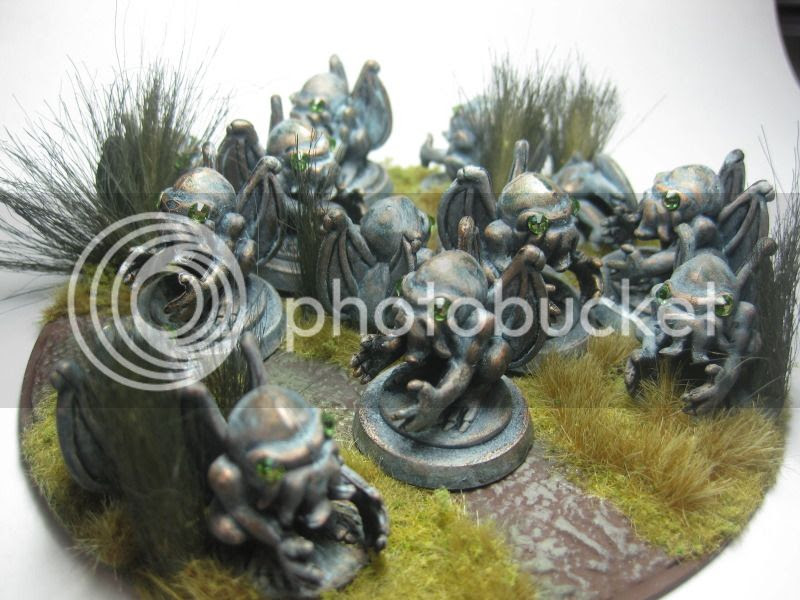 From there, it was straight basing of paints and flocks along with homemade bushes. I also made a batch of the same markers on bases, to fill the scene or use elsewhere on the board as pentagrams or whatever. here you see them with the large FFG Cthulhu plastic marker I painted for the Ritual Site, for scale. 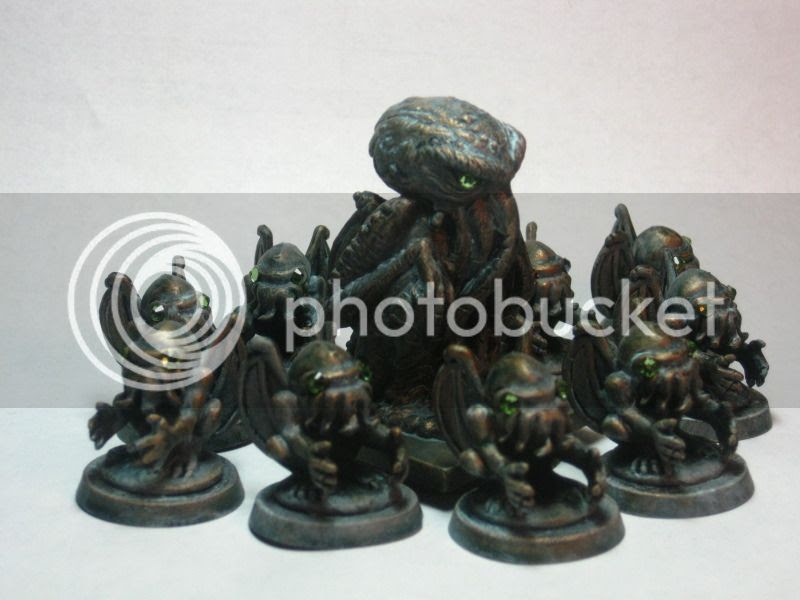 And now for some fluff-justification explaining this damned Scene of Horror...

To All Mid Atlantic Field Agents,

Please see the attached photo. Our agents detected stories of a latent power in the dense woods of a protected Indian reservation on the peak of Clausland Mountain, in the rustic but beautiful village of Nyack, New York, opposite Sleepy Hollow, across the Hudson river. They discovered yet another site of ancient statues which our office has labeled "conjunctions". Agent Connery and his team risked an attack with thermite explosives on one of the statues in an attempt to silence what they called "turbulant and thundering songs" in their heads when they seemed to fall under a spell of the statues on that hilltop.
The diminutive statues of the elder god are estimated by our archaeology department to be as old as 6,000 B.C., judging from the matching composition of meteoric metals originating from similar statues acquired from the Nepal region. It seems like these Tappan statues have been at this location for almost as long as that, despite the fact that no similar meteorite has ever been found felled in this part of the world that could yield that same bronze-like material for their fabrication; only of the Luxor meteorite have we found  the same metallurgy, the same which kept turning up in our international reports over the last several years.
The cultural products of symmetry, naturalization and symbology trace to possible sample origins of the elder god statues from Prepottery Neolithic culture though the American and European statues imbue more modern Greco-Roman human morphological influences. There seems to suddenly be many sites like this around the Eastern seaboard, dare I say an outbreak, if only because we are now looking for them or perhaps, since they want to be found, as Agent Petri has mused.
At first glance, the positions of each statue at each site seemed random and disordered. After my team's thorough surveys were completed did we compare the well-rendered schematics of the major regional scenes. They showed that the bearing of each statue corresponds to the same stellar constellations presenting in their ascension and declination every solstice… at precisely the exact same aspect/time for every site no matter the location. In effect, the statures are each “observing” either the same major star systems as the other statue sites at the same time or each other, in complex, rhythmic order that defies the arts and sciences we have at our disposal even today. In the most extreme case a toppled-down statue site was postulated as not being a cast-down site but instead it was looking face-down and inward through our planet to the same galactic transits as the other sites observed on the other side of the world. Imagine our concern with those implications.
Never have we witnessed en masse coordination like this, even more so than the preformative studies of solstice “tracing” by the Egyptians with their statuary along the Giza plateau. That global sites are overgrown, remote and perfectly synchronized with sites across our country and those reported in the Pacific basin and Asia minor… I shudder to think of the intention behind the loathsome, squat and alien watchers and what means they serve now.
Having interviewed the current leader of that Tappan Indian nation we were left with more questions than answers. The tribes have many stories of the sites though no admitted explanation of their existence. When asked why the sites have been curated for so long by them and hidden from us at the same time, the elders simply denied the fact of the history with their involvement at all, too quickly for my tastes. I sense collusion.
Ladies and gentlemen, we must discern and detect before we prosecute but do not hesitate to react. Ready your teams and prepare for the field, you are to deploy as soon as your receive further instructions.

God Bless us All.