This is the first Battle report for Strange Aeons that I played with my group, with my Threshold team facing Pete's Lurkers. This was a standard 15BP start on both sides, with all minis and terrain painted/assembled by the fantastic Pete Ceretti. The mission was Fight with Pete going first. Special rules include 1 Action to open the Cemetery Gate and walls giving a Medium cover save. We didn't use Advanced Rules in this game. Since the game was over in 28 minutes and was mostly double moves until the shootout at the OK Corral, I thought a narrative start would be a good report while setting the stage for the story arc of future games. The condensed results are the picture captions.

Threshold Agent Connery, Agent Petri and William Forsythe, PhD had spent the last five minutes following the dull ruts of the overgrown carriage path through a twilight rain, where it emerged abruptly from the greyish-green bracken onto a large field behind the dark, hazy church. Connery scanned the old grounds for movement amidst the growing shadows and early Fall drizzle, deftly drawing his twin blued 45’s and cocking their hammers, as one, in practiced silence. Petri had already unslung his Thompson submachine gun back around the bend, him already having added a fresh drum and charged the weapon, the noise buried beneath creaking tree limbs, chirping cricket calls and the mounting hiss of rainfall on canopy. Petri looked out from under his dripping fedora hat, to see if they were followed, though he already knew they were not.

Forsythe could only start at every snap of twig, tik-tak of falling leaves or the crunch of Summer-dried turf beneath his feet. He had done fieldwork as part of his degree and had an eye for it but perhaps not so in this state of affairs. He took in the scene. The wet hay of summer's grass smelled like warm tea as the rain bands came in on a chilly wind. To their right was a freshly-erected tombstone that glistened bone white with veins of green and a yawning, slimy grave, halfway opened in the wounded old ground like the rictus maw of the dead. Forsythe held his dad’s pistol out ahead of him as his father had taught, the cloying hint of lubricant riding over the wet rot smell that wafted upon the cooler air of the damp woods behind them.

His father was dead now but he would not be buried here, if it was the last thing Forsythe did; though he estimated it may very well be. In his trouser pocket clinked the medal of St. Anthony which was attached to the key of his late father’s new automobile, parked on the fire road back up on the hillside from where they had started.

Agent Connery nudged his elbow into Forsythe’s chest, gaining his attention. “There are no rules here now, boy-o. You got us this far and we appreciate it. I’ll ask you one more time to leave it to us. We believe what you say now but you are in the same kind of danger that your dad was in this morning.” Forsythe felt Petri’s large, affable hand on his shoulder. Connery continued, “So, if you stay you listen to us and don’t do anything more stupid than coming with us to begin with.” Forsythe didn’t reply so Connery reached over and pinned a deputy badge on the breast of Forsythe’s jacket, uttering, “May as well make it legal, lad.”

As Forsythe nodded, Petri hissed, “Look, behind the tool shed. Looks like your butler Wannamaker has our scent. They must know now, he’s louder than a train wreck.” A jangling shape crashed between the tall grasses in the field above the church, assailing the sky with hoots and yells. Connery tisked, “They don’t know we’re here. He’s running around their graveyard in a dervish, so they have to be coming out for a look. Let’s use it to our advantage.” Petri smiled at that, gently moving Forsythe’s absent-minded pistol out of his own face. 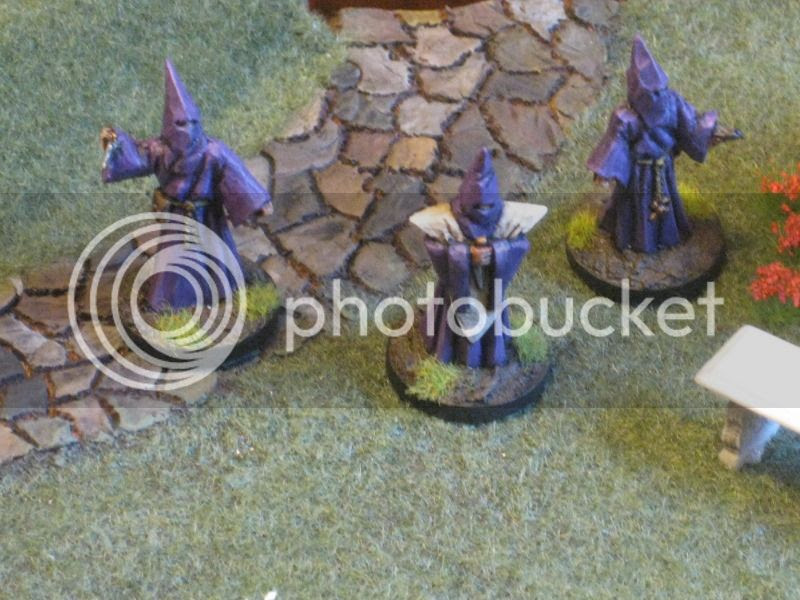 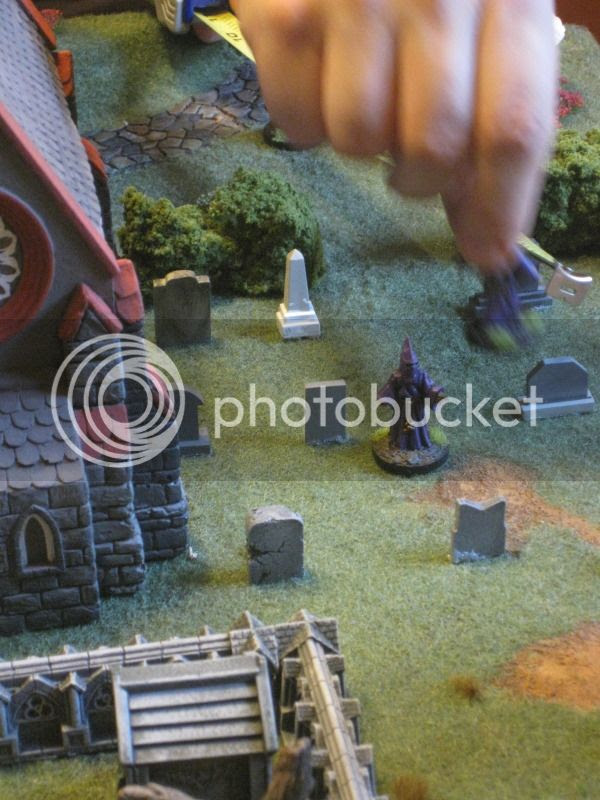 Petri squinted and nodded towards the church, “The circus is back in town.” Men who wore dark purple cowls of The Church of Dagon appeared from the right side of the grounds, cautiously searching around and making for the graveyard between them and the Threshold agents. Petri counted how many men were bearing arms. They still had not spotted the agents but all were armed with something. One yelled at Wannamaker and made a motion like he was shooing a dog. Connery got up from his crouch and started sprinting to the low wall of the graveyard, yelling back, “Last chance! No?!? Let’s go!!!!”

They moved as one, pacing off the slower Forsythe but made the wall just as Wannamaker howled and started down the gentle rise from the tool shed, twigs and debris in the air as he drove at them from the left, in full mania. Petri watched him come in with one eye and yelled to Connery, “Best make the tombs in the graveyard! Other side of the wall!” Petri flowed inside smoothly and Connery pulled Forsythe around the slick rock wall into a row of large, pitted crypts overgrown with weeds and ivy. The insane Wannamaker exploded down the groundskeeper’s path like an emaciated gorilla, driving forward, waving a large cleaver and hollering random nonsense words, “Caught! Catch! Squeeze! Spread! Bleed! Father! Son! All or none!”

Connery was watching the cultists sprinting towards the main cemetery gates, their eyes wide, unblinking and white through their hoods, their ritual knives glinting as they ran. They had to be stopped, their dark rites could not reach fruition tonight in the catacombs below.

Connery and Petri started firing at the cultists, spall erupting along the grey stone walls and pulpy holes popped in the evil, wormy tree trunk next to the graveyard doors. Petri stood square with the door atop a tomb, trench coat hiked back behind his holstered .45 and tommy gun chattering out steadily, walking “ropes” of bullets around the walls and doors with great effect, eliciting howls from the cultists who tried to hide from the onslaught but were caught surprised by the storm of lead. Connery moved behind Petri, adding expert shots with both pistols, each slide cycling off-time with Petri’s machine gun. It sounded like a war as casings spattered through the rain to the muddy ground around them, their gaze never wavering from the cultists.… with their backs to the closing maniac.

Forsythe was frozen in fear as Wannamaker, his father’s butler, bounded in slow motion up to the other side of his wall, his face contorted in amygdala hijacking, impossibly ugly, inhuman and swinging the meat cleaver that killed his father that morning… and it was still stained with blood. William Forsythe’s pistol felt miles away in his hand, tremors and vertigo seemed to shudder him on the spot as the lunatic murderer started to scrabble up the wall, growling, “Meet! Meat! Greet! Eat!” At that, Forsythe blacked out, falling onto the tomb as Connery and Petri blazed their weapons at the cultists pushing on the mossy, oaken doors of the entrance.

Petri saw that Forsythe had collapsed as he looked over his shoulder, yelling, “Wannamaker!” Connery spun and pumped his pistols at Wannamaker who yelped, then crumpled to the lawn, alternating between mewling and roaring.

Gaining his feet, Forsythe stood, just as Wannamaker surged up at the same time, a large swatch of his face removed by Connery’s .45 and dribbled the grey masonry of the wall with blood. Forsythe didn’t so much aim as put his gun as close to Wannamaker as he dared, hesitating. He closed his eyes and heard his dad say, “… just squeeze” as he fired. Connery saw Forsythe hesitating and fired at the same time as Forsythe missed, putting one shot into the maniac’s skull with a loud thwack and bloom of red, then turned to the cultists swarming through the open door.
Forsythe opened his eyes and peered over the wall, seeing a blackish diamond of gore on the ground, an awkwardly folded corpse in a dark butler’s suit. A sense of vengeance swelled his pride as he turned and saw Connery take a knee next to Petri who stood over his fellow agent, shooting into the charging cultists and killing the screaming, stumbling pile with strafing strobes of fire and sound.

Magazine depleted, Petri set down his smoking Thompson, drew his .45 and stood still waiting for new targets. Connery had already reloaded and policed the bodies, including Wannamaker, retrieving the ancient map from the mad servant’s coat, that which Forsythe had claimed stolen from his father. Forsythe started to speak but Connery cut him off, speaking to the dead men at his feet, “He’s not here. He’s not here.” 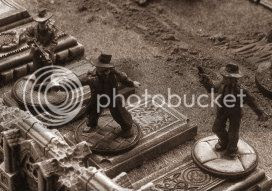 At that, a motorcar tried to start in front of the church but wasn’t turning over in the damp air. Petri was already pulling out the satchel charge as he legged it towards the church, trench coat flapping out broadly, like an eagle taking off. Connery started after him but Forsythe, renewed by Wannamaker’s death, grabbed his arm. “Wait! Where are you going?” Connery, halted by the vitality in Forsythe’s tone, answered, “We’ve got to stop them before they go. What do you have in mind?” Forsythe’s brow furrowed under pressure and thought out loud, “They are leaving… because they can. We could not have stopped whatever they are doing. They were committed to this and so if they are running, it means they can, that they have another option. If they did not they would be fighting to the death now, right? It follows that Wannamaker didn’t have the only scroll. We need to let them go so we can find their other option! I only knew of this coven, as did you. We need to find the other one. There is only one route back to town they would take which happens to run past the fire road on which we parked. We can get to my dad’s auto and follow them!” Connery pursed his lips as the rain pattered on his face and said, “You mean your auto.” He considered the lack of counter-attack and the dark automobile now moving through the trees away from them. “You may be right. Petri? Bring it down and let’s go.” Petri pulled the primer cord and fell back to the graveyard walls, muttering a prayer in Italian, clomping up to them with a stop just as the dynamite detonated behind him. The fieldstone building tumbled down, filling the sub cellars in tons of rock, timber, fire and dust. He exclaimed, “What the hell are we doing? Dissertation?” Connery laughed and said, “Something like that. The professor here has a plan. I knew we brought him with us for a reason. Petri, you’re driving. And Forsythe… nice shot back there.”

Give it up folks, for the Threshold and also to Pete for the amazing terrain and figs!

Awesome job on the batrep! We'll need to take more pictures next time.

Great batrep! Did anyone advance in skills?

Thanks Styx! My main character can advance but I didn't decide what to do yet. I think I'm going to do a statline advance on Attacks. Some of the Lurker monsters I could face at 16 points can easily tear me up in CC if I can't shoot them first.

Suggestions for a starting Threshold band?