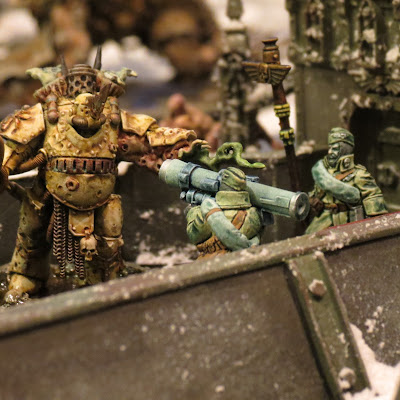 Jason from Headwound minis came by with his Nurgle forces and we played the first in the series of Planetstrike missions from Chapter Approved. We talked for a bit beforehand on how to organize games into a narrative campaign of sorts, linking them into a story that should drive both our play and building/painting while at the same time seeing us willing to improvise a few things here and there for the sake of fun play and good stories. 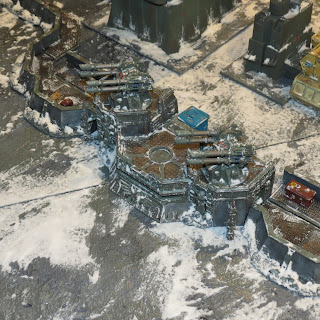 We kicked things off with Jason getting a points credit in the fortification spending I did, on top of my 1500 points of Valhallan garrison. In the end, I took a Firestorm Redoubt, Imperial Bunker and some freshly painted Defense Line (old Forge World pieces.) I also took a mixed list of Valhallan trooper squads with Heavy Weapons/Assault Weapons, Company and Platoon Commanders, Special Weapon Squad with Flamers, Officer of the Fleet, Master of Ordnance, Techpriest, Command squad with rocket launcher and Company Standard, Hardened Vets with Meltas and Heavy Flamer in a Valkyrie, Wyvern, a Hellhound with  Inferno Cannon and 2 Lemans, both Vanquisher and stock.
Somewhere in the driving snows was the Eversor known to local officials as the Ghoul of Hammerfall. 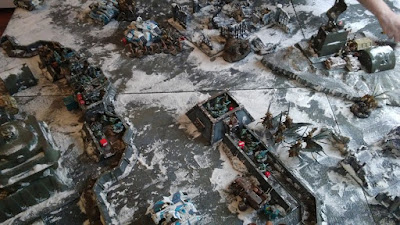 Jason brought a dripping mixed bag of Typhus + zombies, Poxwalkers, Drone, Plague marines, Maulerfiend, Daemon Princes, Nurglings, Cultists, Plague Drones, Blight Hauler and a Nurgle Sorcerer who waited all game to show, but given the game was conceded on Turn 3, it mattered very little. We didn't take elaborate notes or take tons of pics so I'll summarize via words and images. 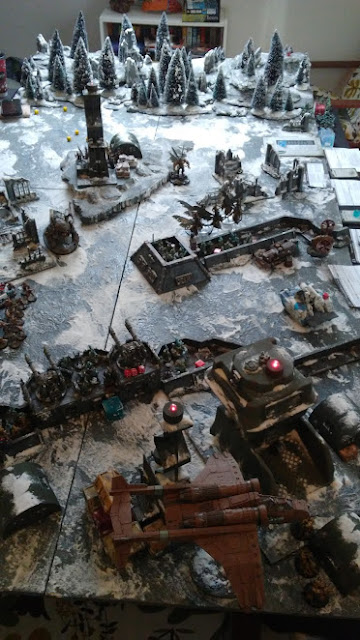 The opening Chaos bombardment thinned the Valhallans unlucky enough to be caught outside in the open. Vehicles on the move had their suspension rocked, crew shaken, and some minor damage as well.


The fortifications stood fast and once the bombing stopped and the icy winds cleared away the smoke, a hazy image of Typhus emerged from a seething black cloud of flies, which churned around the ancient Nurgle lord. He was close enough to the leading Vanquisher such that the accompanying plague zombies washed over the hull before the driver could skid to a halt and reverse, as the panicking gunners wracked and traversed their weapons towards the surprise threat. 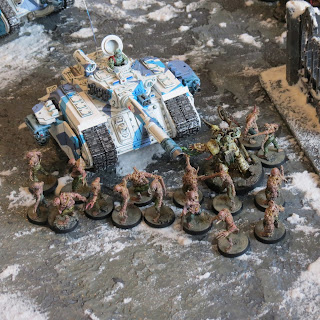 Plague Marines and the Blight Hauler emerged from the ruins near the farthest defenses, and lurched at the passing tank convoy. Fire washed between the forces and the Valhallans sent everything they could from the snow-clad bunker walls, out into the shimmering gale, as Nurgle forces teleported into the fray. Sweeping lines of Icarus lascannon fire swept against the emerging Nurgle forces to little avail, even as Nurglings swarmed in through the Imperial back lines to claim objectives. 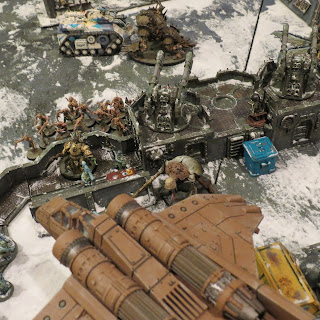 Above, the hovering Valkyrie  struggled to keep station in the sheer, as it loosed lascannon and braces of frag rockets into the roiling Poxwalkers, who were suddenly in among the terrified guardsmen, who each wheeled around to receive the charge and abandoned their covering fire into no-mans land. 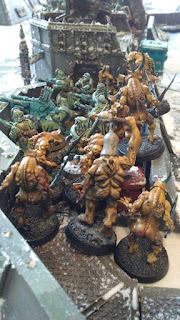 A violent series of airburst explosions strolled across the battlefield as the Wyvern crew mechanically fired with trained speed at a truly insane field of battle, while men fought for their souls, even as sickness started to overtake them, their weapons defiantly blunted the Nurgle advance. 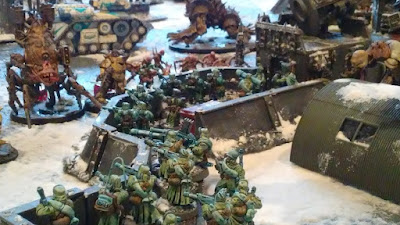 The Leman convoy slewed about and broke their line of advance as they tried to shake loose the undead and blashemous which clung to hulls and reached in through viewports with sloughing, dead limbs. The Techpriest, incensed at the damage done to the Vanquisher, rushed out of the redoubt, and initiated combat repair protocols on the large battle tank. The Hellhound set the bulheads afire as Poxwalkers, zombies and newly-risen Valhallans twitched and writhed in prometheum. A mix of Orders and Strategems wielded by Captain Gloval of the Valhallan 554th created furious resistance until the calamity. 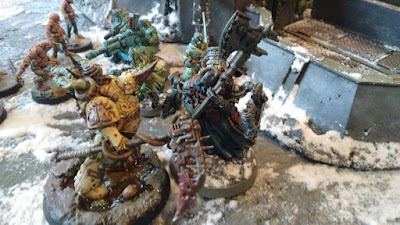 While Typhus flanked the wounded Vanquisher and slew the Techpriest in single combat, the Maulerfiend and a Daemon Prince thundered through the warzone, straight against the front ports of the redoubt, even as the quad lascannons speared them with thunderous blasts that vaporized the snow fields before them. With surprising speed, the Warp things dug and melted their way to the inner chamber of the fortification and triggered the plasma-furnaces atop the power grid. With a catastrophic chain-detonation, the redoubt exploded and unleashed scything shrapnel and concussive waves, which crushed everything in a wide area of effect (11" radius damn it!!!) Many Valhallans on the ramparts died instantly and not one Valhallan was left unwounded in the blast zone. The Imperial back had been broken. 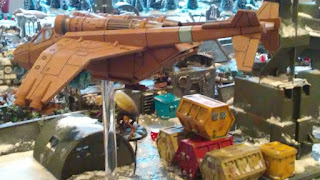 As Typhus himself gained the Imperial deckwork, and his ranks of zombies swelled by the minute. The Valkyrie spent all ordnance onto the conflagration that was the base, helpless to stop the violent end to the ragged remains of the ordered Valhallans. The burned hulks of the Maulerfiend and Daemon Price clambered from the electric fires and burning craters as the Imperial Bunker nearby collapsed, the occupants just escaping in time to be dissolved by a looming Daemon Price astride the trenchwork, tall in the soot and snow.

Spent, the ice squall which had covered the battle with freezing sleet seemed to ebb away and be replaced with a miasma of steaming offal pools, fire, and charred Imperial equipment. Those men lucky enough to escape into the forest past the clearing soon fell where they hid, and even as they quickly stiffened in the sub-zero temps, their lungs wheezed and popped with thickening warm ichor as fever burned out their skulls, and the Warp reached for them... one by one.

Excellent battle report! I like the narrative style - I think I must have had what your poor Valhallans had.

Yeah it was a rough day in the Guard for sure, but I have to note that I was being outplayed even before that detonation!

Cool stuff Yeti! Looking forward to the next invasion.

Catching up on your blog... nice battle report... sucks to be those Valhallans.