I picked up the B Wing on Friday. Love the ship, stats, cards and what it brings to the game. Don’t like the pose. Nothing wrong with it really, it does make sense as a production pose for the game. Still, I prefer the asymmetrical pose, so I decided to re-do the B Wing.

In all, this was a 20 minute task, most of that time was spent going slow and making sure that I did not put undue stress on any wings, cannon barrels or anything else. I did not break a thing. 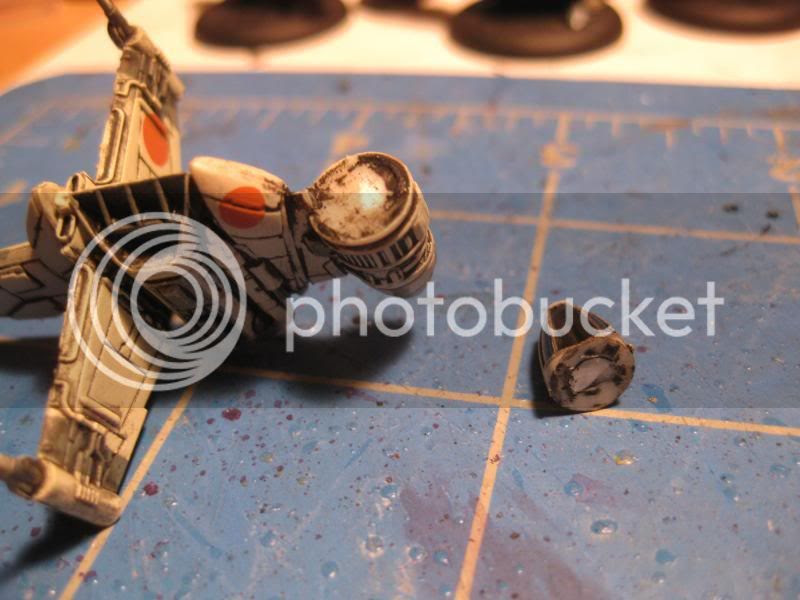 First, pop off the cockpit. It seems like this piece was a glued part with a peg so you’ll just need a sharp X-Acto to break the paint layer and chop that peg. Trim the surfaces back to flat and dry-fit in the position you want. Don’t glue it yet, set it aside. 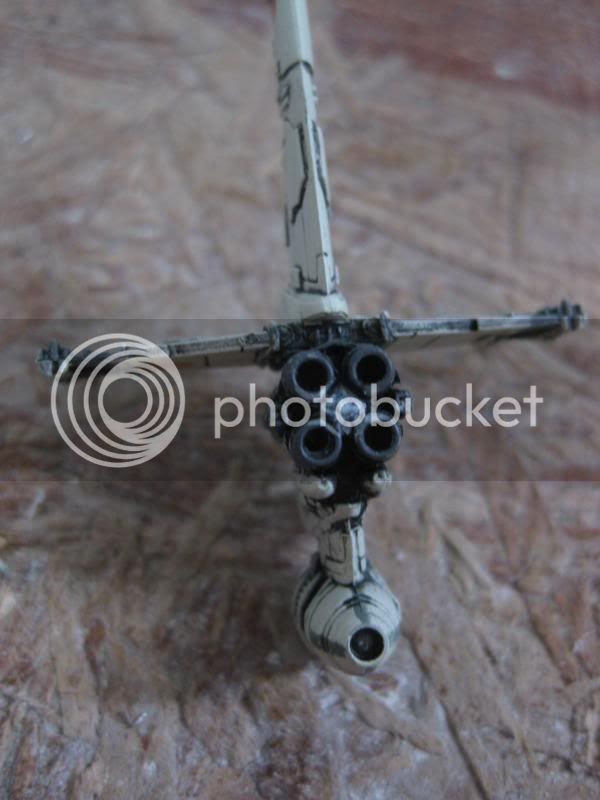 Second, remove the female peg for the flight stand. I just slowly rocked it back and forth until I was able to pop it off. It did leave a clear piece of peg between the four engines but I smoothed that back down with the thin edge of a file. Just get it smooth. Once done, hit it with some black paint or wait until after everything is together. 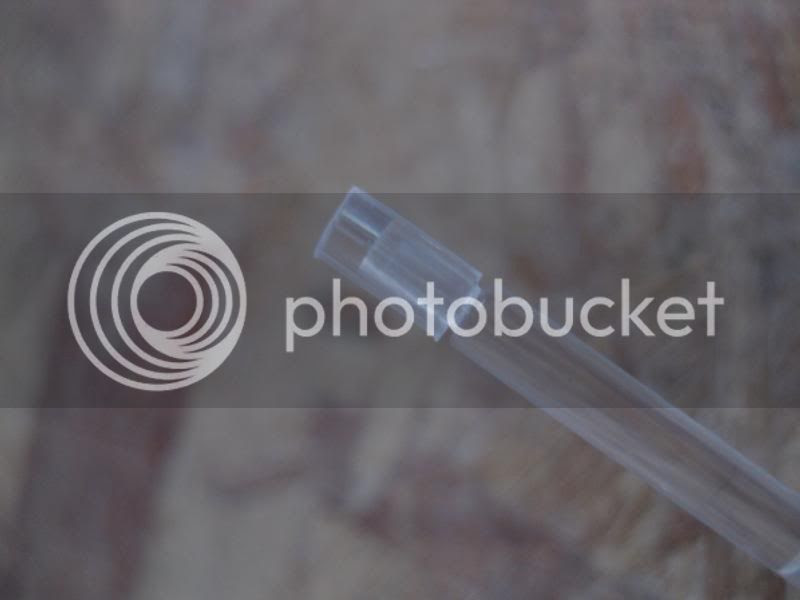 Take the female peg and insert a male peg, seeing where the male tab shows though, when seated. Make a cut on the female peg at least 1/8" away from the top of the male tab inside (yeah, I know, mine was less). Clean it up after you cut it. Make sure you set the trimmed female flight peg aside, you’ll need it. 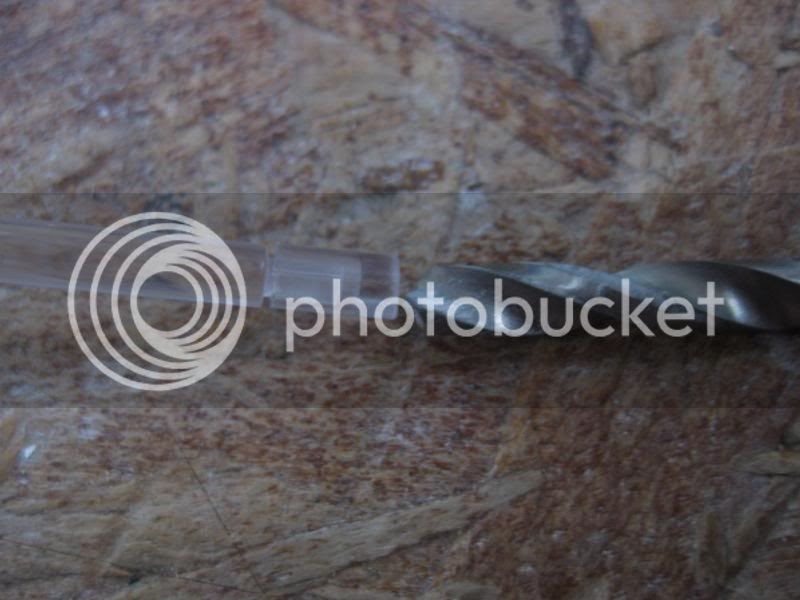 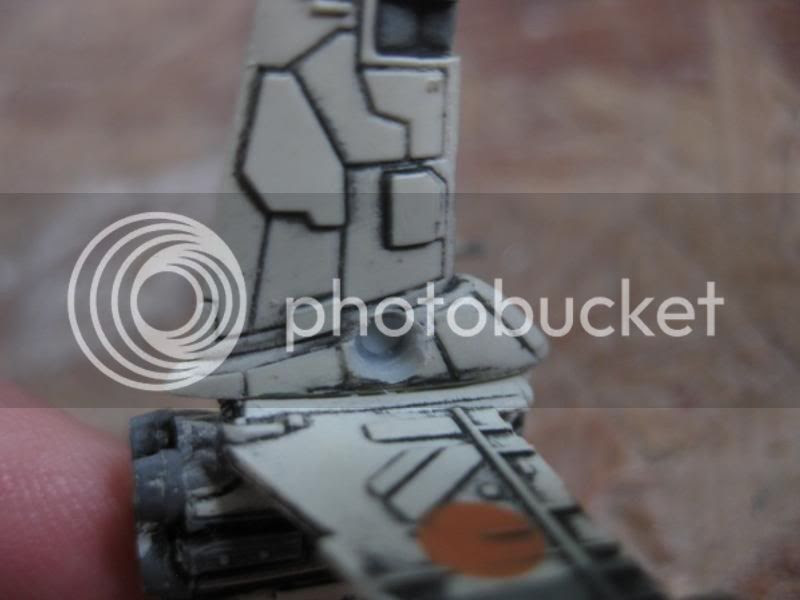 Third is the trickiest part. You’ll need to be sure that the male flight pegs are centered on the B Wing ribs. True, the ship doesn’t weigh a lot but you want it right over the flight base footprint. The cleaner you make the hole for the female flight peg, the easier the ship will come on and off… the pose is better IMHO but you may find yourself pulling the ship off the base in heavy table traffic. So, look at where the main “sail” or wing attached to the engine cluster. You’ll see fairing that looks like 4 ribs. The 2nd rib from the front of the ship is where you put the hole for the female peg, that is center. Mark it with a pen or just go for it. Use a smaller bit than 1/8" for the pilot hole. DO NOT GO DEEP OR YOU WILL GO OUT THE OTHER SIDE of the ship. I suggest tapping the pilot hole by hand, skip the drill. After that, use the 1/8” bit to make the hole for the female flight peg, being mindful of your bit: make sure you are drilling as vertical as possible. Again, DO NOT GO DEEP. You may get frustrated at the cut speed. The ship material is like cold plastic or vinyl and so, it won’t cut fast. If you use a drill, don’t be tempted to give the drill more juice or you’ll pop a hole out the other side or worse, it’ll grab the model, spin it like mad and you’ll break wings or cannon grabbing it. Test the fit and work it so it can press fit or hold with glue. Once the hole is ready, put the female peg on the flight stand, MINDING THE DIRECTION ARROW on the stand. Take a minute to practice putting the B Wing on the female peg. Once you know which way is forward and you are ready, add a bit of Super Glue to it and attach the B Wing, making adjustments as necessary for flush vertical and horizontal if that is what you want. DO NOT PRESS HARD or you may snap the flight pegs or worse. Let dry for a few minutes. 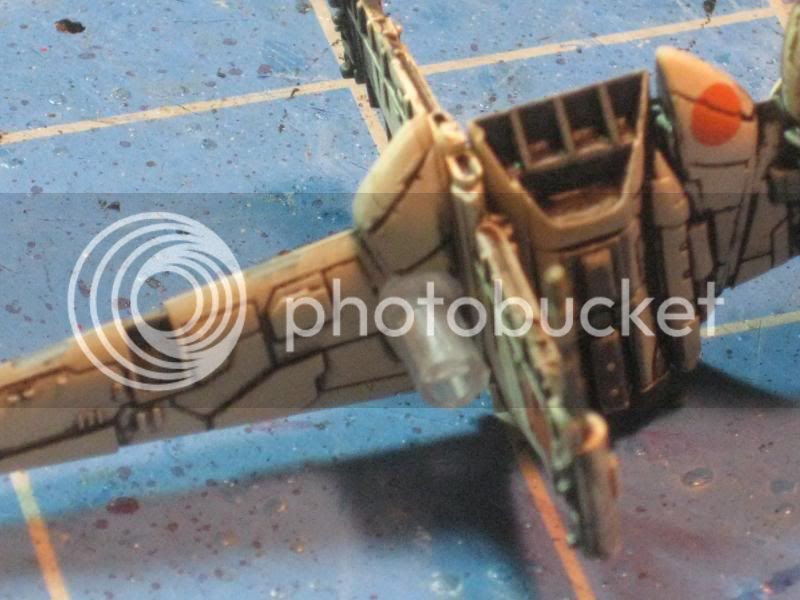 Almost there. Glue on that cockpit. Remember the cockpit? Yeah, find it again and glue that on, making it level, remembering the cockpit was supposed to move and stay level as the ship barrel rolled around. 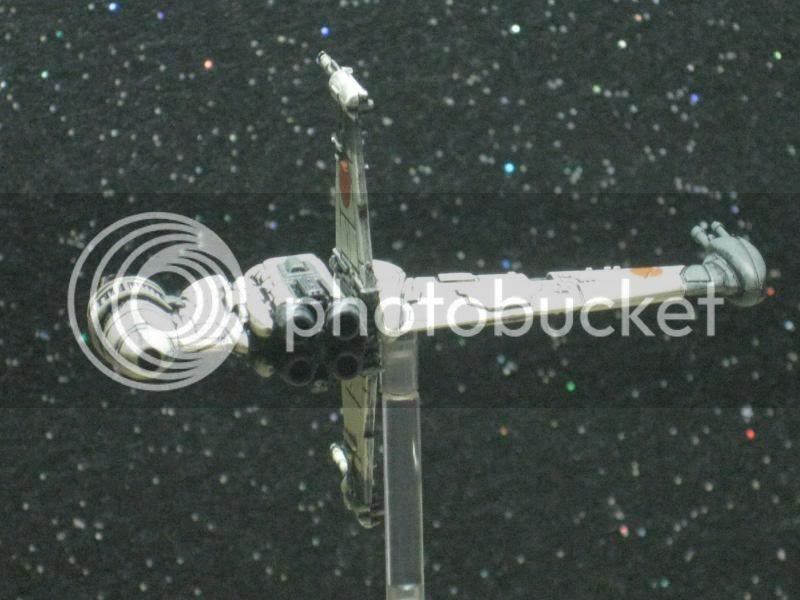 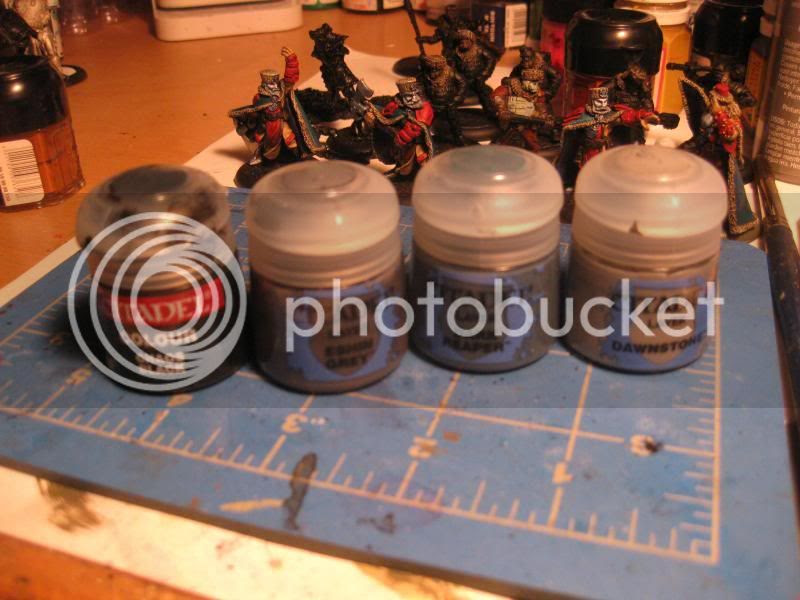 Finally, re-touch the paint. Put some black over the trimmed peg at the engine clusters, grey on the engines. I'm gonna add some engine glow to mine sometime soon. Maybe you are more ambitious than me.

Attach your B Wing to the flight stand and enjoy!

Awesome. I'll have to try this. It will be nice to have it in this position as that's how I always imagine it. You, Sir, are a rock star!

Thanks man! If you try it let me know how it goes!

My favorite thing about projects like this is the part where you go, "Ok, I have no idea what I'm doing but let's chop up this $20 model!"

LOL. Well, I like to think I bring about 26 years of experience to the deal too. Seriously though, the only difference between this model and anything else I've made is that this is painted. I've chopped and modified plenty of painted and or completed minis before too. If you have played Mordheim then you know what I'm on about. What gives you the most bravery here is the confidence that you can match the paint color for touch ups; with pre-painted you don't even need to be picky to the norm!

Very, very nice! Thanks again for sharing it with me and the bikini aficionados!

I feel like everytime I say something like "Well, I like to think I bring about 26 years of experience to the deal too," the corollary is "So I'm real good at screwing everything up."

I'm actually kind of ok with the other B-Wing pose, but this one is definitely what made it my favorite in the Star Wars pantheon.

I did something similar, but kept the stand the same and added magnets to the bent piece and drilled into the engines to inset the magnet there.. now I can fly it sideways and when it gets in the way of another ship, I can stand it in the original way it came.. just thought I'd share that with you guys

Heres the quick and dirty method for the noobs, like me. Just pin your B-Wing on the usual 2 pylons.
Hold a lighter with a small flame directly under the upper pylon for 3 seconds (it will become opaque).
Than just move your B-Wing in the wanted position and wait for the pylon to become transparent again. This way u can use your B-Wing in both positions and if you fail just one plastic pylon is lost.

Interesting idea, thanks for sharing! You too Gunnar!